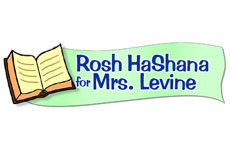 A little boy feels guilty for bothering an old lady and ends up arranging a beautiful Rosh Hashanah meal for her.

The elderly lady, Mrs. Levine, lived alone. She didn't go out much because of her leg problem. It was difficult for her to walk, so most of the time she just stayed home. All alone, lonely.

Little David Finklestein lived across the street. Now and then he and a few other kids would bother Mrs. Levine -- just for the fun of it. They would quietly sneak up to her door, ring the doorbell and then go hide in the bushes. Slowly Mrs. Levine would make her way to the door and open it. "Who's there?" she would call. "Who rang the bell?" From the bushes the boys would watch and laugh.

One time just before Rosh Hashanah, David was bored. All by himself, he made his way to the doorstep of Mrs. Levin's house. Like other times before, he rang the bell and then hid in the bushes. But this time she didn't open the door. David thought, maybe she didn't hear. After all, she is an old lady. He decided to try a second time. After he rang, he put his ear to the door to see if he could hear her footsteps in the house.

"Who's there?" called Mrs. Levine from inside without opening the door. "Please come in. The door is not locked."

David didn't know what to do with himself. "Please, please come inside," she called again.

He decided that he should go in. He opened the door and slowly walked in. The elderly Mrs. Levine was sick and laying in her bed. Her face was pale and sad.

"Oh, David, it's you. How are you? What a good boy. You've come to visit me because I'm sick. That's so nice of you. All year long it is good to be nice to people, but especially today, the day before Rosh Hashanah."

"Please, please, sit down. I haven't been feeling well," Mrs. Levine said. "Tomorrow I won't be able to pray in the synagogue like every other year. Will you do me a favor? Will you pray for me on Rosh Hashanah?"

David just listened. He was ashamed of all the times he rang her doorbell and ran away.

"Ask God to send me a speedy recovery, that I will be able to get back on my feet. Ask that I will be written in the Book of Life for a good year. Will you do that for me David, will you?"

David felt that his face was red from embarrassment. He ran out of her house as quickly as he could.

Then she heard voices near her door. Who was it? The door opened and in came an entire family. It was David Finklestein and his family. His parents, his two brothers and his sister.

"Shana Tova, a good year," said Mr. Finklestien. "We came to wish you a sweet new year. David told us that you weren't feeling well, so we wanted to come make our holiday meal together with you. Is that alright with you Mrs. Levine?"

"Bless you all," said Mrs. Levine as tears of joy trickled down her cheeks. "But I don't have anything to serve you."

"Nothing to worry about," said Mrs. Finklestien. "We brought all of the food. No need for you to do anything."

David and his father set up a folding table next to Mrs. Levine's bed. They spread a beautiful white tablecloth on it and Mrs. Finklestein got the table ready. She held up the jar of honey and said, "This if for a sweet new year!" Then she sliced some apples and put them on a dish. There were two beautiful challahs that she covered with a cloth. Mr. Finklestein took a cup of wine and recited the Kiddush. After that they washed their hands and sat down to a very happy meal. The whole family sang songs and made Mrs. Levine feel so good.

"I'm sure we're going to have a wonderful year," said Mrs. Levine.

Q. Why do you think David went in the house when Mrs. Levine called. He could have just run away?
A. He felt guilty for having bothered her.

Q. If David would have been together with his friends at the moment Mrs. Levine said to come inside, do you think he would have gone in? Why?
A. When we are with friends we tend to feel a little tougher than we really are. The fact that he was alone, certainly made it easier for David to go in.

Q. Did you notice that David never really said he's sorry for what he did to Mrs. Levine. Do you think it matters, or perhaps it was enough that he arranged a beautiful Rosh Hashanah meal for her?

Q. Mrs. Levine thought David came to visit her since she was sick. Have you ever been in a situation where someone thought you were doing something good, but really you weren't? How did you feel?

Q. Do you think David will ever ring Mrs. Levine's doorbell and run away again?