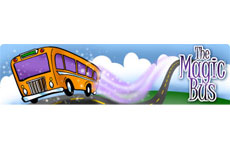 Find out how two friends experience the joy of forgiveness.

It takes a lot of courage to say, "I'm sorry." We all sometimes say and do things to others that we wish we hadn't. Nobody's perfect. Yet, when it comes time to admit what we did and make amends, something inside of us seems to hold us back, and the bad feelings can remain.

The High Holidays, and Yom Kippur in particular, are a time of healing. It is a time when we approach each other and God to try to heal of our relationships with them. It is beautiful Jewish custom for people to go out of their way in the days before Yom Kippur and to sincerely ask for and grant one another forgiveness for anything that might have come between them during the past year. Then, we truly start the New Year off with a clean slate, which is a wonderful feeling.

In our story, two friends experience the joy of forgiveness.

Lori Levin got this strange feeling as she was waiting at the bus stop. Without even having to turn around, she knew she was being watched. A moment later as her bus pulled up, Lori casually glanced behind her. Right away, she understood -- Beth was right behind her.

Once Beth and Lori had been close friends, but for the last six months the two girls had hardly said a word to each other and had even avoided eye contact. They pretended to not see each other, just like they were doing now.

As Lori boarded the bus, she hoped that she would find a seat far away from Beth. When she sat down, her mind started to wander back to that awful time six months ago.

Lori had lent Beth one of her favorite music cassettes. Lori stiffened as she remembered how Beth had given her back the tape broken and unraveled and how she had had the audacity to claim it had been like that when she borrowed it.

As Lori stirred from her daydream she noticed that Beth had taken a seat a few rows in front of her. The bus was nearly empty. It was going to be a long trip. Lori thought about how much nicer the ride would be sitting together with a friend. Six months ago she would have excitedly called Beth over to sit with her ... but now she could only pretend not to notice her.

Lori sighed. She tried to read the book she had brought but her mind kept drifting back to her former friend. "That silly cassette is long gone and I don't even care about it anymore ... but unfortunately, my friendship with Beth is also long gone..." Lori thought wistfully.

Suddenly the bus driver's scratchy voice over the intercom woke her from her reverie. "Park and 34th, next stop."

"Oh, that's my stop," thought Lori, as she gathered up her shopping bags and started to get up.

When the bus stopped, Lori moved toward the back exit. She felt that same feeling of being watched that she had at the bus stop earlier.

As Lori stepped down to get off the bus, one of her shopping bags got stuck on the handrail. She turned around to loosen it and saw that Beth was standing right behind her -- she was getting off at the same stop!

It was an uncomfortable moment as Lori struggled to loosen the handle of the bag from the handrail. "Here, let me help you, my hands are free," said Beth in a quiet voice, as she easily dislodged the bag. The two girls stepped onto the sidewalk.

"Thanks," said Lori, smiling uncomfortably. She realized it was the perfect chance to try to make up with her former friend.

Even though she was scared and part of her wanted to move on, Lori decided to take the risk. "Er ... listen Beth," she said. The other girl's eyes met hers. "I, ah, just wanted to say I'm sorry about what happened between us. I can't say for sure that the tape hadn't been broken before I lent it to you... and anyway it doesn't matter now. Please forgive me for accusing you."

Lori waited hopefully and saw her friend's face melt into what looked like a cross between laughing and crying. "Of course, I forgive you," Beth exclaimed. "But please forgive me! When I told you I hadn't ruined the cassette, it wasn't exactly true. I think maybe I did put it in the tape player wrong or something. I guess I was just, you know, embarrassed to admit it. I'm so sorry."

"Consider yourself forgiven!" declared Lori with a big smile. Throngs of people bustled down the busy city sidewalk on the windy, gray day. But Lori and Beth didn't notice. They just laughed as they chatted on and on. After all, they had a lot of catching up to do. Somehow forgiving and being forgiven had taken a big weight off of their shoulders and made the chilly autumn day seem much more warm and bright.

Ages 3-5
Q.
How did Lori feel when she saw that Beth was going on the same bus as she?
A. She felt sorry that they had gotten into a fight and wished they could make up and be friends again.

Ages 6-9
Q.
Should a person go out of his way to apologize and try to make up with others or is it good enough to wait for the other person to approach us first? Why?

A. It might seem easier to wait. After all, it's hard to apologize. But it's a mitzvah to reach out to patch up our relationships with others, and we'll be glad that we did. Usually, people will be happy to make up with us. It's really uncomfortable to remain in conflict with others. God wants us to be happy and live in harmony with the people around us. Reaching out and saying, "I'm sorry" helps make that happen.

Q. What are some different ways we can go about fixing up the bad feelings we have with others?

A. Of course, we can just directly apologize like Lori did in the story. But if we find that too difficult, there are other ways to get the job done. We can send the person a nice note or card saying we're sorry. We can pass the message on through a trusted friend. Sometimes, just a small gift to the person says more than a thousand words. The custom to make up before Yom Kippur is so effective, because it sets a time that everybody knows is for healing old wounds and that makes it more comfortable to ask each other for forgiveness.

Q. Is there anyone you know who is waiting for an apology from you?

Ages 10 and Up
Q.
Do you think one should apologize to someone else in a case where he still feels that he was right? Why or why not?
A. It may not seem that we should apologize, after all, the "other guy" was wrong. But we should realize that every conflict has two sides. Hardly ever does a situation exist when one party is 100 percent right and the other 100 percent wrong. Even in cases when we are 95 percent right, we still owe the other guy an apology. We will feel better about ourselves, when we do what we can to clean up "our side of the street." If the other person apologizes as well, that's great, but even if he or she doesn't, we have still done what we could to bring more peace into the world and into our lives.

Q. Is it really possible to "forgive and forget"? Is it wise?
A. People make mistakes; only God is perfect. Sometimes we are bound to be the "victims" of the mistakes of others. It is a high spiritual level to be forgiving. It is good to forgive others even if they don't ask us to, and certainly if they do. Of course, it's nearly impossible to literally forget what happened. But we can and should "forget," insofar as we no longer angrily view this person as the "guy who hurt me." We should take reasonable precautions to protect ourselves in the future, but our attitude needn't be one of bitterness toward anyone.

Q. Is there anyone you know who is waiting for an apology from you?