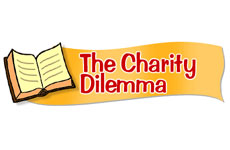 Judy has a tough decision to make. What would you do?

Judy was a responsible girl. She was also very smart. She did well in school and she especially loved her math lessons. Whenever she would be with her Mom or Dad at a store, she would calculate how much the items were going to cost before they got to the check-out counter. And if there was going to be change, she knew exactly how much it was suppose to be.

There was an expensive set of reading books that Judy wanted from the Jewish Bookstore. Her parents told her that since they recently bought her some books, she would need to buy this set with her own money. So she started a savings plan and slowly but surely the amount began to grow. It took her several months. She needed $35, no small amount for a young girl. From her allowance and baby-sitting jobs, she finally got up to $30.

Then on her way home from school one day, Judy found a five-dollar bill. There was no one around that seemed to have lost it. "Five dollars," Judy said. "Now I have enough to buy the set of books I've been saving for."

She was so happy that she decided to go to the Jewish Bookstore that very afternoon. When she walked in she went straight to the "Young Readers" aisle. She found the set she wanted, took it down and went to the cashier.

As she stood in line, she noticed a little tzeddakah box on the counter. On the box it said: DON'T FORGET! THE HIGH HOLIDAYS ARE COMING! HELP SUPPORT A NEEDY FAMILY -- WIDOW WITH 5 CHILDREN!

Conflicting thoughts started racing through her head. She wanted to help, but then again, what could her money do? Such a little amount from one young girl. What difference could it make? Besides, she needed all her money to purchase the books.

As she got a little closer, she thought about it again. "Maybe my money could help after all? Perhaps I don't have to buy the books today." Judy stepped out of the line and put the books back on the shelf. She pulled out her wallet, and took out $5. She folded up the bill, slipped it into the thin slot on the box and walked out of the store.

Judy felt good about what she did. She knew she would eventually save another $5 to buy the books. She could have been reading her new books already that afternoon, but instead her money was going to help a needy family.

Feeling on top of the world Judy walked into the house. "Hello everybody," she said.

"Hi Judy," her Mom said. "You got a letter in the mail today. It looks like it's from your Aunt Cindy from California.

Judy loved her Aunt Cindy more than any other Aunt. She had a special relationship with her ever since she was a little girl. Judy opened the envelope with excitement. There was a greeting card inside:

Dear Judy,
HAPPY ROSH HASHANA!
May you have a beautiful sweet year. Whenever I think of you I smile.
Enclosed you will find $10. Go buy yourself something special.
I love you,
Aunt Cindy

Q. Judy had a tough decision to make. To buy the books for herself or to give it the money away. Do you think she would have acted differently if she hadn't found the last $5, but rather earned it like the rest of her money?

Q. How do you think Judy felt when she opened the envelope from her aunt and saw the $10?
A. That she didn't lose by giving away her $5 to the poor. On the contrary, perhaps it strengthened her belief that God rewards us for doing good deeds.

Q. Can you relate to Judy's feelings of accomplishment for doing what she did? Can you recall a time when you felt like that?