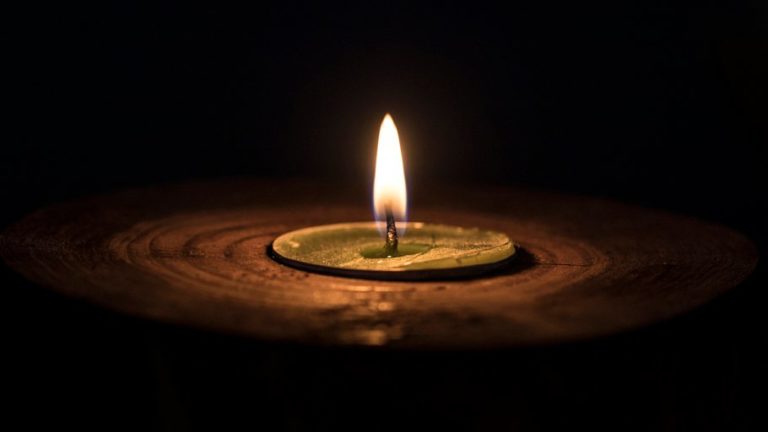 For a little while, we forgot the straw, the supervisors and the prison.

Gina Frankel was born in Lodz to a close-knit religious family. She was 12 when the war broke out in Poland in 1939.  She and her family endured terror and starvation. Her father died in the Lodz Ghetto. Gina, her mother and sisters were transported to Auschwitz where her mother and sisters were murdered. Gina and her surviving sister were then transported to several other concentration camps.

The following excerpt from Gina’s manuscript takes place in 1944 in Bergen Belsen, during the High Holy Days when Gina was 17.

On the day of Rosh Hashanah we sat together in the straw, trying to make a joint effort to create some semblance of the traditional services. Besides our other handicaps, we had to pray as inconspicuously as possible in order to hide our crime from the eyes of the supervisors. Of course we had no prayer books to refer to, but like a silent miracle as we looked into one another’s eyes, the old words flooded back to us.

As I prayed, memories of past services and the spirit of communion that existed then washed over me. The others must have had similar thoughts, for as we prayed our spirits soared to a higher peak than they had reached for longer than I care to remember. I had a feeling of nostalgia and religious ecstasy combined. Someone began to sing softly, and soon others of us joined in. As we sang an atmosphere of holiness and Godliness enveloped us all, and there was created in our souls a response from the very bottom of our existence. Our voices, though low, were strained with a prayer that cried to release us from the iron obstructions that gripped us, to try to find a way to freedom, perhaps even to reunite with our families. Most of all we prayed for a release from the everlasting torment of hunger.

Nothing was changed externally. But inside, our hearts were filled with a warm confidence that our prayers were heard.

When the prayers were ended at last, nothing was changed externally. We still sat huddled in the straw, and our bellies were still gripped by the powerful claws of hunger. But inside, our hearts were filled with a warm confidence that our prayers were heard, that our fervent please would be accepted by our glorious God.

I felt an utter exhaustion beginning to overtake me, and suddenly I was seized by the impossible desire to be alone with myself. I law down upon the dirty straw and pulled my blanket around me, trying to create an illusion in my mind of physical isolation. I closed my eyes and saw as clearly as yesterday the image of our home as it was on the day of Rosh Hashanah. I couldn’t cry, but I felt a lump growing and hardening in my throat, and the tears wanting to be shed but unable to let themselves loose.

After that the days progressed quietly and monotonously as usual, until the advent of Yom Kippur. This was the holy day of atonement and of twenty-four hour fast. Though it seemed almost a joke to fast any more completely than we already were, each of us attempted to observe the traditional services as well as our memories would let us. On the eve of Yom Kippur, a candle glowed softly in the middle our tent. We planned to perform the Kol Nidre service. Someone had found the old candle somewhere in the tent, and had carefully preserved it until such an occasion as this should arise. It was an old tin can in its honored position in the center of the tent. We all sat in the straw in our accustomed positions.

The prayers became a muted cry, an expression of tortured souls in hell.

We took the greatest precautions to conduct our meeting secretly, and to avoid the attention of the guards. The light flickering softly in the darkness, the light of the lone candle, impressed us profoundly. We remained in absolute silence and nothing moved. We could have been pieces of cracked statuary casting strange wavering shadows in the dim light. Songs began to swell from different parts of the tent, and some began to chant the prayers they remembered, the prayers of the evening service. The strain that encompassed us became almost unbearable.

Our hearts responded with such feeling that the prayers became a muted cry, an expression of tortured souls in hell, and we all sensed that there was such great might in our feelings that there would certainly be a breakthrough in the heavy strong gate that must be opened for our prayers to be heard. The Kol Nidre service lasted as long as the candle burned. When at last the flame shuddered and died, we all assumed our positions for sleep without an added word.

The next day at six o’clock, we were awakened for the regular morning checkup and the coffee. We did not to attract attention to our fasting, so we took the coffee and bread as usual. Later we soaked the ground with the coffee and cached the bread. We would dig it out later to be eaten when the fast ended.

At the first opportunity after they had checked us, we gathered again on the straw, sitting as close to each other as we could. There was a great mixture of feelings provoked by the knowledge of what the holy day of Yom Kippur meant to us. Through our keeping of the prayers there pervaded the emptiness of what we had experienced, the longing for our missing families, and the sharp feeling of repugnance that resulted from the ugliness around us. Our environment could never become anything except the imprisonment of patched and dirty canvas walls and damp straw beneath us. We sat there like poor sheep whose shepherd had been swished away by a horrible fate.

Never, I am sure, had the Yizkor service been held with more warmth of heart than it was that day.

We girls who prayed in the tent had been educated to read and understand the Yom Kippur prayers in the book. Now we felt deeply the misfortune that was caused by our not being able to obtain even one precious copy of the prayer book. Without it we could not possibly carry on the services properly, and we could not help feeling more bitterness because of it. As the time for the Yizkor service approached later in the morning, we felt even more lost and desperate without a prayer book.

One of the girls at this point began to sing in a soft lilting voice. I found myself listening with a certain tingling of the spine to her melodious tones. As if a signal had been given, all of us joined her and together we sang the “Yiddusheh Mameh.” Never, I am sure, had the Yizkor service been held with more warmth of heart than it was that day. We were sure that the God of Israel saw our feelings and felt their depth, and accepted this makeshift Yizkor. We felt a visible reward in the form of a wonderful warmth which overflowed our hearts. For a little while, we forgot the tent and the straw and the supervisors and the prison. But soon, all too soon, the glow became another memory and the days melted once more into uninterrupted lethargy.

When Everything Went Up in Smoke
Megillah Gorilla Saves the Day
Challah Reuben “Grinder”
Big OnThe Little Things
Comments
MOST POPULAR IN Holocaust Studies
Our privacy policy
Aish.com Is Looking for Great Writers