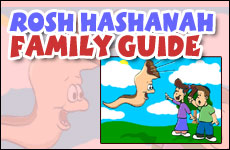 "Yeah," said Dina. "Do you see what I see? Faster than a speeding bullet ... more powerful than a locomotive ... able to leap tall buildings in a single bound ..."

"NO. It's Shrilly the Shofar!" said the Shofar as it landed right in front of them. "I'm ready to take you on a tour to learn all about Rosh Hashanah, my favorite holiday!

"Let's begin with the name of the day. The first two days of the month Tishrei are called Rosh Hashanah."

Actually, there are a few names for this holiday.

"That reminds me of a tongue twister," said Danny. "Frisch had a delicious dish of k'nish with a Rosh Hashanah fish."

It is said that the Jewish People are the People of the Book. Well, it's worth noting that one of the most important books of our people (after the Torah, of course) is the Siddur. The Siddur is the Jewish Prayer book that contains all of the prayers throughout the entire year. But for the holidays there is a special prayer book. It's called a machzor. This special book has all the extra things that are said during these days.

During the joyful Rosh Hashanah meal, we eat symbolic foods that represent good things we would want for the new year. We dip the challah bread and a piece of apple into honey (which is very sweet) and then say, "May it be Your will, God, that You renew for us a good and a sweet year." Some eat a little piece of the head of a fish and say, "May it be Your will, God, that we be as the head and not as the tail." There are different customs as to other foods that are eaten. Some people even have fun coming up with original symbols (even in English) such as eating raisins and then saying, "May it be God's will that I have a raise-in my salary this year!" Use your imagination.

When a nation crowns a king or queen, one of the parts of the ceremony is the trumpets and other instruments that are sounded. Similarly, every Rosh Hashanah we re-acknowledge that the Creator of the world is our King by blowing the shofar.

The shofar is actually a ram's horn. This is in remembrance of the ram in the story of Abraham and Isaac and the sacrifice.

The 3 basic sounds of the Shofar are:

The shofar is blown on both days of Rosh Hashanah. If one of the two days falls out on Shabbat like this year, then the shofar is not blown on Shabbat.

On the first afternoon of Rosh Hashanah it is customary to go to a body of water such as the sea, to say the Tashlich prayer. It symbolizes our hope that God will discard our sins and cast them away to the depths of the sea. To illustrate this, we do the pocket shake. We shake our pockets and clothing as if we're throwing our sins into the water.

When the first day of Rosh Hashanah falls out on Shabbat, then this prayer is postponed until the second day.

Danny and Dina learned much about Rosh Hashanah.

"Shrilly," said Dina, "you're the best tour guide we've ever had. Thank you again."

"Don't mention it," said Shrilly. "When you're ready to go on to Yom Kippur, just give me a tooooooot and we'll be on our way."

The Two Voices: A New Perspective on the Meaning of Teshuvah

Rosh Hashanah Rock Anthem
It Takes A Lot Of Faith To Be An Atheist
How Instagram Brought Back This Nostalgic Soup
What Makes Eli Run?
Comments
MOST POPULAR IN The High Holidays
Our privacy policy