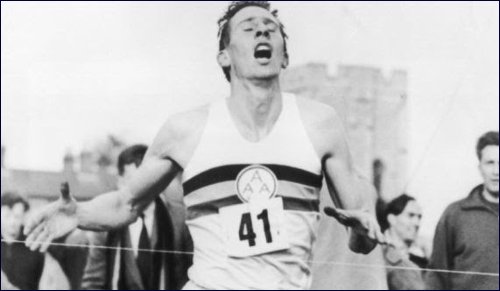 What achievement do you wish you could accomplish but consider physically impossible?

Roger Bannister, who passed away this past Saturday at the age of 88, died with a lengthy list of achievements.

In the sporting world he will always be remembered as the man who on May 6, 1954 broke the 4-minute mile – a test of speed and endurance that still stands as one of the defining sporting achievements of the 20th century. Remarkably, though, in spite of subsequently being chosen Sports Illustrated’s first Sportsman of the Year, Bannister retired from competition and devoted the rest of his life to pursuing a full-time career in neurology.

Perfecting his physical abilities was not enough for him. As he put it, “I had always wanted to become a neurologist, which is one of the most demanding vocations in medicine. Where do you stop with the brain? How does it function? What are its limits? The work seems unending.”

That, it seems, was the same quest which motivated him to achieve what no one else had ever accomplished before him. A four-minute mile for a runner was, for the longest time, considered a physical impossibility. The human body, it was commonly agreed, just wasn’t capable of achieving that level of speed. We are limited by the boundaries set by our physical abilities.

In Bannister’s memoir, The First Four Minutes, he remembers thinking, “Even then people were talking about whether it would ever be possible for someone to run a mile in 4 minutes. ... There was no logic in my mind that if you can run a mile in 4:1.25, you can't run it in 3:59. ... I knew enough medicine and physiology to know it wasn't a physical barrier, but I think it had become a psychological barrier."

The future neurologist, even before he entered medical school, understood the extraordinary linkage between mind and body. The limitations we blame on our bodies all too often find their source in our brains. The reason we can’t is because we believe it is impossible; once our minds are given permission to rule over our bodies, we turn the “can’t” into the “can”, the undoable into the done.

Bannister's explained why his achievement was so important to him as he approached the 50th anniversary of the feat: “It became a symbol of attempting a challenge in the physical world of something hitherto thought impossible. I’d like to see it as a metaphor not only for sport, but for life and seeking challenges.”

What happened shortly after Bannister “achieved the impossible” proved that he had been correct all along in identifying the real barrier that had prevented breaking the record before then. Once the four-minute mile was achieved, a feat until then firmly considered impossible, it was repeated by others. On June 21, 1954, just a few short weeks after Bannister’s “miraculous” run, John Landy did even better, lowering the world record to three minutes and fifty-eight seconds. Then on August 7, in a historic race which earned the title “mile of the century”, Landy and Bannister both broke four minutes, with Bannister winning the race at 3:58.8.

What suddenly happened to alter the ability of runners to break through the four-minute wall of resistance?

Bannister had put his finger squarely on the answer. The problem was a a psychological barrier, not a physical one. As long as it was mentally undoable it remained physically un-attemptable.

As Yoda said, “Do. Or do not. There is no try.” Try is self-doubt. Do is committing to a task, to a goal, to an outcome we believe in.

Once Bannister broke the psychological barrier he no longer felt the urge to compete. He had accomplished his goal. He channeled all of his efforts into medicine. Here too he excelled. As chairman of the Sports Council between 1971 and 1974, he developed the first test for anabolic steroids. For his contributions he was knighted by the Queen. When asked what gave him his greatest sense of fulfillment he said simply, “None of my athletics was the greatest achievement. My medical work has been my achievement and my family with 14 grandchildren. Those are real achievements.”

Bannister demonstrated that it is our mind rather than our body which most often prevents us from achieving true greatness.

We all have imaginary walls of resistance, four-minute mile mental limits, which we set for ourselves. They can take many forms: I can't possibly observe all the laws of the Torah, keep the Sabbath, silence my anger and forgive people who hurt me. The list is endless. The impediments to success seem to be physically impossible to overcome. The truth is that here too it is a psychological barrier which serves as the true culprit.

In a totally different realm, it was Theodore Hertzl who proclaimed, “If you will it, it is no dream.” And the state of Israel was born.

Roger Bannister said it with regard to a four-minute mile. Think about it: What is your four-minute mile? What is the achievement you wish you could accomplish in life but consider physically impossible? And ask yourself: are you mistaking a psychological barrier for a physical obstacle?

You might be able to run your personal four-minute mile after all.