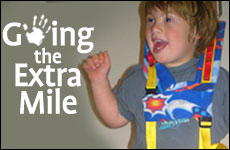 Sometimes you don't know how far you can go until you're pushed to get there.

When my son Yehuda was born with Down syndrome, I knew my life was about to undergo a change, but somehow I never imagined anything like this. Here I was, three years later, sitting in a neurological development center for children, with my wonderful little boy who was walking, running down ramps, climbing up slides, saying about 1,000 words, a bunch of short sentences, following three-step requests easily and understanding everything. Pretty good, right?

But all I was getting was a disapproving shake of the head from Matthew, the center's director.

"Sure, he's a cute little guy and he's doing nicely, but he could be doing so much better. You need to push him beyond his comfort level." 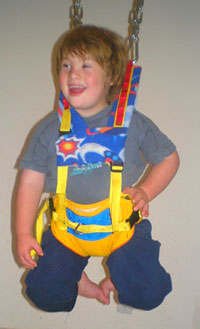 He was referring specifically to a part of their very intensive developmental program called the anti-gravity device. It's a harness, connected to bungee-like rubber ropes hanging from the ceiling, within which a child is placed and swung, flipped, cart-wheeled, rotated and pirouetted in all directions for various amounts of time and in varying degrees of intensity. Apparently, astronauts undergo a similar training program before heading into space, where they learn to overcome the natural nauseous feeling that hits when in a non-gravity environment, enabling them to control their movements in space with greater efficiency.

My son isn't planning to be an astronaut (just yet), but he was being put through this swinging "training" in order to develop vestibular function: coordination and balance and the ability to eventually defy gravity by will, i.e. jumping, hopping, skipping, running for long distances. He loved this particular part of the brain-development program -- squealing in delight and laughing and singing as he flew and flipped and somersaulted in all directions. I proudly recounted to Matthew how obviously well our son was doing (and we, in executing these jumping shenanigans) and this is when I received the aforementioned frown.

"You need to up the ante to the point where he's a little uncomfortable and apprehensive."

"He shouldn't be laughing and enjoying himself while being flung about like that," he started to explain. "Think about it. You and I would be throwing up after three minutes of those acrobatics. The fact that he's enjoying it means his brain isn't getting it. His cerebellum is not yet growing and developing enough to reach the kind of coordination and balance he's going to need to function normally. You need to intensify the swinging, up the ante to the point where he's a little uncomfortable and apprehensive. That would be a good sign."

I don't know much about brain development, but as a parent trying to maximize her child's potential, it made sense. Just as your muscles don't develop if you don't work up a sweat, lift weights and push yourself, a child's brain needs to be pushed beyond its comfort level in order to create new circuits and neuro-connections.

Complacency is the enemy of spiritual growth. To the extent you strive to go against your instinctual response and make the more difficult choices, you develop new spiritual capacities, create new soul-circuits. If you just coast along through life, laughing and squealing in delight, you don't build up your spiritual muscles.

I called Matthew a few weeks later to inform him that Yehuda was now quite unhappy with the intensified version of the swinging routine, whimpering and complaining as soon as we hooked him up. Should we stop or slow it down again?

"Stop? No! That's wonderful news!" he said. "Keep the swinging at that level -- that's perfect. Yehuda is now growing those new vestibular connections in his brain. You guys are doing a great job. And you know what," he added, as if to impart a wonderful secret, "the more effort you put in, the more Yehuda will develop and function as a regular kid. There's nothing stopping him. It's all up to you."

It's all up to you... Forget the pat on the back or the permission to slow down a bit. Matthew was raising the bar higher. He wasn't only breaking Yehuda's comfort barrier, he was pushing me and my husband to go beyond our own self-imposed limitations.

In this rigorous, all-encompassing program that we have undertaken in order to proactively develop our child's brain, we've had to stretch and flex not only our physical muscles, but our spiritual muscles as well. Along with a fair share of patience I know I did not have previously, I've been forced to develop a greater sense of humility in realizing that I cannot control or accomplish anything myself -- only the Almighty brings about results. I have learned to appreciate more than ever the power of prayer. I have come to realize that my grandiose dreams of changing the world on a public scale are not nearly as important as working to help my little boy -- unobtrusively and privately -- as well as my other children, to actualize their potential.

The last couple of years may not have been comfortable, but I have often felt a sense of true satisfaction and exhilaration that comes with doing something important and meaningful. It's as if the effort itself was generating the energy necessary to continue, kind of like the rush you get after an hour at the gym.

Could the soul produce endorphins? 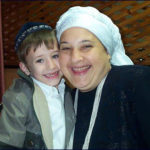 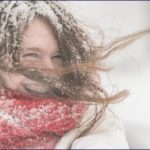 In the Waiting Room7 min read 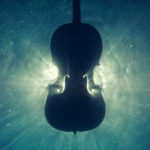 Why You Should Stop Comparing Yourself to Others1 min read