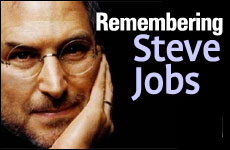 Jobs' wanted to better mankind with his gift. This spirit of creativity is central to Judaism.

News of the death of Apple’s founder and CEO, Steve Jobs, this morning spread across the Internet just as quickly as reviews of the brand new iPhone 4S. The man, who President Barack Obama called “among the greatest of American innovators - brave enough to think differently, bold enough to believe he could change the world, and talented enough to do it,” was loved by the world.

I found myself saddened upon learning of his passing. It’s not just because of my addiction to my MacBook, iPhone and iPad – some of the revolutionary technology he designed in recent years. Jobs was inspiring. He possessed a passion, a drive, and a vision that is so rare to find today. And he inspired me in my life, as a rabbi.

In the early 1980’s, when I was still a toddler, Steve Jobs was revolutionizing the world with the Macintosh, one of the first commercially successful personal computers. With its design, size, easy to use graphical interface, and mouse, it changed the way we compute. Jobs had conquered the world.

But success was short lived. In 1985, Jobs was fired from Apple. He would later say that, “the heaviness of being successful was replaced by the lightness of being a beginner again, less sure about everything. It freed me to enter one of the most creative periods of my life.” And it was precisely that resilience that allowed Jobs to get up, dust himself off, and start all over again. When he returned to Apple in 1996, he would resuscitate the company and introduce a series of products that would once again change the way we think about technology. The world was conquered, again.

We are charged with the responsibility of finding what is lacking in the world and contributing to perfect it.

Of all his accomplishments, I think Jobs’ will be remembered most for his creative genius. He was our generation’s Edison. He possessed a need to innovate, and share those innovations with the world. He wanted to better mankind with his gift. This spirit of creativity is central to Judaism. We are charged with the responsibility of finding what is lacking in the world and contributing to perfect it. Rabbi Joseph B. Soloveitchik wrote: “The peak of religious ethical perfection to which Judaism aspires is man as creator.”

When we create, we emulate our Creator and, according to Rabbi Soloveitchik,

become a partner with the Almighty in the continuation and perfection of His Creation. Just as the Almighty constantly refined and improved the realm of existence during the six days of creation, so must man complete that creation and transform the domain of chaos and void into a perfect and beautiful reality.

In giving us new ways to communicate, to share, and to think, Steve Jobs created a “beautiful reality.”

Jobs’ death comes during the Ten Days of Repentance, a time when the Jewish People engages in deep reflection and introspection. As individuals, we consider our mission in life and how to actualize our unique potential. We take a good look at who we are and who we can become. The life and legacy of Steve Jobs teaches us just what man can achieve.

Rabbi Shimshon Nadel lives in Jerusalem where he heads Yeshivat Torat HaAretz, the Har Nof Community Kollel. Before moving to Israel, he served as a Synagogue Rabbi in Nebraska and Connecticut. His forthcoming book is Return Again: The Argument for Aliyah.

The Many Faces of Addiction
The Blue Beyond
Great Place to Live
Is Eating Supposed To Be Spiritual?
Comments
MOST POPULAR IN Current Issues
Our privacy policy