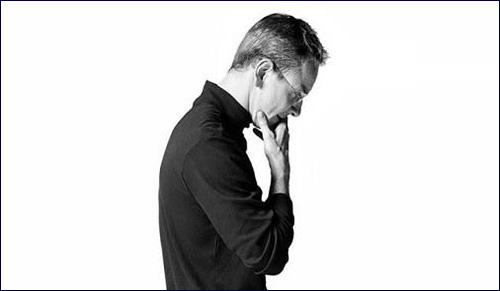 Steve Jobs may have been a corporate titan, but many honorable character traits, cherished by Judaism, were foreign to him.

“You can be decent and gifted at the same time.”

“You keep alienating people for no reason.”

“You can be decent and gifted at the same time.”

These challenges are all thrown at Steve Jobs during the movie just released about the legend who co-founded Apple and who changed the face of personal computing. Steve Jobs, directed by Danny Boyle (127 Hours, Slumdog Millionaire) and based on a script by Aaron Sorkin (The Social Network, Moneyball, The West Wing), is fast-paced and riveting, with outstanding performances by every actor on screen.

Based in part on Walter Isaacson's authorized biography of Jobs, the movie opens at a pivotal moment in 1984. In just a half-hour, Jobs is set to introduce the first Macintosh personal computer to the world. Thousands of people are filing into the large hall, eager to watch history being made. The computer is expected to wow the crowd by actually saying “Hello,” (remember this was 1984), yet the engineer tells Jobs the voice feature is malfunctioning.

“Just fix it,” snaps Jobs, played brilliantly by Michael Fassbender. Despite the engineer’s protests that the computer has been overbuilt and keeps crashing, that Jobs himself ensured it was designed in a “closed system” and that even the engineer himself hadn’t been given the tools to open the back of the machine, Jobs remains coldly implacable. He demands the computer say “hello” when he goes on stage to unveil it. Or else.

This is the Steve Jobs – passionate and visionary about the future of personal computing, yet also hard, unforgiving, arrogant, controlling, egotistical and driven – presented in this film. Remarkably, he rose to phenomenal wealth and fame in an industry in which he had limited technical skills. He was not a computer designer, nor a computer engineer, not even a coder. But he had the vision of how personal computing could transform the lives of the average person, opening a world of creativity on many levels. His vision often outstripped the technical abilities of the time, though, which in the movie is a source of frustration to him.

He also envisioned and helped create other ubiquitous accoutrements of modern life: iPods, iPhones, notebook computers. But his view of computing democracy had limits. His insistence that Apple computers have “closed systems” with few if any expansion ports severely limited users’ ability to add, upgrade or swap components. Only Steve Jobs held on to the keys to the computer castles.

The film’s action is limited to about a decade in his early career, and focuses on Jobs’ relationships with a handful of people: his loyal marketing manager, Joanna Hoffman (Kate Winslet); Steve Wozniak (Seth Rogan), with whom Jobs created Apple in a garage in Cupertino, California in the late 1970s; John Sculley (Jeff Daniels), the CEO Jobs hired away from Pepsi to lead Apple; and Lisa, Jobs’ daughter by a longtime girlfriend. For years Jobs fought the claim of paternity, only beginning to pay child support upon a court order. Lisa is played by three actresses, each excellent, as her character grows up.

The dramatic arcs of the movie focus on the stakes involved with certain defining steps in Jobs’ career. But the most intense drama is not about whether the next product will succeed or fail in the market. It’s about how each of these people close to him try to prod him to be a better man. Joanna urges him to keep his ego in check, to be a more involved father and a more responsible corporate leader.

Wozniak shows up in several key scenes, asking Jobs to finally and publicly recognize the work that he and other senior team members had contributed in creating the Apple II, which he and Jobs had first introduced in 1977 and was one of the first highly successful mass-produced microcomputer products.

John Sculley tries to help him make peace with the underlying resentment he harbors over the fact that his first set of adoptive parents returned him to his birth mother after one month. Though Jobs was soon after adopted by parents who raised him to adulthood, the feeling of rejection stings and lingers.

Finally, Lisa wants him to love her just a little, maybe almost as much as he loves his work. As Lisa grows older, she also challenges him to display more compassion to her mother, who is portrayed in the film as somewhat unstable.

Jobs was, by all accounts, ferociously dedicated to commercial success so much that it did exact a heavy toll on his relationships. In each scene where he is called to rise above his ego and professional drive, I was rooting for him, saying, “Come on, you can do it!” But only at the end does the movie suggest a more balanced way of setting priorities.

It takes tremendous grit and drive to achieve the kind of massive commercial success Steve Jobs enjoyed. Corporate titans are rarely known as “Mr. Nice Guy.” The movie has been criticized by some who knew him well and over many years as focusing only on his early years, when he was still immature. It does not give him credit for having grown as a person, for having learned to be better listener, more of a team player, kinder. It does also not touch upon the time in his life when he married and had more children, to whom he was intensely devoted.

Watching the movie from a Jewish perspective, I was struck by how radically different Judaism defines success and the values we honor versus in secular culture, where too often, commercial success alone is revered. The early Steve Jobs presented in the film is a man who failed utterly to display the character traits cherished most by Judaism. He could not demonstrate gratitude (hakarat hatov), avoided personal responsibility (when it came to his daughter at least), generosity, or humility.

I couldn’t help but think that in Judaism, our “greatest of the great” are people of the utmost humility. Rabbi Moshe Feinstein, almost universally recognized as the greatest Torah scholar of the 20th Century, wrote in his introduction to his most famous work, Igrot Moshe (Letters of Moshe), that he was torn as to whether he had sufficient knowledge to have written the book in the first place. And as we learn in Pirkei Avot (Ethics of the Fathers 4:28), jealously, desire and the quest for glory are traits that “take you out of this world.” The drive for these things can never be satisfied, and can make a person anti-social and perpetually dissatisfied.

Apple’s co-founder has left a complicated legacy. He helped revolutionize not only the personal computer industry but also movie animation, music, phones, tablet computing and digital publishing. These commercial achievements have earned him iconic status among millions. And I personally benefit from his creations as well and use them daily.

But Jobs also worked strategically to convince us all that we would “need” the latest upgrades to our i-universe, even when our current devices are still spectacularly sophisticated. As I sometimes have to sort through the tangle of cords and chargers for our family’s many versions of the iPhone, iPad, and MacBooks, I resent the fact that Jobs’ obsession with control ensured zero compatibility even among products that are close cousins.

Fortunately, Shabbat ensures that I am offline for at least 25 hours a week. Despite all the fantastic stunts my phone and computer can perform in large measure to Steve Jobs, on Shabbat I find I am more and more dazzled by the quiet.

The Jazz Singer, Yom Kippur & the History of Film

Sidney Poitier and the Jewish Waiter who Taught Him How to Read
Why My Iranian Mother Didn’t Want Me to Become a Religious Fanatic
The Jewish History of Prague
Why the Sexual Revolution was Bad for Women
Comments
MOST POPULAR IN Jewlarious
Our privacy policy
Aish.com Is Looking for Great Writers