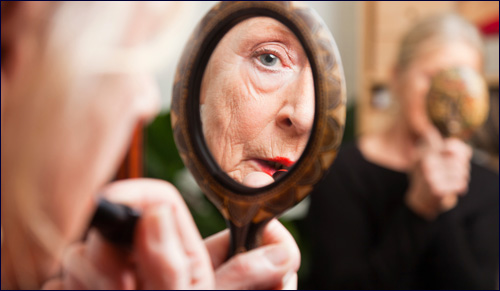 Sage words from my grandmother, a Holocaust survivor.

In 1996, a few years after the democratization of Czechoslovakia, my grandmother walked into a Jewish Agency in Manhattan to apply for restitution from the German government for her financial losses during WWII.

Though fluent in many languages, her English was limited, so my mother accompanied her as her advocate.

For hours, they were subjected to demoralizing, suspicion-filled questions in which they relived the horrors my grandmother had endured. She needed to prove her Jewish identity, though she had changed her name after the war. She needed to verify her whereabouts during the Holocaust, though all papers had been burned. She had to prove, somehow, that she had in fact been persecuted, though she spent many years in hiding.

Halfway through this procedure the interviewer left the office to confer with his superior. My mother, raised in the ruins of the Holocaust and herself a refugee of the Warsaw Pact Invasion, was drained, emotionally and physically. Slumped in her chair, pale and teary eyed, she watched in wonder as my grandmother made her way to a mirror on the wall to fix her hair, straighten her blouse, reapply makeup.

When she was satisfied, my grandmother turned to my mother, saw her drawn and ashen face, and said, quite plainly, “Put on some lipstick. Look alive.”

As a Holocaust survivor, she understood that if you are blessed enough to be alive, then be alive.

This simple, yet enigmatic, advice has echoed in my head during hard times. After September 11th, wallowing in my stupor and shock, I could hear those words, “Put on some lipstick. Look alive.”

In 2012, after the shooting of grade school children in Sandy Hook, just a few towns away from where my own children attend school, I could hear my grandmother's words, “Put on some lipstick. Look alive.”

My grandmother was not suggesting we present one face to the world while preserving another to show in private. Nor was she suggesting that superficial fixes act as balm for deep wounds. Rather, as a Holocaust survivor, she understood that if you are blessed enough to be alive, then be alive. And though painful times are the ones in which we are most tempted to wallow in sorrow, they are in fact the times we need to stand up straight and remember our value.

Her experiences during the Holocaust greatly tested her faith. When I finally came to know her, she was no longer a practicing Jew. However, the few times she would invoke her faith in God were when talking about the Holocaust itself.

“Jaj!” she would exclaim in Hungarian, wiping tears from her pale blue eyes. “God gave me the strength to survive it once. I could never do it again.” 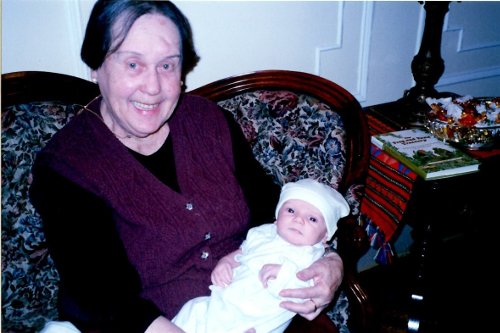 My grandmother pictured with her first great-grandchild

The Holocaust was the very thing which had dampened her faith and it was simultaneously the time during her life in which her faith was the strongest. Because the strength she spoke of was a strength of faith. Faith in God's mercy and justice. Faith that forgiveness and kindness prevail. Faith that while we cannot always see the purpose of our pain, there is a bigger picture, and God, Infinitely Wise and Merciful, has an infinitely wise and merciful plan.

God breathed life into us. And in so doing, His purpose, became our purpose.

There are many times in my life when I have looked at the actions of a person or institution, and felt personally devalued. But this is because I had forgotten, in those times, to look past the appearance of value to the true intrinsic value God placed in all of us.

My mother was born in June of 1946. She was conceived three months after the liberation of the camps. After all they had seen, all they had lost, all they had suffered, my grandmother and grandfather had so much faith in God – and humanity – that a mere three months later, they decided to bring a new life into this world. Because of their faith, my mother is here. And I am here and my children are here.

So when I experience personal moments of pain, or witness painful events endured by others, I think, “Put on some lipstick. Look alive.” These words of a Holocaust survivor were never about vanity. They were about value.

I draw guidance from my grandmother's life. And I remember that it is precisely the moments when we feel our faith most shaken, that our faith is, in fact, most strengthened.