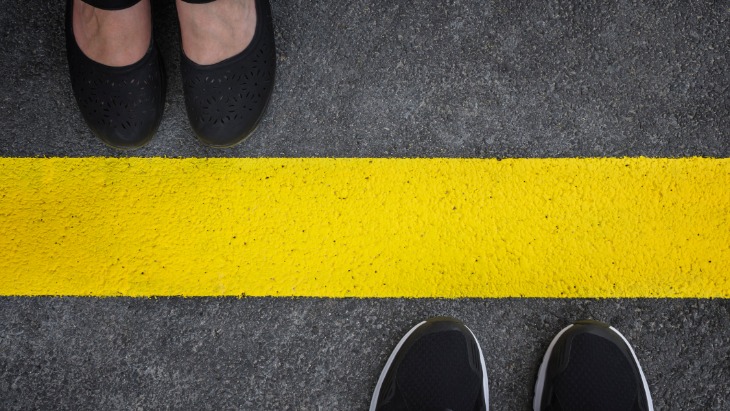 These two former Israelis have formed an improbable partnership to tackle the worrying threat of assimilation.

It is Friday afternoon in Hollywood, Florida. Dr. Neta Peleg-Oren, a non-religious psychotherapist, and Yehuda Kornfeld, an ultra-Orthodox rabbi and educator, are sitting opposite me. Both are former Israelis and they are worried.

“This Won’t Happen to Me” is the name of the workshop they conduct together and it is also the title of their soon-to-be published book. “This won’t happen to me” is the sentence that almost every Israeli parent in America utters regarding the assimilation and intermarriage of his/her children, but it happens. There are more than half a million Israeli-Americans and a significant majority of their children marry non-Jews.

“I never thought about my children intermarrying until I arrived here to do a post-doctorate,” says Neta. “My three children are still unmarried and I am apprehensive about this.” 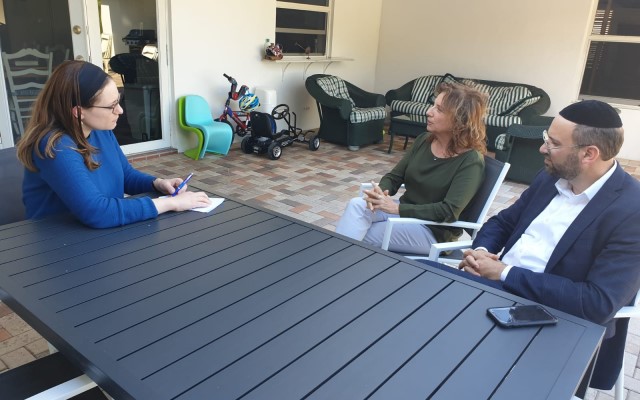 Neta’s mother is originally from Kibbutz Yagur, not far from Haifa, and Neta, a sabra native Israel, grew up in nearby Kiryat Tiv’on. When she met Orthodox Rabbi Yehuda Kornfeld, who was raised in Israel by Hareidi parents, the two found common grounds for concern.

“We sat together for half a year and constructed a workshop for the worried Israeli parent,” Neta explains. “I met very few Israelis who said ‘I don’t care’ about this matter, and we are not concerned with addressing them. The vast majority of Israelis here want Jewish continuity in their families, but they have absolutely no idea how to achieve it.”

Neta first became aware of Israeli assimilation distress in her psychotherapy clinic. “I received the following phone call: ‘Don’t ask what just happened. We have to come in and talk.’ The frightened couple came in and had great difficulty believing that their son had brought home a non-Jewish girlfriend. As for the son? He did not have the slightest idea that this was even a problem. He did not want to cause his parents pain but he had no idea that this was important to them. He said, ‘Mom and Dad, you sent me to a public elementary school and, one day a week, to a Jewish Sunday school. Today I’m 25. What did you expect?’”

Yehuda adds: “In one of our workshops, a couple said they told their daughter, who was marrying a non-Jew: ‘How could you do this to us? We did Kiddush every Friday night and ate matzah on Pesach.’ To which she responded: ‘I spoke with him and he has no problem drinking wine on Friday night or eating crackers one night of the year… Our traditions are pleasant, we can combine them with his, what’s the problem?’

It does not matter if you are secular or religious – you must pass along to your children the deeper meaning and love of being Jewish.

In other words, if you cannot convey the significance of your traditions internally and penetrate your children’s hearts, you have nothing. And it does not matter if you are secular or religious – you must pass along to your children the deeper meaning and love of being Jewish. I do not minimize the components of Israeli identity, of keeping up with news from Israel, of speaking Hebrew. This is important, but it’s not enough.”

Twelve workshops have already been conducted in Florida and one in Los Angeles, together with dozens of group meetings in people’s homes as the demand for these activities grows. At the same time, Yehuda has been involved in establishing the first school for Israeli children in Florida – The Jewish Academy. 200 children are already studying there in a pilot program that should be spread across the continent.

“From the standpoint of developmental psychology,” Neta says, “the two most important questions of adolescents are: ‘Who am I?’ and ‘To whom or to what do I belong?’ This is what the workshop is all about: Identity and belongingness. We don’t want parents to sit their children down and say: ‘Now we are going to talk about our identity.’ What good would that do? Parent needs to bring Jewish identity into the home on a daily basis without arousing opposition. Just as a Jewish mother drives her son crazy every day that he should go to college and become a doctor, so too Jewish identity needs to be promoted, drop by drop. Over the years, the necessary message will penetrate and be absorbed through repetition of simple sentences such as ‘You are a Jewish boy/girl’ and ‘We are proud to be Jews,’ and by asking questions such as ‘How is our Judaism expressed?’ In the workshop, we ask ‘What is your first Jewish memory?'”

“A lot of pain comes up in our workshops,” Yehuda continues. “Parents always say, ‘We are Israelis,’ but their children say, ‘That’s right, but we are not.’ This is the most difficult thing. Parents are torn up since this is the first time they realize that their child does not identify as Israeli. ‘My child is Israeli,’ they assert with confidence. And yet, he/she is not. But they hold on to this with all their strength with statements like ‘My child eats falafel and humus.’ It is not easy to break free from this illusion about their kids’ Israeliness and there are parents who are unable to do so. But many parents grasp for the first time that they really did leave Israel and that their children do not consider themselves Israeli. Their children are Jews with Israeli parents, and construction of their kids’ identity needs to begin from there.”

“At the same time,” Neta explains, “we need to assure the parents that we don’t mean to take their Israeliness away from them. They will stay Israeli but they need to consider their children. After all, the disaster would be their children’s rejection of Jewish identity and that is what we need to prevent. By the way, there is no insurance policy against assimilation. Even Rabbi Kornfeld is not completely insured. However, regardless of what happens, we will at least be able to stand in from of the mirror and say we tried our best, we did the maximum.”

“It is important to reach parents whose kids are still small,” Yehuda emphasizes. “But these parents frequently say, ‘Let’s talk later on.’ They don’t understand that they have to start early. If they don’t, they end up running to us when their kids are in college and no longer listening to every word their parents say. What do we tell them then? It’s too late?”

I asked them to conduct for me a condensed, accelerated workshop. Neta begins with the Bible: “We need to make them familiar with biblical stories so they feel that their family is a continuing chapter of those stories, that they are part of something magnificent. There is history and there are values associated with every holiday and children need to learn about them, too. Often, there is a family awakening at bar mitzvah time but then the fire goes out. Our task is to see that the enthusiasm around that awakening continues, that the fire keeps on burning.”

“In order to instill Jewish values,” Yehuda explains, “we need to say, ‘As a Jew, this is what I do.’ It’s not enough to say ‘I am a Jew,’ but what I do as a Jew is what’s important. For example, a child needs to understand the statement of our sages that ‘Each Jew is responsible for every other’ and therefore ‘We help other Jews.’ We need to weave such ideas into the fabric of daily living at home, with frequent hints, in order that our children will grow up with these ideas embedded in their hearts.”

“The message does not have to be verbal,” Neta adds. “It can also be conveyed through objects in the home. Is there a Bible at home and how do we relate to it? Is there a Hanukkah menorah? To have a Hanukkah menorah on display in the living room is a big deal. Something also needs to be done on Fridays. If you are in Israel, even if you are secular, there is a special feeling attached to the approaching Shabbat, but here it’s not like that. We suggest sending a ‘Shabbat shalom’ text message on Fridays to the entire family, to remind the children that Shabbat is coming, and it’s not like any other day of the week, regardless of the messages transmitted by the surrounding culture. The Friday night meal is also important. Most Israelis here do not have kids in Jewish schools, saying they cannot afford it, and therefore everything their kids learn about Judaism and Jewish practices takes place exclusively at home.”

I am astonished at their unity and working together. “Both of us received similar reactions from our base. ‘What are you doing together? How can you work with a secular Jewish woman or how can you work with an ultra-Orthodox man?’” Yehuda exclaims. “But we discovered that there is a large community that genuinely wants this combination.”

Neta closes with a comment that echoes in my head long after we part: “In Israel, Yehuda and I would probably never have spoken to each other but here, as two Israeli-Americans, we discovered that we have much in common and need to work together.”

A Hebrew version of this article appeared in Yedioth Aharonot. Translated by Yehoshua Siskin.

Sivan Rahav-Meir is a media personality and lecturer. Married to Yedidya, and mother of five, she lives in Jerusalem, and is currently with her family on shlichut, serving as the World Mizrachi Shlicha to North America, where she lectures in various communities. She works for Israel TV news, writes a column for Yediot Aharonot newspaper, and hosts a weekly radio show on Galei Zahal (Army Radio). Her lectures on the weekly Torah portion are attended by hundreds and the live broadcast attracts thousands more listeners throughout the world. Sivan lectures in Israel and overseas about the media, Judaism, Zionism and new media. She was voted by Globes newspaper as most popular female media personality in Israel and by the Jerusalem Post as one of the 50 most influential Jews in the world.

Survival of the Fittest

The Massacre of the Jews of Poland

Antisemitism: The Problem We All Live With
Evolution 2.0: The Coming Darwinian Revolution
Chukat 5782: Let’s Play the Blame Game!
The Sin of Moses: The Two Ways to Communicate
Comments
MOST POPULAR IN Israel
Our privacy policy