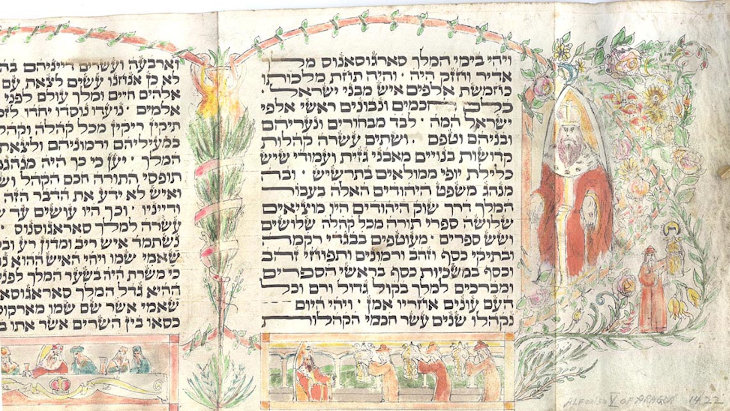 Jewish communities around the world that were saved from the brink of destruction.

The Jews of the Purim story celebrated their delivery from destruction by having a festive meal, giving food gifts to each other and reading a specially written scroll, Megillat Esther, to publicize the miracle. Over the years other Jewish communities who have experienced being saved from the brink of destruction have also established their own mini “Purim.”

Jewish law teaches “Whoever has had a miracle occur for them, all the more so the inhabitants of a city, can establish that day for themselves and those who come after them as a ’Purim’”. Indeed, Rabbi Avraham Danzig, the famed Lithuanian Rabbi of the 19th century included a footnote in his halachic work, Hayei Adam the story of his own ‘Purim’ miracle.

In 1804, a gunpowder magazine accidentally exploded in the heart of Vilna. 31 people were killed in the courtyard where Rabbi Danzig lived, his own house collapsed, with two walls and a roof beam caving in, yet none of his family lost their lives. Rabbi Danzig instituted his family’s own annual holiday on the 16th of Nissan corresponding to the date they were saved.

The Jews of Saragossa, Spain had a long held custom to greet a visiting king with a procession of Torah scrolls from all of the synagogues in the city. Over time, out of respect for the Torah, rabbis decided to remove the scrolls from their ornate boxes before they danced in the city’s streets.

In the year 1420, ahead of a visit by King Alfonso V of Aragon, a known instigator named Marcus, a convert from Judaism to Christianity, informed the King about the removal of the scrolls from their boxes, claiming it was intended as an insult to the king. The king was infuriated and Marcus urged him to order the Torah cases opened during the royal visit. 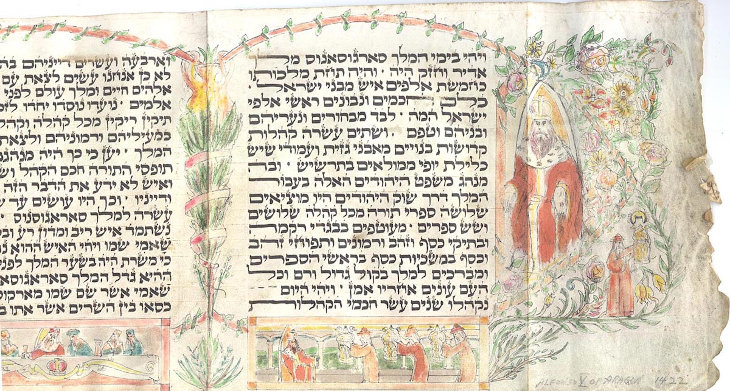 A Megillah (Scroll) of Saragossa was written detailing the story of how the Jews were saved.

The night before the visit one of the leaders of the community was informed about Marcus’ plot and the Torah scrolls were kept in their boxes. When the king arrived and ordered his guards to open the boxes, to his surprise the scrolls were there. Rather than punishing the Jews, the king’s anger was vented at Marcus who was put to death.

The 17th of the month of Shevat was decreed as ‘Purim Saragossa’, with festivities and a megillah (scroll) written preserving the story. Such was the feeling of redemption in Saragossa that even after the expulsion from Spain in 1492, the tradition of celebrating Purim Saragossa continued for generations in Constantinople, Magnesia, Smyrna, Salonica, and Jerusalem.

In 1616 the Jews of Frankfurt fell victim to an attack by the guilds of the city. Led by Vincent Fettmilch, later nicknamed Vinz, the ghetto Judengasse was ferociously attacked. Coining himself the “new Haman”, Fettmilch’s attacks resulted in the total expulsion of the Jews from Frankfurt with their property confiscated.

Several months later, the German emperor, infuriated by the attack on the Jews – which he considered as his property – ordered Fettmilch be executed for the injustice with his corpse hung on the gates of the city. Fettmilch's house was also razed, and an account of his crimes and punishment was engraved on a pillar in German and Latin at the site.

The first act of the Jews was to rebuild their synagogue which had been destroyed. A "Vincent Megillah" was composed in Hebrew and Yiddish by Frankfurt natives. Rabbi Moses Sofer (the Chasam Sofer, 1762–1839) was known to observe the Purim Vinz even after he had left the city. 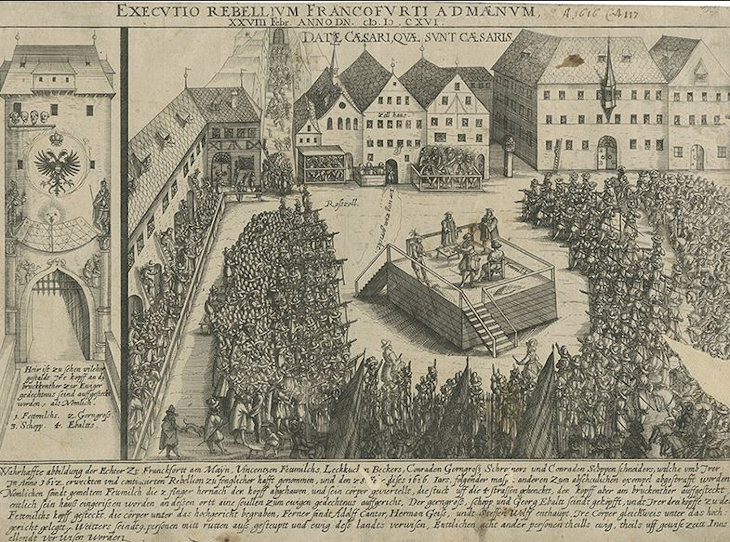 Depiction of the execution of Vincent Fettmilch in 1616

In 1731, David Brandeis, a grocery store owner in the town of Jungbunzlau, Bohemia, was thrown into prison along with his wife and son after the daughter of a Christian bookbinder bought a jar of plum jam from his store and fell ill. Her father, who also ate the jam, died shortly after and Brandeis and his wife were charged with poisoning Christians, and their store was shut down. 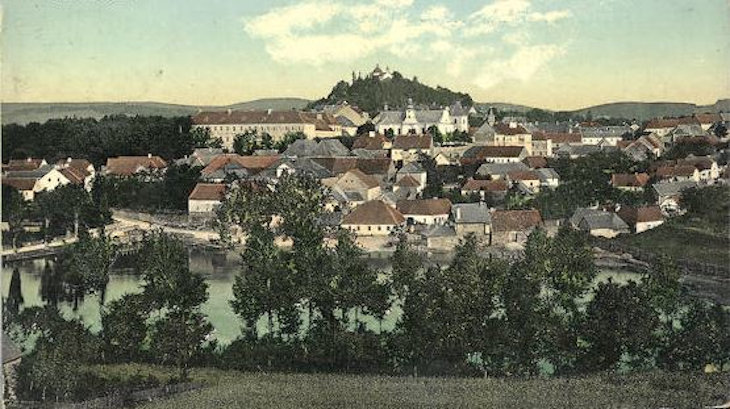 Jungbunzlau, Bohemia where David Brandeis and his family evaded certain death in 1731

After a careful investigation by the municipal authorities it was found that the bookbinder's death had been due to tuberculosis, not the plum jam. Brandeis was pardoned and recorded the event in a Hebrew scroll which he called “The Song of Ascents of David”, making it obligatory upon all his descendants to read this scroll every year on the 10th of Adar, and make it a day of rejoicing. The festival was observed by descendants of the Brandeis family well into the nineteenth century.

The Jewish community in Rhodes was successful in the trade of sponge which was used mainly for bathing products. Rhodes had the greatest sponge yield across the Mediterranean and was a lucrative business. In 1841, Greek competitors accused the Jews of Rhodes of murdering a Christian child who had gone missing. The libel was believed and the governor of Rhodes ordered the Jews to be jailed and tortured. The missing child was later discovered alive on the nearby island of Syra. 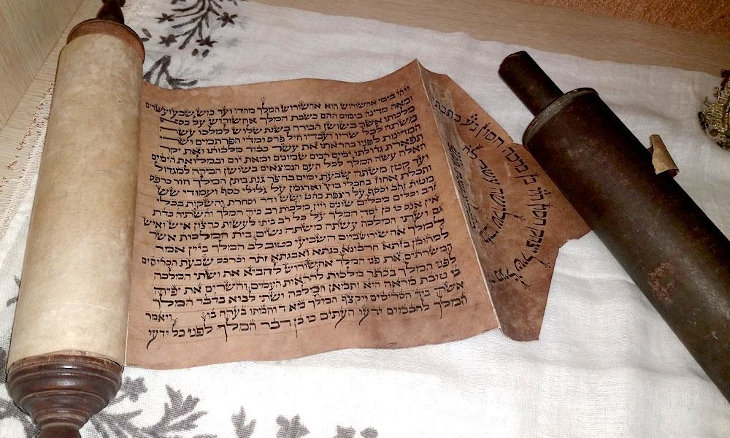 The Megillah of Esther from Rhodes, dated 1864, displayed at Rhodes Jewish Museum

The Ottoman Sultan, 'Abd al-Majid, was furious at the governor and issued a declaration that the accusations had been false. The date of this intervention coincided with the date of Purim itself, the 14th of Adar, and so the Jews of Rhodes celebrated a double holiday on that day. Special prayers were recited in addition to the usual Purim observances.

Purim Teaches Us How to Respond to Anti-Semitism
Big OnThe Little Things
Chraime Egg Boil
Is Grease the Word?
Comments