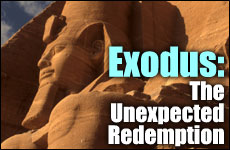 Why did God make the slavery worse before redeeming the Jewish people?

If we were to sum up the Exodus in a single word, many terms might come to mind – miraculous, spectacular, awe-inspiring.

One word which would not come to mind is "unexpected." That is because even before the Jewish people came into existence, God had forewarned Abraham “that your children will be strangers in a foreign land. They will enslave and afflict them for 400 years. And I will judge the nation that enslaves them; afterwards they will go out with much wealth" (Genesis 15:13-14). The Egypt experience was foreordained – not only the servitude, but the redemption which was to follow.

Likewise, the Torah refers to the night of the Exodus as "a night of watching" (Exodus 12:42). It was a day anxiously anticipated by both God and the Jews beforehand, and one which has been commemorated annually ever since.

But something does not fit. When God appeared at the Burning Bush, He instructed Moses to go to Pharaoh and say, "The God of the Hebrews chanced upon us" (nikra aleinu; Exodus 3:18). Chanced upon?! Did God "happen to" meet them – as if God were going about, minding His own business, and then "bumped into" Moses – and subsequently commanded him to redeem the nation of Israel? How can the Torah use such seemingly inappropriate terminology? Was the Exodus indeed precipitated by a chance encounter?

There is something else very curious about the story of the Exodus. When God first sent Moses and Aaron to Pharaoh to ask that he grant Israel a three-day retreat in the desert, their initial efforts at what we'd today call "shuttle diplomacy" were an abysmal failure. Not only did Pharaoh refuse their request outright, but he concluded that the Hebrew slaves must have too much spare time on their hands and were thus cooking up such wild ideas. As a result, he ordered that the slavery be made even more intense: Egypt would no longer provide the straw, yet the Israelites would have to produce the same number of bricks.

Needless to say, the morale of the people, initially quite receptive to Moses' encouraging words of prophecy, plummeted. They wanted nothing other than to be left alone to serve Pharaoh. Don't rock the boat. Don't rouse the anti-Semites, giving them an excuse to take a "sword in their hand to kill us" (Exodus 5:21).

Why did God have to put Israel through all this? Why make the bondage even more oppressive just when they were on the threshold of redemption? If it was time for the Exodus, so redeem them immediately! And if the time was not yet ripe, why not just wait another month before sending Moses? Why send him early, have him get nowhere and even make things worse – only then to turn around and redeem them?

Rabbi Tzadok HaKohen of Lublin, the great 19th century Chassidic master, explains there are two levels of Divine providence, two ways in which events of this world occur.

The first type is when events transpire more or less the way we would expect. Let's say you plan a trip to Europe. You purchase the airline tickets months in advance, arrange the hotel and itinerary, brush up on the language, remember your toothbrush, and do everything possible to avoid surprises. If the trip ultimately goes smoothly, that certainly requires God's providence; He has no shortage of ways of frustrating your plans. But we would refer to this as providence which goes according to plan – the way we would expect it.

But there's an entirely different level of Divine providence – when events occur in a way you would have never imagined. You wake up one morning going about your ordinary affairs, and you then bump into an acquaintance you never see who offers you a job on the other side of the country – and you find yourself flying off to some totally unexpected and life-changing destination.

When God orchestrates events in such unexpected ways, He sends an unequivocal message: "I am running the show. This is My act, entirely irrelevant of your own efforts, for or against."

When God orchestrates events in unexpected ways, He sends an unequivocal message: "I am running the show.”

Much of what occurs in our lives is the lower form of providence – nothing really out of the ordinary, life roughly going according to plan with a tolerable number of twists and turns. At times, however, God's higher providence assumes control. We see God take control of our lives and direct them where only He knows they must go.

Thus, in one sense, the Exodus was "unexpected." God made it occur against all odds. He made the servitude entirely hopeless, more oppressive than ever – and then He turned around and saved us.

By any standards – demographically, sociologically, culturally – the Jewish people should have never survived in Egypt. They were a downtrodden minority, with no rights or legal status. At best they should have quietly disappeared, absorbed into the host nation, both physically and culturally. Yet as the Torah attests, not only did they maintain their separate identity, but they thrived and multiplied.

Our existence is entirely miraculous. By rights, we should not be here today. We should have never survived in Egypt, and we certainly should have never made it out en masse. We exist solely because of God's guiding Hand. We are a supernatural people, neither a product of nor bound by the natural physical world.

With the redemption from Egypt, we could never again see ourselves as a "normal" people. We are not just a nation like any other – who happens to be blessed with an extra helping of commandments. Rather, we are a people who have no right to exist in the first place – if not for God's guiding Hand. We are a special people, with a unique Divine mission that requires unique Divine intervention. This is the enduring message of the Exodus.

(Some ideas based on a lecture by Rabbi Berel Wein - www.rabbiwein.com.)

When I Left Egypt