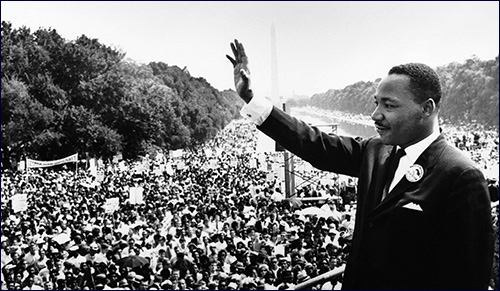 Martin Luther King had a dream. Did his wife and family support it?

On August 28, 1963, from the steps of the Lincoln Memorial in Washington, Martin Luther King, Jr., whose contributions and influence we will mark this coming Monday, delivered what ultimately became his signature speech. Many identify that address, delivered to over 250,000 civil rights supporters that had gathered for the March on Washington, as the defining moment in the American civil rights movement.

What many don’t know is that the now-famous “I have a dream” speech was not intended to be given that day. Dr. King had actually delivered a different speech and was moving to close when a woman called out from the crowd, “Tell them about the dream, Martin!” He then deviated from his original ending, partially improvised on the spot, and launched into a vivid and compelling description of his dream of freedom and equality for all.

Due to hard work, resolve and perseverance, MLK’s vision went from a dream to at least a partial reality. His dream was not about himself, his advancement, or his glory. He dreamt of a better, more just and fair world in which all are respected, appreciated and treated equally and fairly.

Do our dreams include a vision for a better world for all or just for ourselves?

Starting in 2024, a new initiative called Mars One will begin sending people to Mars in the hopes of creating a permanent human settlement there. Missions will leave every two years to bring people. The decision to go is irreversible, as those that move will have a one-way ticket with no mechanism to come home. Furthermore, under Martian gravity, a person’s bone density would decrease significantly and he or she would be unable to return to withstand Earth’s gravity, which is far stronger.

The organization publicly invited all those interested to apply for a spot and remarkably, since just April of last year, more than 200,000 individuals have applied. Last month, 1,058 applicants were contacted and told that they had made it through to the second round. Among them, is 38-year-old Ken Sullivan, a medevac pilot from Utah who has always dreamt of exploring and inhabiting another planet. According to the Salt Lake Tribune, there is only one minor problem. Ken applied without ever consulting his wife Becky, and now the two are struggling with what his dream means for their marriage and family.

“The question is do we get divorced now or get divorced later,” she said. “If I stand in the way of his dreams and passions, then we get divorced now, so I have to be supportive.” Ken’s dream is not only affecting his wife, but it has unalterable consequences for his four children, ranging in age from 6 months to 13 years old who, if he is selected, stand to never see their father again. The permanent effect on his family is not lost on Ken, who said,, “I just hope the family will be able to forgive me down the road. Hopefully there isn’t too much hatred of my being selfish in pursuing a dream that isn’t theirs.”

What do Ken’s children think of his father's dream? Dreams are wonderful, significant, and important. They cause us to aspire, to be ambitious and to seek out goals. But dreams should bring us closer to the people we love, not drive us apart from them. Dreams should include those that we care about, not marginalize them. Dreams should be compatible with and reinforce our values, our commitments, and our obligations, not cause us to abrogate, distort, or compromise them.

I cannot relate to the over-200,000 people who are ready to voluntarily leave our planet and all that inhabit it, never to come back here or see those people again.

Many of us, like Ken, are putting our dreams ahead of our families.

There is nothing wrong with dreaming of a low golf handicap or competing in a triathlon. It is wonderful to dream of professional or financial success beyond imagination. But these dreams must be pursued in moderation, with the consent and cooperation, hopefully followed by support, of our families, as well as in conjunction with our other responsibilities, not in place of them. Our dreams must never make us judgmental or intolerant of those who don’t share them.

Like Martin Luther King, Jr. we should all have dreams and work hard to make them into reality. But like Dr. King, our dreams should be inclusive, noble, balanced, sophisticated, serve to better the world and bring people closer together. Most importantly, our dreams should be coordinated with our families and pursued only with their support.

The Talmud describes what happened when the sages approached Rabbi Elazar Ben Azarya to accept the position of Nasi, the head of the Sanhedrin. He must have been stunned by the invitation and incredibly excited and enthusiastic. After all, Nasi was the most prestigious and prominent position of the Jewish people and he was only 18 years old at the time. Nevertheless, Rabbi Elazar’s response to them is so instructive. “I have to consult with my wife before I can give you an answer,” he said. Though it would have been a dream come true, he refused to accept the dream position without the buy-in and support of his wife first.

Ken Sullivan’s application is unconscionable. Dreams should never hurt, cause pain or create division. They should heal, unify, and create a better circumstance for ourselves, our families and the world.

To This Day
The Blue Beyond
Great Place to Live
Is Eating Supposed To Be Spiritual?
Comments
MOST POPULAR IN Current Issues
Our privacy policy