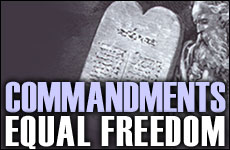 Disciplining oneself to observe the mitzvot of the Torah sounds about as fun as twisting oneself into a pretzel. But as any virtuoso will testify, it is from discipline that greatness springs forth.

The Jewish holiday cycle shows that just seven weeks after being freed from bondage in Egypt, the Jewish nation stood at the foot of Mount Sinai.

When Moses petitioned Pharaoh in Egypt, he said: "God has sent me to tell you, 'Let My people go, so that they may serve Me in the desert.'" And sure enough, barely two months after leaving Egypt, there they were in the desert receiving not just 10, but 613 commandments. That breaks down to 248 positive and 365 negative commandments -- all with hundreds of details about how, when, and where to carry out each individual command.

So much for freedom!

A young prodigy enters the hallowed halls of Julliard. She is subjected to a grueling regimen of instruction and practice followed by more instruction and more practice. Guided by the erudite vision and steady hand of a maestro, the student is carefully led through a progression conceived by masters. It is all part of the careful development of musical talent and technique. The discipline is exacting, the demands are great, and the rules are to be strictly adhered to. And the goal of all this is "freedom" -- the nurtured freedom of spontaneous expressions of genius.

The untrained eye sees only the effortlessness of silken spontaneity. Michael Jordan makes it look so easy that kids everywhere think all they need is the right pair of sneakers and they too will be able to perform airborne ballet with a basketball.

Genius is a gift. But greatness is an achievement. All the God-given talents in the world will never budge from the realm of potential if they aren't harnessed, molded, developed, and guided. This is exactly why masters, mentors, and basketball coaches -- though appearing to tie their charges in one knot after another -- are indispensable instruments of freedom. They unlock potential, liberate talents, and create the dynamics necessary for the expression of seemingly effortless spontaneity and creativity.

In the eyes of the Torah, every Jew is a spiritual prodigy. At the Shabbat meal on Friday night, Jewish parents bless their sons to be "like Ephraim and Menashe," and bless their daughters to be "like Sarah, Rebecca, Rachel, and Leah."

In blessing our daughters to be like Sarah, we are not praying that they should become another Sarah -- for there can never be another Sarah. Instead we pray that just as Sarah's life was a remarkable expression of one woman's potential, such should be the destination of all our children. That they might invest their best efforts in an ennobled encounter with the special circumstances of their existence, and therein nourish the imaginable while making possible the unimaginable.

As a Jew sets out to confront life, it is with God as the coach and mitzvot as the discipline. This system of spiritual directives works to simultaneously harness and liberate the spontaneity of the human spirit in the dance of life. As detailed and far reaching as the mitzvot may be, when set against the situational matrix of life, they are recast as indispensable sign posts which hone our intuition as they indicate the direction in which we are to go -- and grow.

The Torah says: "Be careful to observe the mitzvot of God, and His ordinances and statutes, as He has commanded you. Do what is straight and good in the eyes of God."

There is a perplexing side to this exhortation to carefully fulfill the commandments in the Torah. How could it be that after being told to "be careful to observe the mitzvot," there is still room to say "do what is straight and good?" Are the qualities of straightness and goodness not requisite to mitzvah-observance? Is a mitzvah still identifiable as a mitzvah if it is devious and corrupt?

The Torah is alluding to the fact that even after one is committed to observing all 613 mitzvot, there is much in life which is left unaddressed. In all those instances -- be they interpersonal, professional, religious, or otherwise -- the Torah says that the responsibility of living a life shaped by straightness and goodness is laid clearly at our doorstep.

George Bernard Shaw said: "Only on paper has humanity yet achieved glory, beauty, truth, knowledge, virtue and abiding love." The mitzvot are ?tudes of character. Like a Chopin piano piece that works to blend refined technical skills with musical harmony, the mitzvot act as living mediums through which our latent capacities for growth are transferred from paper potential to the sturdy material of everyday life.

The acceptance of the Torah by the Jewish people at Mount Sinai was not a repudiation of the freedom achieved at the Exodus. These were not slaves who sought to exchange one hopeless yoke for another. This was a people who well understood that unharnessed potential is potential squandered... that an undirected life is a carelessly gambled life... and that the diminution of thoughtful rules and disciplines are open invitations, not to human freedom, but to savage anarchy.

As Johannes Brahms said, "Without craftsmanship, inspiration is a mere reed shaken in the wind."

Matzah: The Taste of Freedom

The Story of a Prayer
Should I Break Up, Get Engaged or Keep Dating?
Time Is Your Precious Commodity
A Constant World in Flux
Comments
MOST POPULAR IN Passover
Our privacy policy