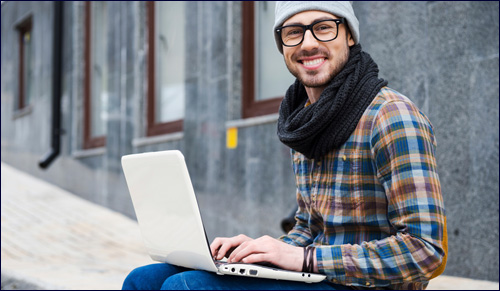 Ever since Leo Rosten turned the world onto Yiddish, English-speakers have delighted in our Mama-loshen with its majestic ability to turn a word or phrase into a thesaurus of joy, misery, sarcasm, humor, and truly hysterical curses with a relish that few other languages can match. What other language has 100 words for “idiot?” There’s the polite idiot, the grubby idiot, the greedy idiot, the clumsy idiot … to the idiot who can win a Nobel prize but can’t close his sneakers – with Velcro.

So, do we keep up with the times? Rosten referred to “Yinglish” and “Ameridish.” Do I know the difference? Do you? Write me. I read it 1,000 times, showed it around, did massive research, and to settle it once and for all, I call it “Yinglidish.” As Yinglidish is, or could be growing, I felt it was my duty to add new words for Jewish Young Adults (JYA’s) … to get with their need to “shorten.”

Face it. Between txtesing, tweeting, IMimg and SMShing not one person under 30 can say a whole word in any language without ROFLing. (In a few years, not only have we reduced millions or words to maybe seven abbreviations, but GenZ will lose the power of speech altogether. The good news is, they’ll have palms that can double for catcher’s mitts.)

In my never-ending quest to keep pace, the following are new words I created, whether by “combining,” hyphenating, compounding or portmanteau-ing that I hope will keep Yinglidish alive even when we’re mime-aloshening.

MEANING: A wonderful person who isn’t so good-looking.

USAGE: “OK, Milton, so a Natalie Portman she isn’t. Ah, but a personality? She volunteers 36 hours a week studying with the Matzo Preservation Society to keep our bread of affliction from crumbling and adding to Global Warming. She is some meesmensch!”

MEANING: A joyous occasion that: 1.) took such work for so long one could plotz; 2.) that caused so much fighting and tsouris, one could also plotz.

USAGE: “Thank God the Bar Mitzvah was a success! Eight caterers backed out, the Shul was booked up until our Benjamin was 16, so we had to wait for a cancellation! The bubble machine we rented kept flooding! And would you believe the cake arrived saying: ‘For Ben On Your Christening!’ This was some shvimcha!

“Oy. Tante Bella threw a fit at the Chasseneh because she was seated next to Cousin Mendel, who she had a fight with the week before! The bubbes didn’t stop kvetching about the food! The family – 20 people from Boca – brought 10 more people! A monsoon hit Brooklyn two hours before, 50 people didn’t show up and we still had to pay for their chickens!”

MEANING: A grandmother who’s turned 60 into the new 30.

USAGE: “Do you believe Bella since her tummy tuck never mind the Botox? With four grandchildren yet. She’s some bubbchikel!”

MEANING: That gruesome moment when the group is happily doing the Hora … and two rotten dancers get in the middle of the circle and try to do a duo.

USAGE: “Oy vey … the ambulance just came! The paramedics think Uncle Morris may have a dislocated knee and Uncle Yankel, a twisted ankle. I was hora-fied when I saw two 80-year-old men trying to kick with the same foot at the same time!”

MEANING: This is the person who, on Shabbat, at the shul Kiddush or on holidays, grabs the challah and tears a piece so big, it could feed all 3,300 Jews in Kazakhstan.

USAGE: “Pssst. Did you see Levine? What he did? Again with the challah? Stuck his hand in and took the best bumps – all of them! He is a challahchazzer or what? Maybe we should report him to the Rabbi for challahchazzing. It must be a sin somewhere.”

MEANING: No, it’s not an Irish introjection, but a simple, shorter way of saying one wants a mixture of bagels and bialys.

USAGE: “Sol darling, when you go to the ‘appetizing’ make sure with the lox you also get begallys.”

MEANING: A lovely, down to earth person when he’s not “Schnappsing.” (Think Haymitch in The Hunger Games.)

USAGE: “Listen Hannah, he’s a bit of a haymshikk. The terrific news is, he’s a doll three time a year! But darling, do Purim … alone. Maybe go to a fascinating faraway place, like Laos for a month, maybe two.”

MEANING: A person who is or thinks he is the God of Mitzvahs and wants everyone to know it.

USAGE: “So Haim, are you going to the testimonial dinner for Fliegelmeister?

“Well, he did donate 10 million for the Advancement of Israeli Chick Peas. I hear there’ll be a sculpture of him – in hummus.”

“The man is such a mitzmachah! If he’s that terrific, why does he need so many character witnesses?”

MEANING: 1.) A Google glitch; it’s annoying; or crashes all by itself; 2.) When Googling becomes (God forbid) an addiction.

USAGE: “I’d look it up to prove to you I’m right and you’re wrong, but my Mac is currently kloogled.”

“David, darling, stop already with the computer before you become kloogled. I don’t think my KrankKare covers that. Irving! Get the policy!”

Should you too, suffer from Meshugling, and wish to add to my mission, by all means suggest away!

Jew Tube: The New TV Season
In the Shadow of David and Goliath
Where Do the Laws of Nature Come From?
Saadiah Gaon, Rashi and Maimonides: How Three Rabbis Revolutionized Judaism
Comments