The Amazing Yiddish Album Nominated for a Grammy 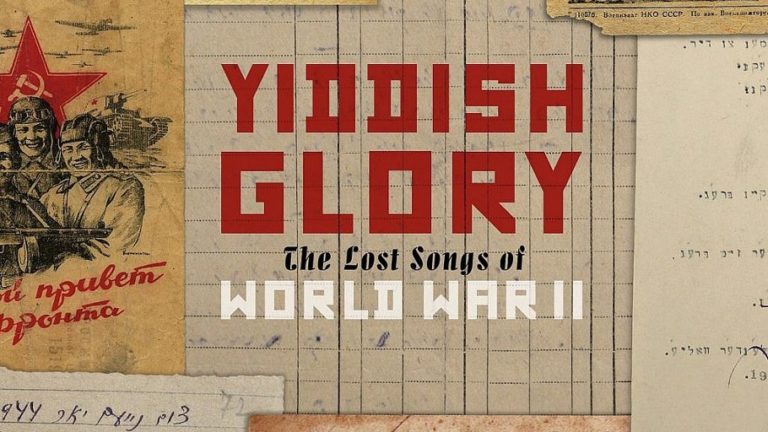 Suppressed for a lifetime, this music was discovered and recorded, and then nominated for a Grammy.

One of the entries nominated for the 2019 Grammy Music Awards is a remarkable collection of songs that was lost for over 70 years. The songs in Yiddish Glory, nominated for “Best World Music Album”, were written by ordinary Jews in the Soviet Union during the Holocaust. Together they describe a lost Jewish world full of religious yearning, tender family love, and also fear and horror during the war.

Their authors include a ten-year-old orphan boy and a 73 year old woman, factory workers, soldiers and resistance fighters. That this music, suppressed for a lifetime, was discovered and recorded and then nominated for a Grammy is nothing short of miraculous.

In the 1930s and 1940s, the Soviet Union was home to an official Cabinet of Jewish Culture, which encouraged and recorded Jewish artistic expression. During World War II it was led by Dr. Moisei Beregovsky, a Jewish ethnomusicologist from Ukraine who painstakingly documented Jewish musical traditions throughout the USSR. With the Soviet annexation of Poland in 1939, two million Jews became citizens of the Soviet Union. By 1942, the majority of Jews still alive in Europe lived in the USSR. Most of these Jews were Yiddish speakers, and the songs they penned capture the last moments of vibrant Jewish life in much of Europe. 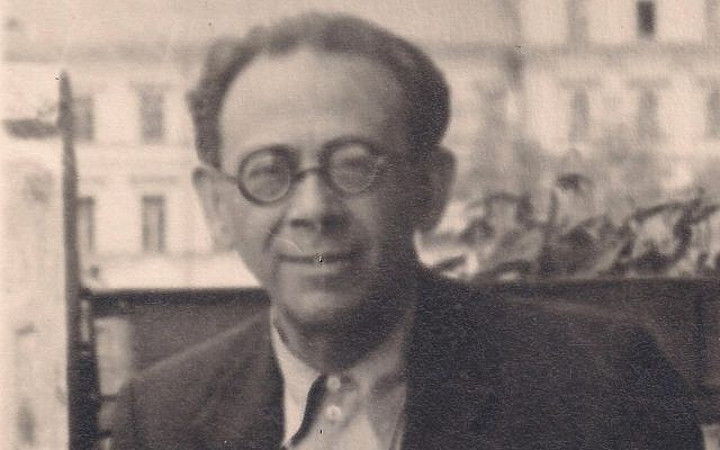 While World War II raged, a Soviet Yiddish newspaper carried an article about Dr. Beregovsky’s music research. Soon, letters were pouring in from all corners of the Soviet Union and beyond containing personal, amateur songs. The researchers soon had many letters from soldiers and civilians, refugees and survivors of Nazi massacres, who’d each written Yiddish songs about their experiences.

Dr. Beregovsky gathered together hundreds of these Jewish songs, preserving their words and beauty for posterity - or so he thought.

After World War II, Soviet leader Josef Stalin became increasingly anti-Semitic and many Jewish artists and intellectuals were arrested, imprisoned in Siberian gulags, tortured and murdered. Dr. Beregovsky’s office was shut down in 1949 and in 1950 he too was arrested and imprisoned in Siberia. His unique manuscripts were lost, presumed destroyed. Dr. Beregovsky died believing the songs he’d documented and transcribed were gone forever.

In 1993, library workers at the Vernadsky National Library in Kiev, Ukraine, made a startling discovery. Inside a collection of unmarked boxes lay hundreds of Yiddish songs collected by Dr. Beregovsky and his colleagues. The workers did nothing with the music, but about ten years later, when Professor Anna Shternshis, who directs the Anne Tanenbaum Center for Jewish Studies at the University of Toronto, visited the museum, they showed her the manuscripts. Prof. Shternshis was stunned. “Initially, I thought about writing a book based on the archive,” she explained. In time, though, Prof. Shternshis thought of a more dramatic way to bring some of these songs to a wider audience. She started bringing together musicians to record the songs.

Since only the songs’ words were recorded, Prof. Shternshis needed to find a musician who could create tunes to go with the lyrics. She began collaborating with Russian musician Pavel Lion, who goes by the stage name Psoy Korolenko. “Sometimes we had clear references in the lyrics. The use of specific words let us know exactly which known Yiddish song the song was supposed to be sung to,” Lion explained. Other times he had to use his imagination. He borrowed freely from Yiddish melodies, Russian and Ukrainian folk tunes and Soviet anthems in crafting music to go with the historic words. 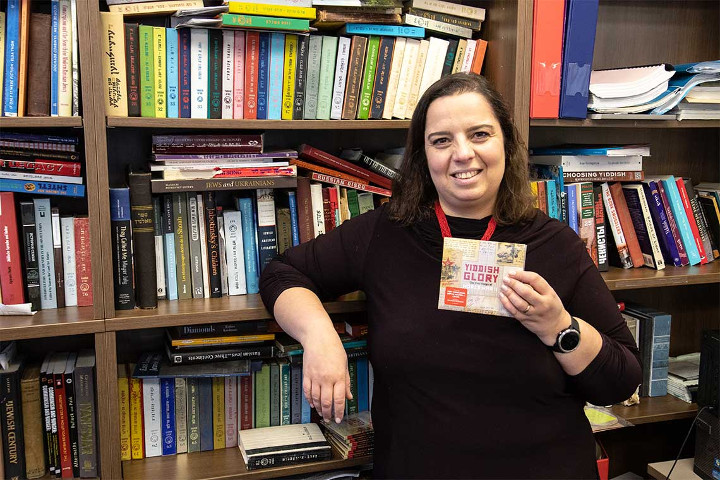 Prof. Shternshis chose 18 songs to record and assembled a team of five singers and five instrumentalists. One of the singers, Sophie Milman, was born in Russia and had a grandfather who served in the Soviet army and whose life seemingly mirrored some of the experiences in the Yiddish songs.

The resulting album is called Yiddish Glory, released by Six Degrees Records in February 2018. Its 18 tracks range from upbeat to haunting. Each one tells a crucial story about Jewish life.

In 1945, a researcher recorded a song called “My Mother’s Grave”, written by a ten-year-old Jewish orphan named Valya Roytlender who was living in Bratslav, Ukraine. “Oh mama, who will wake me up? Oh mama, who will tuck me in at night?” are its haunting Yiddish words. (In the album, this song is performed by Prof. Shternshis’ son Isaac Rosenberg; he was only 12 when he recorded it, making him one of the youngest Grammy nominees ever.)

In Kazakhstan, another researcher near the close of World War II transcribed a Yiddish song probably written by a Polish or Ukrainian Jew who fled to Central Asia to escape the Holocaust. Its title is caustic, “Purim Gifts for Hitler’, and it describes an earlier attempt to annihilate the Jews when Haman tried to wipe out the Jewish people in ancient times. “You’re not my first enemy” the song asserts; “before you I’ve had many others… Your bleary end will be on Haman’s tree, while the Jewish people live on and on.”

Another song by a Jewish refugee in Kazakhstan records, “I’ve already suffered endlessly.. Look, I’ve arrived here naked and sickly only with little pieces of scraps. I’ve run away from the murderers and the slaughterers from that cursed German, Hitler. And the mountain speaks to me, it speaks to me: ‘Enough of this crying and complaining, Al tirah avdie ('don’t fear' in Hebrew) Yaakov, don’t have any fears….”

The song “Babi Yar” was written after the war by a 73-year-old Holocaust survivor named Golda Rovinskaya. In it, she describes the massacre of over 33,000 Jews in Babi Yar, near Kiev, over two days of killing in 1941. “Oh, blood gushed out from all sides. The earth was stained red from blood” her song describes.

Some of the songs on the album are about fighting the war. The song Afm Hoychn Barg (On the High Mountain) makes fun of Hitler’s inability to capture natural resources in Ukraine. Shpatsir in Vald (A Walk in the Woods) is about a soldier saying goodbye to the woman he loves. Chuvasher Tekhter is about the nearly one million women who fought Hitler for the Soviet Union during World War II.

The urgency in the songs reminds us that the Jews who wrote them were living with the ever-present specter of death, as they were targeted by the Nazi killing machine. Their message speak for the millions of Jews who never got the chance to record their thoughts and feelings during the Holocaust. The song “Taybil’s Letter to Her Husband at the Front” was written by a 28-year-old Jewish woman who worked as a tailor during the war sewing uniforms for Soviet soldiers. “Slash them, smash them, have no mercy, take revenge for us all” she urges her husband fighting Nazis.

The song Mayn Pulemyot (My Machine Gun) describes a Jew who fled the Holocaust and now is fighting with the Soviet Army against Hitler: “I lie beside my machine gun and softly sing a Yiddish tune. All around me, everything is quiet, the only sound is the swish of the grasses. I remember the joy of my shtetl; who wouldn’t recognize it? Now it’s been emptied out, there are no people left. Oh, all the houses have been burned."

“They don’t have any parallels in other collections of Holocaust music,” explains Prof. Shternshis. The songs give us a unique glimpse into the last years of Yiddish life and culture in eastern Europe. Whether or not the beauty and power of Yiddish Glory wins at the Grammys, these songs deserve to be heard and remembered, along with the life stories and experiences of their authors.