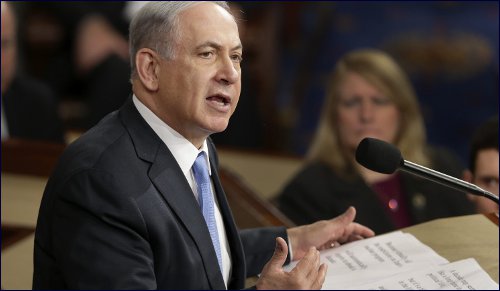 Benjamin Netanyahu’s address to Congress was notable in two respects. Queen Esther got her first standing ovation in 2,500 years. And President Obama came up empty in his campaign to preemptively undermine Netanyahu before the Israeli prime minister could present his case on the Iran negotiations.

On the contrary. The steady stream of slights and insults turned an irritant into an international event and vastly increased the speech’s audience and reach. Instead of dramatically unveiling an Iranian nuclear deal as a fait accompli, Obama must now first defend his Iranian diplomacy.

In particular, argues The Post, he must defend its fundamental premise. It had been the policy of every president since 1979 that Islamist Iran must be sanctioned and contained. Obama, however, is betting instead on detente to tame Iran’s aggressive behavior and nuclear ambitions.

For six years, Obama has offered the mullahs an extended hand. He has imagined that with Kissingerian brilliance he would turn the Khamenei regime into a de facto U.S. ally in pacifying the Middle East. For his pains, Obama has been rewarded with an Iran that has ramped up its aggressiveness in Iraq, Syria, Lebanon, Gaza and Yemen, and brazenly defied the world on uranium enrichment.

He did the same with Russia. He offered Vladimir Putin a new detente. “Reset,” he called it. Putin responded by decimating his domestic opposition, unleashing a vicious anti-American propaganda campaign, ravaging Ukraine and shaking the post-Cold War European order to its foundations.

Like the Bourbons, however, Obama learns nothing. He persists in believing that Iran’s radical Islamist regime can be turned by sweet reason and fine parchment into a force for stability. It’s akin to his refusal to face the true nature of the Islamic State, Iran’s Sunni counterpart. He simply can’t believe that such people actually believe what they say.

That’s what made Netanyahu’s critique of the U.S.-Iran deal so powerful. Especially his dissection of the sunset clause. In about 10 years, the deal expires. Sanctions are lifted and Iran is permitted unlimited uranium enrichment with an unlimited number of centrifuges of unlimited sophistication. As the Wall Street Journal’s Bret Stephens points out, we don’t even allow that for democratic South Korea.

The prime minister offered a concrete alternative. Sunset? Yes, but only after Iran changes its behavior, giving up its regional aggression and worldwide support for terror.

Netanyahu’s veiled suggestion was that such a modification — plus a significant reduction in Iran’s current nuclear infrastructure, which the Obama deal leaves intact — could produce a deal that “Israel and its [Arab] neighbors may not like, but with which we could live, literally.”

Obama’s petulant response was: “The prime minister didn’t offer any viable alternatives.” But he just did: conditional sunset, smaller infrastructure. And if the Iranians walk away, then you ratchet up sanctions, as Congress is urging, which, with collapsed oil prices, would render the regime extremely vulnerable.

And if that doesn’t work? Hence Netanyahu’s final point: Israel is prepared to stand alone, a declaration that was met with enthusiastic applause reflecting widespread popular support.

In its near-70 year history, Israel has never once asked America to fight for it.

It was an important moment, especially because of the libel being perpetrated by some that Netanyahu is trying to get America to go to war with Iran. This is as malicious a calumny as Charles Lindbergh’s charge on Sept. 11, 1941, that “the three most important groups who have been pressing this country toward war are the British, the Jewish and the Roosevelt administration.”

In its near-70 year history, Israel has never once asked America to fight for it. Not in 1948 when 650,000 Jews faced 40 million Arabs. Not in 1967 when Israel was being encircled and strangled by three Arab armies. Not in 1973 when Israel was on the brink of destruction. Not in the three Gaza wars or the two Lebanon wars.

Compare that to a very partial list of nations for which America has fought and for which so many Americans have fallen: Kuwait, Iraq, Afghanistan, Somalia, Vietnam, Korea, and every West European country beginning with France (twice).

Change the deal, strengthen the sanctions, give Israel a free hand. Netanyahu offered a different path in his clear, bold and often moving address, Churchillian in its appeal to resist appeasement. This was not Churchill of the 1940s, but Churchill of the 1930s, the wilderness prophet. Which is why for all its sonorous strength, Netanyahu’s speech had a terrible poignancy. After all, Churchill was ignored.

Why You’ve Never Heard of This Man