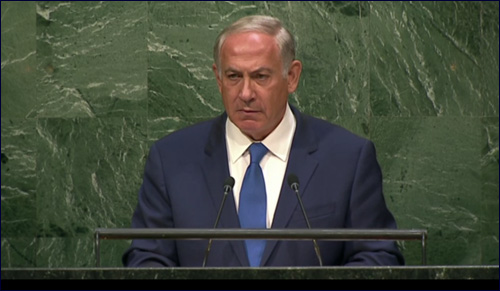 What is the value of spending our time on lost causes?

As I watched the proceedings at the United Nations last week I couldn’t help but remember the story of Franklin Delano Roosevelt and my father – and, most important of all, the lesson my father taught me I needed to learn from that historic moment.

I would’ve liked to say the time my father met with Franklin Delano Roosevelt, but that wouldn’t be true. That meeting should have happened, but it didn’t. And therein lies a remarkable tale that happened two days before Yom Kippur in 1943.

It is one of those much repeated lies about the events of the Holocaust that the world simply did not know what was happening to European Jewry by the time of the early 40s. Hitler had long since made clear his genocidal plans and there were sufficient eyewitness accounts of concentration camp atrocities and mass murders to verify the seriousness of his efforts. The unimaginable was a reality and it was no longer a secret. Yet the world turned a blind eye to Holocaust horrors. Tragically, the President of the United States, then revered by almost all Jews as a saintly figure, still chose not to intervene by word or by deed.

What was the Jewish community in the United States to do? It is hard to put ourselves back into the psyche of a previous generation, a generation for whom demonstrations against government policy were unknown, protests unheard-of. Even to plead on behalf of the interests of one particular group was considered by most as un-American.

Silence in the face of the slaughter of their fellow Jews was an impossible option, but what was a viable alternative?

Rabbinic leaders were perplexed; silence in the face of the slaughter of their fellow Jews was an impossible option, but they had difficulty coming up with a viable alternative. Orthodox spiritual leaders in particular faced an additional problem: With their beards and noticeably different garb, their appearance made them stand out as outsiders. And as fairly recent immigrants, many of them hardly spoke English. How could they possibly have any influence on American policy?

And yet, two days before Yom Kippur in 1943 history records that over 400 Orthodox rabbis, with their black hats and rabbinic frocks, converged on Congress and the White House in a stirring display of unity to rescue Jews from Nazi extermination. These were the elders of the Orthodox community in the 1940s, mostly European-born Talmudic scholars, as unfamiliar with the political ways of the New World to which they had emigrated as they were with its language.

And one of them was my father. 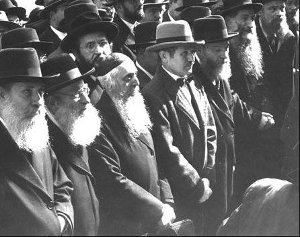 My father, Rabbi Ben Zion Blech, is in the front row, fifth from the left

The rabbis gathered in front of the Capitol, recited the Kaddish for all those who had perished, sang the traditional Jewish prayer for the nation's leaders to the tune of the “Star Spangled Banner”, and solemnly read aloud, in English and Hebrew, their petition calling for the creation of a special Federal agency to rescue European Jewry and expand the limited quota on Jewish refugee immigration to the United States. They then marched to the White House with an urgent plea to allow them a few moments to make their case personally to the President.

FDR avoided the rabbis by leaving the White House through a rear exit while they marched silently in front. He claimed another pressing engagement. White House records confirmed his calendar was clear. The rabbis were snubbed. The Holocaust and the genocide of six million continued as before.

What Did They Accomplish?

The question begs to be asked: What did the rabbis accomplish?

It is not what we accomplish but what we attempt that truly defines us.

My father often told me that this was one of the most important lessons I had to learn in life. God does not judge us by way of our success, but by way of our efforts. It is not what we accomplish but what we attempt that truly defines us.

Just imagine if those rabbis who were part of what is today known as the March of the Rabbis would have simply accepted defeat without even a struggle, acquiescing to the slaughter of their people by their silence. How would they have been able to face the judgment of history as well as that of the heavenly court at the end of their days?

What we accomplished, my father told me, is that we did not forsake our role as spiritual leaders. We did not stand idly by at the blood of our brothers and sisters. We refused to remain indifferent to evil and the suffering of our people. We were not tainted by the sin of passivity - a crime which can condemn a silent bystander with guilt comparable in some measure to the actual perpetrator.

Heroes, my father always stressed, don’t always need to be successful. All we can ask of them is to do everything in their power - and the rest is up to God.

So that’s how I judge all the efforts I’ve expended throughout the years on “lost causes.” And that’s how I feel as I think about how hard so many of us have tried to block the disastrous deal with Iran which guarantees the Iranians immediate billions for their sponsorship of global terror and guaranteed nuclear capability in the not-too-distant future.

That too is precisely how I felt last week as I watched Prime Minister Netanyahu speaking at the United Nations. Netanyahu is surely no stranger to hostile receptions at the UN. But this time he was able to use the animus toward the Jewish state on the part of the overwhelming majority of member states to good use. At one point during his address to the General Assembly, he pointed out that only 70 years after the Holocaust, Iran was repeatedly threatening the Jewish state with annihilation. But “the response from nearly every one of the governments represented here, has been absolutely nothing. Utter silence. Deafening silence."

And then Netanyahu stood at the podium for what may have been the most agonizing 44 seconds in the history of such addresses at the UN. That truly deafening silence conveyed everything we need to know about the international community and its indifference toward efforts to annihilate Israel.

He followed the silence by stating the obvious: “Perhaps you can now understand why Israel is not joining you in celebrating this deal. If Iran’s rulers were working to destroy your country, perhaps you’d be less enthusiastic about the deal.”

What good, you may ask, did it do for Netanyahu to remind an entire world body of leaders of their unrestrained and unchecked anti-Semitism? The answer remains the same as the truth taught to me by my father: At least history will record that someone spoke out - and that in and of itself is heroic.

Aish: Proud to be a Jew