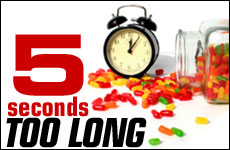 Do you know how much dirt you can pick up in five seconds?"

I first learned about the five second rule from my young brother-in-law. He was visiting us for the weekend and I had just dropped a particularly delicious looking morsel of food on the floor. As I was giving it a last woebegone glance, he scooped it up and popped it into his mouth.

"Five-second rule," he told me blithely. Seeing my quizzical expression he elaborated. "Any food that spends less than five seconds on the floor is not yet contaminated. You can eat it -- no problem."

Warning bells in my mind told me that I should take my health advice from a doctor, not from a well-intentioned teenager, but the rule certainly did have appeal. No need to lose tasty tidbits simply because they had grazed the floor. Just retrieve them quickly and don't think too hard. And, in any case, how many germs could attach themselves to a piece of steak in the space of three seconds?

I never officially adopted the rule, but, as the years passed, and I watched my brother-in-law repeatedly availing himself of the convenient loophole, I found myself occasionally snatching up dropped tidbits. After all, how bad could it be?

Scanning the headlines in the New York Times email last week, I was struck by one in particular. "The Five-Second Rule Explored, or How Dirty Is That Bologna?" it asked. I eagerly clicked on the title to find out more. Harold McGee was reporting on a microbiological study conducted by a professor at Clemson University who set out to discover the truth, or lack thereof, behind the five-second rule. The findings were grim.

As the Clemson paper explained, the true pioneer in this improbable field of research was one Jillian Clarke, a high school intern at the University of Illinois. Clarke did a survey and discovered that 70 percent of the women queried and slightly more than half the men knew of the five-second rule and many followed it (well, at least I wasn't alone).

Clarke's next step was to contaminate ceramic tiles with E coli, place cookies and gummy bears upon them (yes, it was definitely a teen conducting this experiment) and then analyze the food. They were all contaminated with bacteria.

A few years later, Prof. Paul L. Dawson and his colleagues at Clemson decided to take this experiment one step further. So food dropped onto bacteria becomes contaminated, but questions remained. How much? And, more important, how fast?

Using a salmonella broth, the researches doused tile, wood, and carpet with several million bacteria per square centimeter, the amount typical of badly contaminated food. Next, they put test food slices on the contaminated surface and counted how many live bacteria were transferred to the food.

The result? On surfaces that had been contaminated eight hours earlier, slices of bread and bologna left for five seconds collected anywhere from 150 to 8,000 bacteria. Left for a full minute, they absorbed about ten times that amount from tile and carpet, less from wood.

This was sobering news. I took some solace in the fact that Jillian Clarke found that the number of bacteria on the floor of the University of Illinois was so low she couldn't measure it (and my floors must be cleaner than theirs, or so I'd hope) but the author was quick to point out that it takes as few as ten salmonella bacteria and less than a hundred of E. coli to cause illness. He suggested we formulate a new version of the five-second rule: If you drop a piece of food, pick it up quickly, and take five seconds to recall that just a few bacteria can make you sick.

No more tasty tidbits from the floor for me. I have to protect my body.

Like the bologna on the floor, after five seconds, we just aren't the same.

And what about the soul?

Do we not have a five-second rule equivalent which we use in the spiritual realm? Do we not occasionally allow ourselves to see/hear/read things which will only pull us down, assuaging our conscience with assurances that it's a passing moment, a one-time fling? How often do we figure that it's just five seconds, five minutes, five hours...?

It may seem innocuous to flirt with a married coworker. That magazine may appear like a harmless indulgence. Using one's looks to get off the hook when caught in a traffic offense or to garner an extra dessert in a restaurant may seem like an innocent tactic. Off-color jokes are shrugged off as being "only a joke." One can even try to write off a casual encounter as a one-time fling with no serious repercussions.

But innocence lost can never be regained. No matter how short the lapse, the bacteria clings to our souls, making insidious inroads. Like the bologna on the floor, we just aren't the same.

The Secret to a Guilt-free Yom Kippur

How to Build Healthy Self-Esteem

The Spiritual Workout
In the Shadow of David and Goliath
Where Do the Laws of Nature Come From?
Saadiah Gaon, Rashi and Maimonides: How Three Rabbis Revolutionized Judaism
Comments