My Husband’s Insidious Affair with Work 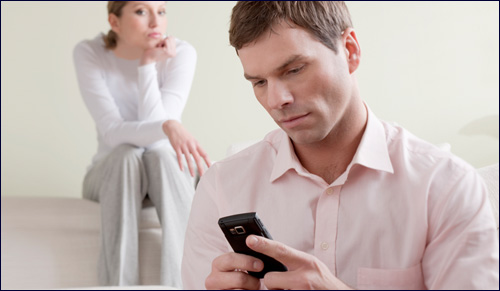 Beware of the dangers of triangulation in your marriage.

A woman complained to me how her husband has become over the two years they’ve been married a workaholic. His job was consuming him. She felt like she was competing for his attention and becoming more and more dissatisfied with the quality of their relationship. The more she asked for attention, the more he resisted which resulted in a series of ugly fights.

“I wonder how things might change if he had 50 million dollars in the bank,” I asked her.

Without hesitating she said, “Ninety percent of our problems would disappear because then we could start working on our relationship again.”

A tripod may provide a strong foundation, but when it comes to relationships, two is the strongest foundation and three is the weakest. The Torah says, “And a man will leave his father and mother, cleave to his wife and they will become one being.” A healthy relationship is formed by two people who create one single emotional bond between them. When a third person or entity is introduced into the dyad, the emotional energy is diluted. This is called triangulation and it can destroy a relationship.

In some respects the husband was having an “affair” with his work and his wife felt left out and betrayed.

In this case, the husband had triangulated work into the marriage. There was now a third “partner” in the marriage. In some respects the husband was having an “affair” with his work and his wife felt left out and betrayed.

There are many forms of triangulation. The most common type is when someone has an affair or has an excessively close tie with a family member or friend. Triangles can be formed with sports, working out, shopping, drugs, community activities, hobbies, and even charitable work. Just because the activity is something “good” doesn’t mean that it is immune from triangulation.

Perhaps the most toxic and insidious of all triangles is when a parent triangulates a child into the marital relationship. When there is serious problem between the husband and wife which they are not willing to face, one or both parents may triangulate one of their children into their relationship to alleviate their emotional pain. The parent is in essence using the child to relieve his or her emotional distress. A common form of this is to turn the child into a confidant, friend, or worse, the parent’s “therapist.”

Parents must never use their children in this way. Children must be allowed to be children and not be forced to be adults for the sake of taking care of the parent’s emotional needs. When a child is forced to take care of mom or dad, it is almost always traumatizing and destructive to the child’s emotional development.

How do you know if a triangle exists in a relationship? The person who is triangulated out of the relationship will feel it and know something’s wrong. It will become obvious to you that your spouse is spending too much time with so and so and investing too much emotional energy. You will feel like you are competing for your spouse’s attention. You may begin nagging and will feel guilty for doing so. And even if you try to stop, you will still feel angry and resentful.

What’s the solution? The person who makes the triangle must break the triangle. This is easier said than done. First of all, triangles are often formed unconsciously; therefore confronting the person may be met with deaf ears. Secondly, since a triangle serves an important emotional function, the person will not very easily let go of it. It’s like trying to take a child’s security blanket away. The person may defend himself and attack you by claiming that you are too possessive, paranoid, jealous, etc.

Don’t give-up. Continue to try to bring the problem to your spouse’s attention. If he or she refuses to face the truth, you may need to seek professional help.

A good practical piece of advice for couples is to always be vigilant and protect your relationship by constructing strong boundaries to ward off the possibility of triangulation. It is especially important for couples to create good boundaries between themselves and their families. Intrusive in-laws and family members are one of the top three causes for divorce. Healthy and happy couples work together to build a fortress around their love in order to protect and nurture it.

Love Is a Verb

I Didn’t Love My Wife When We Got Married

The Power of Touch

Putting Your Spouse First
What Makes Eli Run?
The Tyranny of Materialism
Science Enters the Mysterious Inner World of Consciousness
Comments
MOST POPULAR IN Family
Our privacy policy

What Makes Eli Run?
The Tyranny of Materialism
Science Enters the Mysterious Inner World of Consciousness
BBQ Bourbon Cheese Kugel Recipe
Korach 5782: Visit to Lift the Spirit
That Time The Ivy League Found A Way To Limit Jewish Enrollment
Would You Rather Be Right or Happy?
Korach’s Unique Punishment
Who Was Josephus? The Controversial Backstory of the Famed Historian
Should I Break Up, Get Engaged or Keep Dating?
1 2 3 … 2,896 Next »