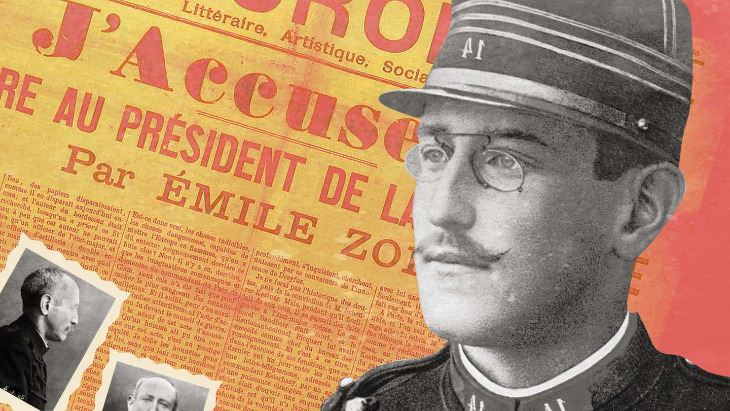 France’s newest museum is dedicated to preserving the memory of Captain Alfred Dreyfus, a Jewish military officer who was falsely accused of espionage over a century ago. His trial ripped apart France, and the issues debated during Dreyfus’ court martial – including the role of Jews in France, antisemitism and the need for a Jewish homeland – continue to reverberate today.

“I say to the young: forget nothing of these fights,” French President Emmanuel Macron said when he formally opened the museum on October 26, 2021. “In the world in which we live, in our country, and in our Republic, they are not over.”

Here are five facts about the Dreyfus Affair, and why it’s crucial we continue to remember Captain Dreyfus today.

In 1894, France was facing growing military strength and bellicose language from its newly unified neighbor Germany. Barely a generation before, France had lost the Franco-Prussian War of 1870-1; Germany still occupied the Alsace region in the east of France and many French citizens were still living in exile from that region. 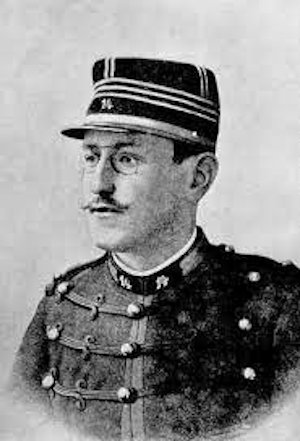 One of the French families that had been forced out of Alsace was that of Captain Alfred Dreyfus, at the time the only senior Jewish officer in the French military. In 1894, Dreyfus was 36 years old and living with his wife and children in Paris. When a letter was discovered in 1894 that indicated someone in the upper reaches of the French military was selling sensitive secrets to Germany, French officials turned on Cpt. Dreyfus. Though they claimed to have damning evidence against him, there was nothing at all to indicate that Cpt. Dreyfus was the spy, including his handwriting which differed markedly from that of the real spy.

On October 15, 1894, Cpt. Dreyfus was summoned to military headquarters. Arrested, he was questioned repeatedly and kept in a cell for months. Dreyfus later described his treatment as amounting to torture. For Cpt. Dreyfus, being accused of betraying the country he loved was horrible, and he soon began to suffer a mental breakdown. “Since his last interrogation, undergone Thursday, he has fainting spells… He always protests his innocence and shrieks that he will become mad before it is recognized. He constantly asks for his wife and children,” recorded the governor of the prison where Dreyfuss was held. (Quoted in Dreyfus: Politics, Emotion, and the Scandal of the Century by Ruth Harris. Metropolitan Books, New York: 2010.)

The real spy was Commandant Ferdinand Esterhazy, who’d been selling French military secrets to Maximilien von Schwartzkoppen, the military attaché at Germany’s embassy in Paris. Yet few officers probing the crime bothered to conduct a real investigation. Dreyfus’ trial was conducted against a backdrop of extreme antisemitism, with mobs of people and French newspapers openly calling for “death to Jews” and spreading vile antisemitic slurs. One of the most advanced newspapers in France at the time, the Catholic journal La Croix, “reached a huge audience during the Dreyfus era, and mixed lurid antisemitism with other themes of interest… According to La Croix the Jews had virtually taken over the Republic… Every incident was linked to the purported conspiracy of Jews to subvert Christianity and French society” (quoted in The Dreyfus Affair: Art, Truth & Justice, edited by Norman L. Kleeblatt. University of California Press, Berkeley: 1987). 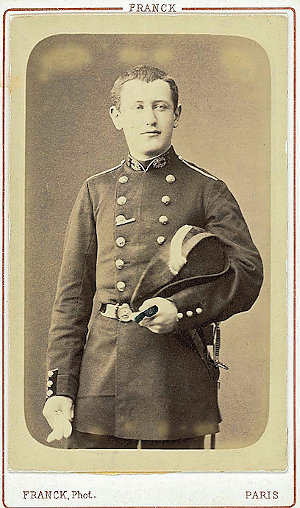 General Auguste Mercier, France’s Minister for War, insisted that Dreyfus be convicted, no matter what the evidence. Realizing that the army’s case against Dreyfus was weak, one of his men, Major Hubert Henry – who’d found the original letter and realized it had been written by a spy – fabricated damning evidence in handwriting that was similar to Dreyfus’. He then perjured himself in court saying that he’d been told by a secret source that Dreyfus was indeed guilty.

Court-martialed, Dreyfus was stripped of his rank and sentenced to life imprisonment on Devil’s Island, off the coast of French Guiana in South America. There, he faced incredibly harsh treatment: guards were under orders never to speak to him, he received spoiled rations that made him sick, and he was manacled to his bed each night.

Evidence soon emerged that Maj. Esterhazy, not Dreyfus, was the true spy. When Esterhazy applied for a promotion, another French officer, Major Georges Picquart, noticed that Esterhazy’s handwriting matched that of the original spy’s letter. He realized that Esterhazy was in regular contact with the Germans and was likely the culprit. Yet even then, French authorities refused to act to free or retry Dreyfus. Esterhazy was court-martialed in 1898 but little evidence was presented against him and he was acquitted. Instead, Maj. Picquart was arrested and charged with forgery. 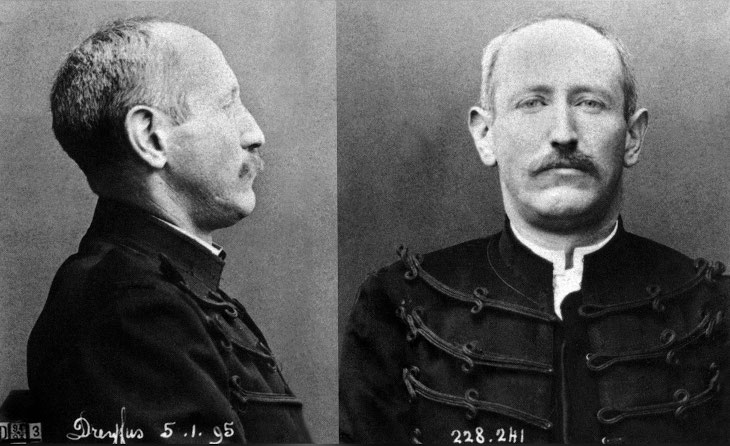 In 1898, Major Hubert Henry, the officer who’d forged the documents that framed Dreyfus, admitted his guilt. Sent to a military prison for more questioning, Maj. Henry took his own life. Yet it would be another year before Dreyfus would be retried (again, in a sham trial), and eight more long years before his name was finally cleared.

The “Dreyfus Affair” split France. By the fin de siecle period of the late 1890s, France was split into two bitterly opposing camps: the “Dreyfusards” who wanted the army to open a new trial and possibly exonerate Dreyfus, and the “Anti-Dreyfusards” who vociferously asserted Dreyfus’ guilt, often using harsh anti-Jewish imagery. In several cities, anti-Jewish mobs used the Dreyfus affair as justification for attacking Jews and property owned by Jews.

A January 18, 1898 New York Times article gives a sense of the scale of the violence. “A free anti-Dreyfus and antisemite meeting tonight at the Tivoli Vauxhall produced extraordinary scenes…. At 9 o’clock, on the opening of the meeting, the hall was a seething sea of humanity, crowding every part, gesticulating, shouting ‘A bas Zola!’ ‘Vive l’armee!’ and ‘Vive la revolution sociale!’ The members of the antisemite Committee displayed banners bearing the inscription, ‘Death to the Jews’....

Hundreds of people then left the hall and marched through the streets of Paris, shouting Anti-Dreyfusard slogans and "Death to Jews". Windows of Jewish shops and synagogues were smashed and broken.

The violence playing out on the streets was bitterly fought in the press and the salons of France. Some of the most vocal Dreyfusards and Anti-Dreyfusards read like a Who’s Who of Paris’ Belle Epoch. The painter Edgar Degas was an outspoken Anti-Dreyfusard. When one of his models once told the painter she thought Dreyfus was innocent, Degas screamed at her “You are Jewish!” and ordered her to leave. Other artists, including Claude Monet and Mary Cassatt, were ardent Dreyfusards.

The most famous Dreyfusard was the French writer Emile Zola, who wrote an open letter to the President of the French Republic, accusing the army of framing Dreyfus and then of covering up their lies. He named specific officers he accused of lying and leveled a charge of antisemitism at the French Government. The letter began J’accuse, “I accuse,” and sparked even more criticism and interest in Dreyfus’ case. 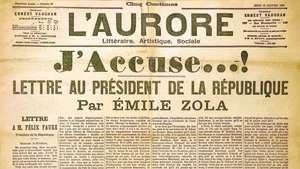 In the aftermath of his letter being published, Zola was convicted of libel and fled to England for nearly a year. Facing intense anti-Jewish and anti-Dreyfus sentiment, Zola refused to backdown. The new Dreyfus Museum in France is located adjacent to Emile Zola’s house.

One of the journalists covering Dreyfus’ trial was an Austrian named Theodore Herzl who worked for a Viennese newspaper called the Neue Freie Presse. He’d recently become the paper’s Paris correspondent, and he attended Dreyfus’ trial. What he saw shocked him. 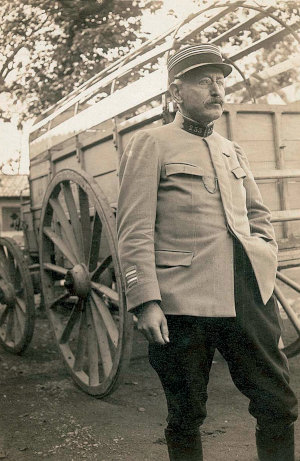 Herzl was an assimilated Jew who believed that Jewish assimilation was the key to ending years of antisemitism. Yet sitting in the courtroom, hearing chants of “A la mort les juifs” - Death to the Jews – created a turning point in Herzl's life. He began attending synagogue services, and began planning a novel which would envision the return of Jews to their homeland.

He published his novel Der Judenstaat, “The Jewish State”, in 1896 and became a tireless advocate for the establishment of a national Jewish home. In 1897, Herzl convened the First Zionist Congress in Basel, Switzerland, where he and other Jewish leaders called for the establishment of a Jewish country in the ancient Land of Israel. Elected president of the newly-founded Zionist Organization, Herzl founded a weekly Zionist newspaper and began seeking a charter for Jewish settlement in Israel.

In time, the incontrovertible evidence that the spy in French military ranks was Esterhazy, not Dreyfus, became impossible to ignore. In 1899, Dreyfus was brought back to France and court-martialed for a second time. The court found him guilty, but reduced his sentence. Embarrassed by this obviously unfair decision, French President Emile Loubet granted Dreyfus a pardon. He was only fully exonerated many years later, in 1906. Reinstated in the army at the rank of Major, Dreyfus went on to serve in World War I. He died in 1935 at the age of 76.

Even though the Dreyfus Affair was one of the most famous miscarriages of justice in French history, Dreyfus’ innocence has been questioned again. During World War II, the pro-Nazi Vichy regime that governed parts of France openly celebrated the anti-Dreyfusards of a generation before, renaming some streets after prominent Dreyfusards and changing names of streets named after Anti-Dreyfusards.

Dreyfus’ innocence has been questioned even in recent months. In October 2021, the BBC announced a new Saturday night drama, Paris Police 1900. The series begins just before Dreyfus’ second trial: in promotional material for the show, the BBC described Dreyfus as the “notorious Jewish spy”. No mention was made of his obvious innocence. 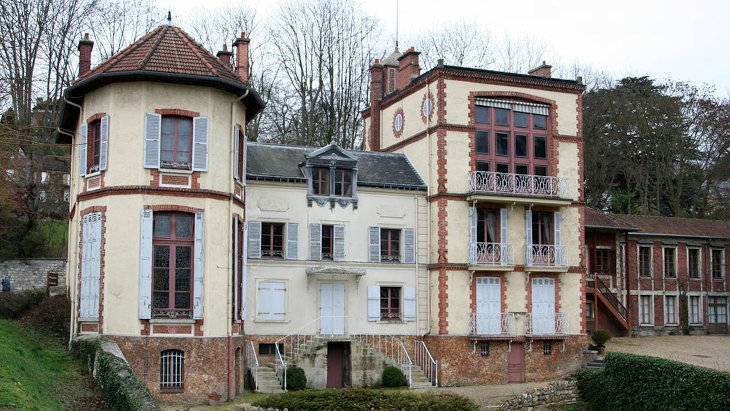 The Dreyfus Museum in Paris, France

In France, far-right Jewish journalist and presidential hopeful Eric Zemmour has falsely claimed that the Dreyfus Affair is “murky” and that Dreyfus’ innocence is “not obvious”.

The new Dreyfus museum, called Maison Dreyfus, is believed to be the first museum in the world devoted to Alfred Dreyfus and his trial. Museum Director Lois Gautier has said he hopes the site “will show and tell about the affair but also pose questions on vital issues of tolerance, othering, human rights, women’s rights, the separation of church and state and the contract between the republic and its citizens.”

Kosher Wine: The Rise and Fall of Manischewitz

The Most Famous Jewish Woman in Medieval England