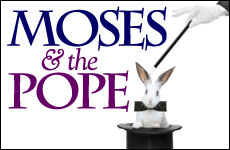 Roman Catholic rituals aren’t usually even a small part of my family’s Shabbat table discussions but a recent Sabbath meal was an exception, granted in the spirit of revisiting an ever-timely Jewish concept.

The late Pope John Paul II was recently beatified by his church. Beatification is a stage in the process by which the Church renders a person a “saint.” For a candidate to attain that stage, a miracle performed by the candidate has to be documented and accepted by a special Vatican committee.

Many, it seems, are the miracles out there. John Paul himself beatified more than 1300 people and canonized 482 saints during his tenure; and the current pope has beatified 790 and canonized 34. (Of course, every breath we take and move we make are miracles, but that’s not what the Church has in mind here.)

To advance the cause of John Paul’s canonization, evidence was proffered that a French nun had been miraculously cured from Parkinson’s disease after praying to the pontiff shortly after his death in 2005. (Yes, Catholics pray to dead people, as intermediaries; for a Jew, that would constitute a most grave halachic offense.) The testimony was notarized and the miracle certified, despite grumblings from some corners. (“Did the prayers for this nun exclude the invocation of any and all [other] recognized saints?” one conservative Catholic publication asked with suspicion.)

Miracles alone don't prove anything at all.

Supernatural interventions have played a great role in Jewish history, of course. But — although many Jews are not aware of the fact — Maimonides clearly states that they do not, and cannot, prove anything at all.

He points out (Foundations of Torah 8:1) that there is simply no true way to distinguish a Divinely-sanctioned miracle from trickery or sorcery. A wonder may be wondrous, but it might also be an illusion. And so, any belief founded on a supernatural sign is, in the end, inherently flawed.

(The requirement that a prophet establish himself or herself by, among other things, performing a miracle or making a miraculous prediction, Maimonides explains, is a purely technical requirement, and does not imply that inherent meaning lies in miracles. [ibid, 7:7])

The wonders recounted in the Torah — even the parting of the Red Sea we revisit on the Seder nights — are not, Maimonides explains, demonstrations of God’s existence but rather expressions of His love for His people.

The sea split, he continues, so that the Jews leaving Egypt could escape from the pursuing Egyptians, not to prove God’s existence. The manna fell from heaven, not as a theological statement, but so that the people would not starve. Even seemingly demonstrative miracles like the ten plagues are interpreted by the Talmud and Midrash as messages, not mere manifestations.

The distinction may seem subtle, but it’s not. We know God not because of any miracle but rather because He communicated directly with our ancestors at Mount Sinai, a carefully preserved historical fact we will soon celebrate on Shavuot. That was no mere miracle, but an actual interaction, a mass meeting of the human and Divine the only such interaction in human history.

That, explains Maimonides, is why, when God tells Moses to lead the Jewish people from Egypt, He adds: “And this is your sign that I have sent you: When you take the people out of Egypt, you will serve [Me] on this mountain,” referring to Mount Sinai.

That mass revelation 50 days after the exodus from Egypt is what established, beyond all doubt and suspicion, that the miracles the people had witnessed had not been trickery or sorcery but expressions of the love and concern of the Creator, Who was now introducing Himself directly to their minds and souls, and gifting them with the Torah.

It is, admittedly, strange that a Catholic rite brought me to reflect anew on the difference between a religion that “proves” things by “miracles”— indeed is based on them — and the incontrovertible truth to which we Jews are heir. But the difference is well worth pondering as we continue our “count-up” to this year’s commemoration of the day we met the Creator.

The Liberating Experience of Judgment

Batman vs. the Joker: Hope vs. Destruction
It Takes A Lot Of Faith To Be An Atheist
How Instagram Brought Back This Nostalgic Soup
What Makes Eli Run?
Comments
MOST POPULAR IN Spirituality
Our privacy policy