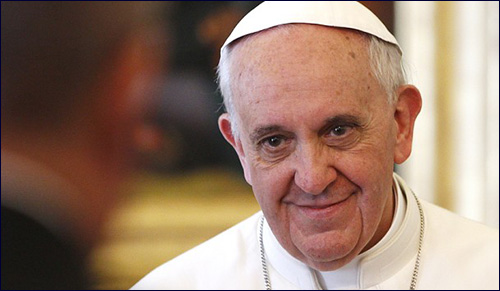 Only three popes out of 266 have been brave enough to make significant changes in the Church’s relationship with the Jews.

From the perspective of the Jewish people, Pope Francis is a rare pope indeed. Since the Church of Saint Peter was established almost 2,000 years ago, there have only four popes out of 266 who have been brave enough to make significant changes in the relationship between the world’s oldest faith and one of its largest.

It would be a huge understatement to say that historically Catholic- Jewish relations haven’t been very good. It would probably be more accurate to say that the Church is directly or indirectly responsible for much of the horrendous anti-Semitism suffered by European Jewry during the past 2,000 years.

The roots of this tremendous animus go back to the very beginnings of the Church, and even earlier. For 2,000 years, from the time of Abraham until the birth of Christianity, Judaism existed as the world’s only monotheistic faith. The Jewish people’s unique beliefs and lifestyle set them apart from the pagan world and the great classical civilizations of Greece and Rome. The differences led to open hostility toward the Jews, and the Greek and Roman Empires, which both occupied ancient Israel, attempted at various times to eradicate Judaism.

Early Christianity began as a splinter sect of mainstream Judaism, most probably sometime in the early 1st century CE. During the second century, it continued to evolve and diverge from Judaism, eventually separating completely into a faith that attracted a large number of pagan converts. Despite numerous attempts by the Roman Empire to eradicate nascent Christianity, in the 4th century CE the Roman emperor Constantine made it the official religion of the Empire.

This marked a great leap forward for the spread of monotheism, yet the traditional Roman animus toward Judaism took on a new theological undertone.

Toward the end of the Great Revolt against the Roman Empire (67-70 CE), the Roman legions burned the Temple in Jerusalem and leveled the city. Centuries later, the young Roman Catholic Church put a theological spin on the destruction. The destruction of Jerusalem and the Temple, together with the exile of the Jewish people from the land of Israel, was far more than mere Roman punishment for rebellion.

From the perspective of the Church, the Jews had rejected Jesus as the messiah and were instrumental in his death. As punishment for their sins, God rejected the Jews, destroyed their Temple and caused them to wander the earth until the second coming of Jesus. It was divine retribution, the wrath of God.

These unpardonable sins were at the root of the tremendous hostility and suspicion towards Jews embedded in the collective consciousness of the church and actively spread by the early church fathers to the masses of Christendom.

Church-driven anti-Semitism led to open violence against Jews, especially at the time of the first Crusade, and the constant persecution, punitive taxation, humiliation, ghettoization, expulsions and mass murder.

While the Holocaust and Hitler’s attack against the Jews was not specifically theological, there is no doubt that he would not have been able to do to European Jewry what he did without building on 2,000 years of Christian anti-Semitism. At the same time, the role of the wartime Pope Pius XII, and his apparent failure to confront the horrors of Nazism, remains a dark stain on the history of the Church.

Out of the ashes of Auschwitz, the State of Israel emerged, however it took decades for the church to take major steps toward re-evaluating its attitude to Judaism and the Jewish people.

Forgiveness: Finally in 1963 the first bold move came during the early tenure of Pope John XXIII when he eliminated the description of Jews as "perfidious" in the Good Friday liturgy. He also made a confession for the Church of the sin of anti-Semitism through the centuries. In addition Pope John convened Vatican II, an ecumenical council, which was closed by his successor, Pope Paul VI in 1965. Vatican II makes three very significant statements about the Jewish people: Only a few Jews were involved in the plot to kill Jesus, no Jew alive today can be held responsible for Jesus’s death, and the Jews are not rejected by God.

After two thousand years the church was finally able to forgive the Jews for something they never did in the first place.

The notion that the Jewish people’ covenant with God remains intact is truly a radical break with classic Catholic theology.

Acceptance: The next significant step came from Pope John Paul II in 2000. He established diplomatic relations with Israel, visited the country and even prayed at the Western Wall. If God had allowed the Jewish people to return to Israel and re-unified Jerusalem maybe He hadn’t rejected them after all. This represented a huge shift in the church’s attitude toward Judaism.

Reconciliation and legitimization: Pope Francis is proving to be quite a maverick. He eschews much of the formality and pomp of his office while working hard to rejuvenate the church and reconcile the church not only with modernity but also with other faiths.

Based on his past statements it could be argued that he will bring about the greatest shift in the church’s attitude toward Judaism in 2,000 years. “We hold the Jewish people in special regard because their covenant with God was never revoked… With them we believe in one God who acts in history and with them we accept his revealed word.” Pope Francis, Evangelli Gaudium 2013

The notion that the Jewish people’ covenant with God remains intact is truly a radical break with classic Catholic theology.

This new perspective will hopefully lead to a significant re-evaluation and improvement of the relationship between the Catholicism and Judaism, Catholics and Jews and the Vatican and the State of Israel.

The Man at the Wall

A Soviet Simchat Torah
G-d Time
Shavuot is The Holiday of Cheesecake and Blintzes
What Does Kosher Mean Literally?
Comments
MOST POPULAR IN Jewish Society
Our privacy policy