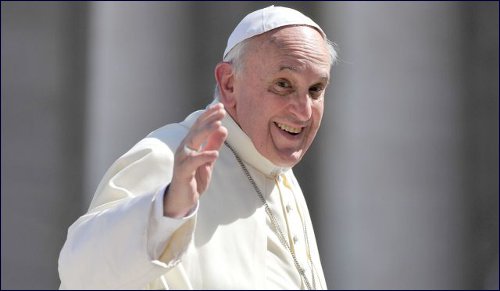 Two events simultaneously share the headlines of newspapers around the globe. Pope Francis follows in the footsteps of his two predecessors and comes on a pilgrimage to the holy land of Israel. At the very same time the world looks on with horror as the Boko Haram terrorists in Nigeria brazenly thwart all efforts to free the 276 schoolgirls they cruelly kidnapped and threaten to sell into slavery.

And what is the connection between these seemingly wholly unrelated events?

To my mind they make clear the most important message the head of the Catholic Church needs to come away with from his visit to the Jewish state that continues to be threatened by those who seek its total destruction: To a large extent, both Christians and Jews face a common enemy.

In a fascinating rationalization of his criminal deed, Boko Haram’s leader, Abubakar Shekau, in a recently revealed video sought to justify his actions by claiming that he had in fact “liberated the Christian girls by converting them to Islam.”

According to Pew, Christians today are the world’s most oppressed religious group.

What is often forgotten by many is that Jews are not the only ones victimized by Islamic fanaticism. Anti-Semitism’s repugnant partner is the vicious anti-Christian mindset that prevails in almost all Muslim countries – a hatred so pronounced that a newly released Pew report makes the striking observation that “Christians today are the world’s most oppressed religious group”.

And where is this persecution primarily occurring? Mainly throughout the Islamic world. In the category on “Countries with Very High Government Restrictions on Religion,” Pew lists 24 countries – 20 of which are Islamic and precisely where the overwhelming majority of “the world’s” Christians are actually being persecuted.

Last week, the Los Angeles Times featured the story of the eight-month pregnant wife and mother in Sudan sentenced to death by hanging for refusing to renounce Jesus and embrace Islam. Meriam Yehya Ibrahim, who has a young son and is married to a Christian from South Sudan, violated Islamic sharia law, the court said. The court also ordered Ibrahim to be flogged for having relations with her husband, since her marriage is not recognized by officials. Sudanese authorities refuse to allow Ibrahim’s son to reside with her husband because the husband is Christian.

The article makes clear that tragic as this story is, it is also immensely commonplace in Islamic countries. Why? Because Islamic law does in fact punish the apostate from Islam – including with death – in accordance with the commands of the Muslim prophet Muhammad.

Human rights organization Open Doors published its 2014 World Watch List in January, highlighting and ranking the top 50 nations that persecute Christians. The overwhelming majority of countries making the list – and nine of the top ten worst offenders – are Muslim, and include nations from among America’s allies (Saudi Arabia, Kuwait) and its contenders (Iran); from among economically rich nations (Qatar) and poor nations (Somalia and Yemen); from among “Islamic republic” nations (Afghanistan), “democracies” (Iraq), and “moderate” nations (Malaysia and Indonesia).

Unfortunately, thanks to the mainstream media, few Westerners understand the true scale or nature of the horrors involved. It is a sickening truth that Christians around the world are being murdered, raped, plundered, abducted, forcibly converted to Islam, or otherwise oppressed by Muslims; they live at the mercy of the mob and receive little or no protection from the police or other government institutions.

In his new book Crucified Again: Exposing Islam’s New War on Christians, Raymond Ibrahim, a renowned and widely respected Middle East specialist, documents in shocking and painstaking detail the extent of this largely unpublicized tragedy, a tragedy he refers to as “a global religious genocide”, with an estimate of about 100 million persecuted Christians.

Ibrahim explains the theological basis for Muslim persecution of Christians. He cites the Islamic belief that the hostile verses naming Christians “infidels” occur towards the end of his career, so they override any tolerance for Christians in earlier verses. Ibrahim writes: “The Koran’s final word on the fate of Christians and Jews is found in Koran 9:29 [where] Allah commands believers, [to fight them]…’until they pay with willing submission and feel themselves subdued.’”

In the Arab world there is a well-known ancient proverb: “First we take care of the people of Saturday, then we take care of those of Sunday.” Muslim fanatics today however have decided to take on the infidels of both groups simultaneously – Christians as well as Jews are now identified as just objects of jihad.

Some years ago I had the honor of leading a group of 150 rabbis and cantors to meet with Pope John Paul the second. We came to express our gratitude to him in the aftermath of his visit to Israel when he movingly placed a personal prayer into the Kotel, the Western Wall, begging God to forgive him and Christianity “for the sins committed against the Jewish people throughout the course of history.” When Pope John Paul addressed our group he made it a point to refer to us as his “older brothers.”

It was a phrase that was almost identically echoed by Pope Francis on November 10 of this past year in words of solidarity marking the 75th anniversary of the Kristallnacht attacks on Jews and their property in Nazi Germany when he described the Jewish people as the "big brothers" of his Roman Catholic flock.

Their desire to reach out to our people as older brothers has assumed new and profound contemporary meaning. Christians and Jews need to recognize a shared brotherhood rooted in mutual victimhood: we both face a fanaticism that seeks sole universal dominion as well as forced annihilation of all those of different faith.

When Pope Francis visits Israel he will see Christian holy sites treated with respect and reverence, Christians free to worship in accord with their beliefs, and Christianity afforded the dignity of a religion granted equal rights with all others in a democratic Jewish state.

That is something quite rare in the Middle East.

I can only pray that Pope Francis takes to heart this great difference between his Israeli hosts and those others who are the avowed enemies of both “the Saturday and Sunday people.”

When Children Kill Children
What Makes Eli Run?
The Tyranny of Materialism
Science Enters the Mysterious Inner World of Consciousness
Comments
MOST POPULAR IN Current Issues
Our privacy policy

What Makes Eli Run?
The Tyranny of Materialism
Science Enters the Mysterious Inner World of Consciousness
BBQ Bourbon Cheese Kugel Recipe
Korach 5782: Visit to Lift the Spirit
That Time The Ivy League Found A Way To Limit Jewish Enrollment
Would You Rather Be Right or Happy?
Korach’s Unique Punishment
Who Was Josephus? The Controversial Backstory of the Famed Historian
Should I Break Up, Get Engaged or Keep Dating?
1 2 3 … 2,941 Next »