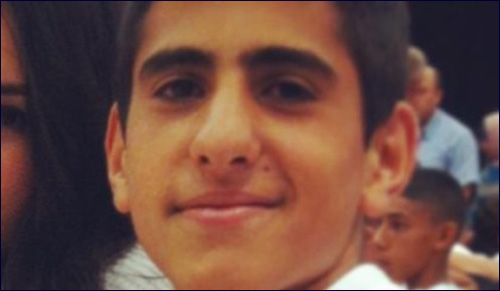 One 17-year-old Muslim teen is risking his life to support Israel.

Looking out a window onto the Syrian border a few miles away, Mohammed Zoabi, a 17-year-old Arab Israeli said that he felt glad to live in Israel, a nation committed to democracy and human rights. “I really believe that I'm a lucky Arab and a lucky human being and a lucky Middle Easterner that I was born in this little tiny piece of land!”

A proud Zionist, Zoabi – like people across Israel – has shared his nation’s pain over the kidnapping of the three teenage boys – Eyal Yifrach, Gilad Shaar and Naftali Frenkel – by Hamas terrorists.

As Israel continues to search for the kidnapped boys, Zoabi decided to do what he could to help, and to show solidarity with the missing boys. At home with his mother in Nazareth, he put together a home-made video and posted it on-line. Standing in what looks like his bedroom, Zoabi gazes at the camera and speaks – in Hebrew, Arabic and English – imploring the kidnappers to release their captives: “On the day before yesterday, these three youths were abducted,” he says, “and tomorrow it could be you or any other Israeli – Arab or Jewish.”

“I am an Israeli and will remain an Israeli. Israel will remain a Jewish and democratic country,” Zoabi promises in a voice raw with emotion. At the end of his appeal, he unfolds an Israeli flag, holds it up to the camera, and intones the Hebrew phrase Am Yisrael Chai, the Nation of Israel Lives. Within days, Zoabi’s heartfelt video had gone viral.

Unfortunately, when an Arab Israeli expresses patriotism he is taking an enormous risk with his life.

Three days after Mohammed Zoabi posted his video, Israeli police arrested three men in his own family, ages 40 to 60, for plotting to cause him harm in retaliation for his video. Zoabi’s mother was also brought in for questioning. Fearful that Zoabi’s foes might shoot at the building, their landlord asked them to move out of their Nazareth apartment. Israel’s Education Ministry issued Zoabi a security detail, and assigned guards to his school, as police continue to work to foil the plot within his own family to hurt him.

His cousin, Hanin Zoab, a Knesset member in the Balad faction who is implacably opposed to Israel’s very existence and is committed to the destruction of the country in whose legislature she serves, said she doesn’t regard the kidnappers of the three Israeli teens as terrorists. She derided Mohammed as a sleazy, mixed-up kid who has identity issues.

Hanin Zoabi statements were so offensive that Israeli police feared she might become a target of violence herself, and placed a security detail around her and her close family members, an act of concern and protection from the country she professes to despise. (Another recent example of Israel’s compassion: In the midst of the search for the missing teens, an Israeli hospital near Tel Aviv operated on Amina Abbas, the wife of Palestinian Authority president Mahmoud Abbas.)

Mohammed Zoabi isn’t the only Arab who incurred the wrath of his community for supporting Israel. The week before the kidnappings, Prof. Mohammed Dajani, a distinguished academic who taught for years at the Arab university Al-Quds in Jerusalem, was forced to resign his post. His “crime” was taking a group of Arab students on an educational trip to Auschwitz to learn about the Holocaust; critics decried his attempts to teach about Jewish suffering, fearing that it might humanize Jews and the Jewish state. The anger directed against Prof. Dajani was so fierce that he needed bodyguards to protect him after the trip.

And a day after police broke up the plot to harm Mohammed Zoabi, another Arab Israeli 17-year-old, Yihye Zakaria Mahmameed, also received death threats when he posted a picture of himself holding a sign saying “Bring back our boys” on Facebook.  Both he and his sister were terrorized for expressing solidarity with their fellow Israeli teens, receiving comments like “you cannot stay alive” and “we want to murder you.” Mahmaameed and his sister are currently staying in their family home, too afraid even to go to school.

In the hours since Israeli police broke up the plot of his family members against him, Mohammed Zoabi has issued a statement saying that he’s received numerous death threats because of his video. He has therefore decided to keep a “low profile” for now.

But his commitment to Israel remains unabated, his solidarity with his fellow Israelis – no matter what their religion – is undimmed. “I will continue to speak up for what is right” he promised. “I’m safe, and will continue to be safe, especially in a great country like Israel. Am Yisrael Chai.”

Operation Good Neighbor: Syrian Thanks Israel for Saving her Life

Understanding the Bat Mitzvah Attack
It Takes A Lot Of Faith To Be An Atheist
How Instagram Brought Back This Nostalgic Soup
What Makes Eli Run?
Comments
MOST POPULAR IN Israel
Our privacy policy