The Lady Is a Mensch 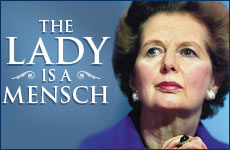 While working as a fundraiser for Aish HaTorah, I often moved among the rich and famous – most of them men – and learned a great deal about the drive for success, nerves of steel and risk-taking. But it was from a lady that I learned what it means to be a mensch -- a caring human being.

Larry King, with whom I had co-authored the book Powerful Prayers, introduced me to Lady Margaret Thatcher, and we invited her to receive the King David Award in recognition of her support for the Jewish people while she was the prime minister of Great Britain.

Why did she care so much for the Jews? In answer to that question, she told me a fascinating story.

During World War II, a Jewish family from Eastern Europe had somehow connected with her parents and requested that they temporarily house their daughter. The Jewish family could not get out, but they were able to arrange a visa and ticket for their only child. At the time, Lady Thatcher's family was very poor and had barely enough for themselves, but they took in this Jewish girl, who ended up staying with them the entire length of the war and sharing Lady Thatcher's room. Lady Thatcher said that her parents taught her that it was essential to help all people in need, but it was especially important to help the Jewish people, who had been so unfairly persecuted throughout history.

This was someone we very much wanted to honor.

CARING FOR THE LITTLE PEOPLE

After a year of back and forth discussions with her staff and attempting to co-ordinate her schedule with ours, she agreed to accept the King David Award at an elegant dinner at the Carlyle Hotel in New York to be held in March of 1997.

During the course of the evening, everyone wanted to have their picture taken with Lady Thatcher. She knew this would happen and she had her assistant call us before the evening to find out color of the wall coverings in the room, so that her outfit would not clash.

She was popular. All one hundred of the participating couples posed for a picture with her, one couple at a time. After they all filed through, you would think she'd had enough -- all the flash bulbs can be very irritating -- but then she requested that we ask the orchestra members if they too wanted their picture taken.

I was impressed. I had never seen such graciousness. I had worked with many celebrities and political leaders and some were quite haughty about the whole picture-taking experience. They limited the number of photos or they wouldn't do posed shots, or they insisted that no flash be used. Others were very accommodating but I have never had anyone suggest additional photos with staff.

After I arranged the photos for the violinist and the harp player, Lady Thatcher suggested that perhaps the chef of the hotel and his staff would also like their picture taken. I was amazed. I was also getting a bit concerned. I wasn't sure just how long this was going to continue. There is a big staff at the Carlyle -- we could be doing this all night. Luckily, it stopped after the chef. I was impressed though. She was a real lady who understood the importance of being good to "the little people."

A few months later, she agreed to come on one of our missions to Israel and I witnessed the same behavior. She was accompanied by three Scotland Yard security personnel. She had an armored van and a chase car that followed the van. Her security detail came to Israel three days prior and cased each venue. They explained that for the first dinner -- at the Rockefeller Museum in Arab-populated East Jerusalem -- that everyone would need to be seated and then she would walk in and proceed straight to her seat and sit down. She would have her back to the wall with guards beside her to stop anyone from approaching her.

Well, I saw why she was known as the "Iron Lady." She had her own plans. She walked into the banquet room, and to the consternation of her Scotland Yard guards, she took the next 20 minutes to circle around each table and shake hands with each and every guest. People were so enthused and felt so touched by her personal warmth, lack of pompousness and genuine human caring.

When she came to our table, she stopped and kneeled down to meet my 5-year-old daughter Bracha eye-to-eye. She shook her little hand and had a short conversation. She asked Bracha her name and her age, and looked as if she was genuinely enjoying herself.

A dinner at the Knesset concluded the trip, and there were many important guests and speakers. Prime Minister Bibi Netanyahu spoke, Mayor of Jerusalem Ehud Olmert spoke, Senator Joe Biden spoke, New Jersey Governor Christine Whitman spoke. Of course, each speaker was introduced, with their many accomplishments listed. During this time, the dinner participants had been served the salad course only. When it came Lady Thatcher's turn to speak, she got up and said only a few words, announcing that she had just ripped up her prepared speech "to ribbons." Then she declared, "I have never lost an election and this is because I can read a crowd. This crowd is hungry. As a woman and mother, I say ‘Serve dinner!'"

As she sat down to tremendous applause, I was reminded of the quality that God values above all in a great leader. Both Moses and David were shepherds who were chosen to lead the Jewish people because they showed compassion for small defenseless lambs. It was when each had demonstrated this trait that God said "You who tend little sheep with such mercy will be a compassionate leader for My people."

Lady Thatcher brought home this important lesson about what makes people truly great: It is their sensitivity to the people they don't have to care about or be nice to. That's when you see their true character.

My Bowl of Forgiveness

The Garden of Forking Paths: Ethics of the Fathers 2:1

Where is My Mind?

The Roots of Wisdom: Ethics of the Fathers, 3:22
It Takes A Lot Of Faith To Be An Atheist
How Instagram Brought Back This Nostalgic Soup
What Makes Eli Run?
Comments
MOST POPULAR IN Spirituality
Our privacy policy