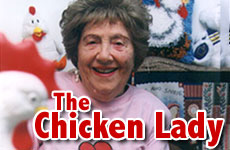 If I had met Chaya Hammer on the bus or in the supermarket I probably would have smiled at her (hard to resist her shining eyes), but then passed her by. Little would I have known of the miracles that this 93-year-old great-great-grandmother is capable of performing.

If I had not met Chaya, I may have assumed that all people in their 90s are in nursing homes or dependent on their children out of necessity. Little would I have known how many lives this woman enhances (saves, really), or the kindness this survivor of the Russian pogroms bestows.

She is affectionately known as the "Chicken Lady," and I have fallen in love with her and her good deeds.

The Chicken Lady began her kindness campaign 22 years ago during a routine trip to Hacker's, a kosher butcher shop in Jerusalem.

"I was standing in line and I saw Mr. Hacker give a young girl a huge plastic bag," Chaya explains. "I saw from the distance that it was nothing but fat and skin. The girl said ‘thank you' and left.

"Mr. Hacker, how many cats and dogs does that family have that it needs so many scraps?"

"I waited my turn. When I got to the front of the line, I said, ‘Mr. Hacker, how many cats and dogs does that family have that it needs so many scraps?'"

The words went straight to Chaya's heart. She looked across the counter and said: "From now on, give the family chopped meat and a whole chicken -- and I will pay for it!"

Chaya started by helping that one family. And that soon became two families. Today, 136 Jerusalem-based families come to Hacker's for their Shabbat meat, running up a weekly bill of over $1,000. Most of these families do not know their anonymous benefactor.

The kindness, however, does not stop with those close enough to get to Hacker's. Before Rosh Chodesh (the beginning of the Jewish month) Chaya's 17-year-old great-granddaughter comes over to prepare greeting cards, envelopes and checks amounting to about $6,000 to send to 64 families throughout the country.

"I don't like people to feel belittled because they need charity."

When the checks are written they are placed in envelopes with a cheery chodesh tov ("good month") greeting card and a decorated stamp, usually the newest Israeli creation. The envelopes are addressed with computer-printed labels and then sent with a smile and love.

Chaya says the idea of the greeting card is to ensure people feel good about the money they receive. "I don't like people to feel belittled because they need charity."

Where does Chaya find her "clients"?

Through the grapevine and by reading the newspaper. Many of Chaya's recipients have truly tragic stories. She sends money to the 15 children of "Shlomo," who was walking down the stairs from his third floor apartment to deliver mishloach manot (gifts of food) to a neighbor for Purim. He slipped, broke his neck and died. "I have them," she says.

In 2000, when Palestinian terrorists murdered a husband and wife, leaving eight young children, Chaya assumed responsibility for them.

Neighborly kindness is not something Chaya grew up with. Born in Vinograd, a small town in the Ukraine, Chaya says her classmates teased her for using a Hebrew name. She and her family survived three pogroms before running away to Romania. The Romanian border police refused her family entrance and they were jailed for five months. When release finally came, the family headed straight for Palestine.

"My father was very Zionistic… How I love this country! How I love it!" Chaya says.

However, Chaya's mother had tuberculosis, so the family was forced to relocate to America. Two-and-a-half years later, Chaya's mother died a young woman of 34. The family remained in America, until 1969 when Chaya and her now deceased husband, Ephraim, made aliyah to Israel.

With everything this devoted bubbie (Yiddish for grandmother) gives to her umpteen offspring, one would think Chaya should have little time for her "chicken business," but she is very organized and dedicated.

Chaya doesn't think she is doing something unusual. "It is just the Jewish way," she says.

A trip to Chaya's modest three-bedroom apartment reveals her intricate system. I sit on a chair cushion designed with images of little white chicken heads, facing a mantle of chicken stuffed animals, figurines and mugs (all gifts). However, most importantly, I sit in front of a desk -- strewn with envelopes, cheery stamps and cards -- and next to a chair piled high with 10 large, stacked filing boxes. When a donor sends money for the Chicken Lady's endeavors, the name, date and amount is recorded in an account book.

"People trust me. They know if they give me $1,000, it goes directly into the charity fund."

She flips through a book to show me; 54 pages have been filled since July 2002. Once the donation is recorded, she writes a personal thank you note to the benefactor. Then, the donor's name is placed on a card and filed alphabetically in one of the 10 boxes on the chair.

Chaya raises her chicken money by word of mouth. While most donations come from the United States, she has supporters in Europe and the Far East. "Thank God, I have a good name and people trust me," she says. "They know if they give me $1,000, it goes directly into the charity fund."

Unbelievable. One 93-year-old woman (who could easily pass for 60) is feeding hundreds of needy people with no more than the knowledge that this is the Jewish way. "When I know that children are hungry," she says, "I want to give them all I have."

Mayaan Jaffe made aliyah from Leawood, Kan. three years ago. She is an Israel Hasbara Committee feature reporter and researcher and a latest news reporter for Arutz Sheva. Jaffe writes articles and press releases for publications across the country and abroad from her caravan in Gush Etzion.

Purim & the Secret of Sunsets
What Makes Eli Run?
The Tyranny of Materialism
Science Enters the Mysterious Inner World of Consciousness
Comments
MOST POPULAR IN Israel
Our privacy policy