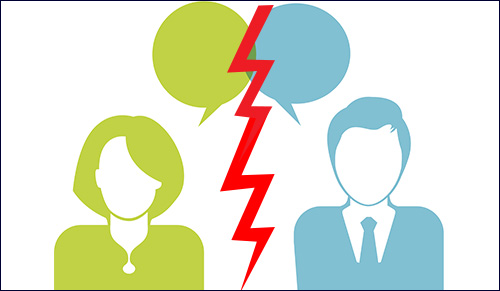 Men and women think we speak the same language. We don’t.

V-Day has come and gone. As a Jew I didn’t “celebrate” it. This “holiday” has been forced down our throats like a feeding tube. It starts at age five when in public school the kindergarten teacher tells the kids to bring in cards and you’re always the one who gets only two: one from the class nerd, the other from the teacher.

“One block away” to a man really means one block on Pluto which is actually equivalent to seven earth miles.

Aside from the emotional scarring, February 14th, did make me think of men and woman. After having been married for over 30 years, with a son and a brother, you learn a little something about the sexes.

Not only are our hormones different, we’re wired differently for sound. We think we speak same language. We don’t.

I first noticed it while writing “soap opera” guys on As the World Turns. Think Ken dolls. On an anniversary, they actually made a plan, went to a store, wrapped something. A “soap” doctor would walk out during heart surgery if his wife texted him: “We need to talk.” Not only did they have a meaningful conversation, they noticed if their wives had a cavity filled. “Oh darling … thank heavens they could save your third molar!”

Then I looked at my husband and realized, I could walk into the room in a full body cast and he might say: ”You changed?”

Soap husbands and wives were always meeting for lunch. When was the last time you met your husband for “lunch” on a Tuesday? Ah yes. When they were pouring me into the body cast. My husband ate my Jell-O. All of which explains why most soap writers are female.

I love the differences between the sexes, as perplexing as they may be. But I’d much prefer “You changed?” to a so-called “metrosexual” male who get all ferklempt over a new Swiffer.

So, for you mamalas, I wrote a few of these differences down. True it may not be PC, but chances are at least all will be offended equally.

FIXING THINGS:
FEMALE: “Oy Irving. Enough already with your head under the boiler. Call someone who might not blow us up.”
MALE: “Esther, please. I know what I’m doing! Why should I spend $100 on a service call when all I have to do is light a match?” (Oy.)
ANALYSIS: Females know things break. It’s one of the universe’s natural laws. It’s not my fault or your fault, but a 30 year old boiler that hasn’t been serviced since the Clinton era will eventually spit out evil stuff. Males on the other hand, not only think they’re Bob Vila, but take things breaking down as a personal act of terrorism. Many have resorted to hitting, banging, and clopping the item so it will apologize, admit it was thoughtless, and start working again, despite the fact that everything they try to fix explodes and shuts down traffic lights in three counties.

LONG DISTANCES:
FEMALE:
“Irving! We’re in a monsoon here. Let’s get a taxi already?”
MALE: “A taxi?! Esther are you meshuggah? The theater’s only a block away!
ANALYSIS: Right. On Pluto. It’s a Pluto block which on Earth equals seven miles. If you ask a male how far it is from Brooklyn to Miami? A block and a half, tops. This of course is why the male has trouble with directions. If he divides what the GPS tells him into seven and drives through alleys, he thinks he can turn a 60 mile trip into eight. Of course it will take three hours as he’s in the wrong state.

FEMALE: “Here Irving darling. I knew you wanted that Yiddish app made in Israel. So a month ago I ordered it. Happy Anniversary!”
MALE: “Esther, I know you like Jean Nate so I bought you a vat, like last year.”
ANALYSIS: This strange inability to shop comes from their hunter days when the only thing the male shopped for were bows, arrows, and bison. Higher order shopping is very complicated. It requires paying attention and noticing, which many can’t do. I found it’s best to send a man to stores followed by “‘R Us” or “City” as in “Gems ‘R Us” or “Cashmere City.” This way, even if they don’t know what they came for they can’t make a mistake. TIP FOR FEMALES: Don’t get overly enthused if he gets you dusting powder or from that day forward, you’ll get enough Jean Nate to blanket the Dead Sea.

MAIL/E-MAIL:
FEMALE: “Irving, we got a nice card from Tante Bessie in Boca. Her hip replacement went very well.
MALE: “Nice. So did we get anything from the Publishers Clearing House yet?!”
ANALYSIS: For the average male, mail takes on a mystical significance – real, in cyberspace or someone else’s. Many have a relationship with the mailperson that come in second to their honeymoon. If heaven forbid they don’t get something, my neighbor, Blanche’s husband would phone the Post Master General and geshrai. Mine swooned over things for “Occupant.” He loved waiting for AL, our postman to bring in 10 catalogs on things like “The Life of the Blowfish” and a million dollars from the 4000 sweepstakes he entered. He actually waited for the Prize Patrol to pull up, even when I explained he had a better chance of being struck by lightning in the Gobi. We didn’t come up exactly empty. We got a $2 cubic zirconia, for which he paid 500 for an aluminum setting, an invite to tour a vacation home in Bosnia, and maroon luggage made of saran wrap.

Now, this is all not to say we women don’t have our quirks, our little obsessions, our tiny hormonal moments, but in fairness, we don’t usually get a thrill seeing four bottles of empty ketchup upside down in the fridge. Far more logical to take a few or 20 from a fast-food place and tie them neatly in a baggie with the 200 Kikkoman soy sauces.

Jewish Vs. Goyish
Saadiah Gaon, Rashi and Maimonides: How Three Rabbis Revolutionized Judaism
King Sennacherib and the Siege of Lachish
Three Small and Easy Changes to Add Positivity in Your Home
Comments
MOST POPULAR IN Jewlarious
Our privacy policy
Aish.com Is Looking for Great Writers