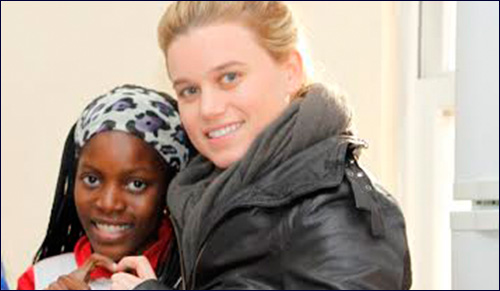 Lauren Winkler lived her life driven to explore and discover new places, new people and new opportunities. She believed that life was too short and the world too fascinating to live any other way. In her 28 years, Lauren traveled to 27 countries, sharing her infectious smile and radiant energy with everyone she met.

Tragically, Lauren's journeys ended on September 29, 2013, when the small private airplane in which she was a passenger crashed.

“I with driving home with my family, and I heard on the radio about the crash,” explained her father, Gary Winkler. I immediately suspected that Lauren was on that plane, so I turned the car around and headed to Santa Monica. People survive plane crashes, and I figured she'd be laid up in traction for a few months with a broken back.”

But they found out the plane had slammed into a hangar and exploded upon impact, killing all four people aboard. In the words of investigators, the crash was "unsurvivable."

The happy factor for Lauren was firing on all eight cylinders.

At the time of the accident, Lauren had reached the happiest point of her adult life, according to her father. "The happy factor for Lauren was firing on all eight cylinders. She had made the hard decision to leave Israel after living there for three years, and had returned to Southern California to be closer to family. Lauren had also just gotten a dream job in television production, found an apartment she loved in Venice, and was in a meaningful relationship."

Lauren’s last text message, to her brother Josh, said how much she was looking forward to meeting his newborn daughter, Millie, since Josh and his young family were about to move back to California. Another brother, Adam, had also returned to the area with his wife and their two daughters, ages 2 and 4. After years away from family, Lauren was eager to be an active and loving aunt to her three little nieces.

Lauren never did anything by half-measures. She didn't just decide to live in Israel; she also helped staff two Birthright trips, helped others make aliyah, and even partook in a three-month stint in the IDF.

In Israel, Lauren worked as the youth leadership director for Save a Child’s Heart, an organization that raises money to provide urgent free pediatric heart surgery and follow up care for children from Third World and developing countries at the Wolfson Medical Center outside of Tel Aviv. Nothing fazed Lauren about her fundraising duties. She shouldered into restaurants on Tel Aviv's Dizengoff Street, succeeding in getting proprietors to donate to the cause. A far more daunting challenge was climbing Mt. Kilimanjaro to raise $10,000 to pay for a life-saving operation.

Lauren's parents and three brothers always knew her as a young woman unafraid to challenge herself and others, but they are still learning about her impact through dozens of notes and emails flooding in from those whose lives she touched.

"Giving people courage from her own self-reliance was one of Lauren's strengths," Gary said. “So many people have told me how their lives were changed by her in different ways.” One woman from the Philippines who studied yoga with Lauren wrote that Lauren gave her the courage to travel back to Southeast Asia, a goal she had held for a long time but had been afraid to implement. “Another was profoundly affected by Lauren’s positive happy energy,” says Gary. “Her teacher was immediately impressed by Lauren’s dedication and commitment to learn. Several people simply said they loved her.” 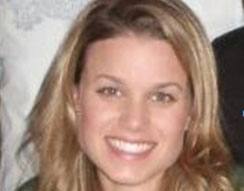 Sara Mucznik, marketing manager of Save a Child's Heart, recalls Lauren as an uplifting and positive presence. "She offered guidance to many of the volunteers coming from overseas, and connected with many of the children and moms. I especially remember the relationship she had with Gabriel, a 15-year-old boy from Angola. He was here for heart surgery and became absolutely infatuated with Lauren because of her beauty and energy. He came into the office every day, asking where Lauren was and bringing little gifts that he made for her. Lauren filled the role of a big sister and offered him a lot of support during his recovery."

Lauren had a gift for communicating with the children and moms, using gestures and expressions along with bits of shared language. "She would always find a way for them to understand her."

Gary recalls the anxiety he and his wife, Carole, shared when Lauren announced new travel plans to far-flung countries. When they voiced concerns about her safety, Lauren whipped out a spiral notebook where she had fastidiously organized her trip. Each country was color-coded and listed the sites she planned to visit with her travel companions. Her travels included England, Holland, France, Greece, Bali, Panama, Costa Rica, Jamaica, Bolivia, Thailand, Cambodia, Laos, and Vietnam. The last country she visited was India. Afterward, she told her dad, "I'm done with countries that have more than 1.2 billion people."

Lauren defined herself as a modern and hopeful Zionist, according to her brother Josh. "She felt at home in Israel, closer to what she felt was herself, and she developed an incredible network of friends." The Jewish mission called throughout her lifetime. After high school she went on Birthright, and after her first semester at Arizona State, she asked her parents if she could go to university in Israel instead. "No matter what objections we might have raised, from the cost to whether she could be accepted, Lauren had already figured out the answers," Gary recalls.

Asked why she loved being in Israel, Lauren's answer was simple: "Because everybody's Jewish here.”

Growing up, Gary's family attended an orthodox synagogue, since his father had been raised orthodox, but attendance faded over the years. After his bar mitzvah, Gary didn't attend shul for many years, until he and Carole had young kids of their own and began thinking about Jewish education. "We picked a Conservative shul in Anaheim (Orange County), and before we knew it the kids were coming home talking about being kosher and keeping Shabbat," Gary recalls. Taking their cue from their children, the Winklers made their home kosher, and eventually Gary started manufacturing kosher products in the ice cream and sorbet business he has run for nearly 40 years. Many years ago, a friend introduced Gary to Rabbi Shraga Simmons of Aish HaTorah, and studied together on a weekly basis. "Aish has played an important role in our journey, and we have very special and powerful memories with many people from Aish," Gary added. About ten years ago, he went on a trip to Israel. "When we drove by a sign that said 'Tefillin factory,' on the spot I went in and bought my first pair. I was so excited I knocked on Rabbi Motty Berger's door early in the morning because I wanted him to help me put them on at the Kotel for the earliest morning prayers.”

In his eulogy, Gary said, "My daughter was an explorer, a free spirit, a loving friend, a very loyal friend, a questioner, a challenger, a mover and definitely a shaker, and most of all, a bright light… She had a childlike intuitiveness, a yearning to learn and grow, a certain level of naiveté and pureness that was so refreshing in our corrupt and polluted world. She had a driving need to help others, to share what she had with others."

You can either fight life's challenges or accept them. Either bend or break.

Gary knows that his family is not unique in facing this kind of suffering. He has received an outpouring of support – the middle-aged Jew from Los Angeles who came to share his own story of having buried 5 children. The fellow congregants who comfort him during Kaddish. And the friend who told of how his father lost his entire family of 8 children, parents and siblings in the Holocaust – then rebuilt a new life in the new world.

A lifelong process of acceptance has only just begun.

“The pain is so profound,” says Gary. “Words of comfort – whether intellectual, spiritual or philosophical – are just vacuous words that do not mend a broken heart. There is no turning back the clock, no magic bullet, no pill to take. But you can either fight life's challenges or accept them. Either bend or break. I am still in shock and for now the wound is fresh and keeps getting reopened – like a scab on your finger that never heals. After time we hope to see things differently.”

The Winklers ask that those who want to honor Lauren's memory can make contributions to Save a Child’s Heart (saveachildheart.org), which has already received more than $15,000 in donations in Lauren's name. "That means lives will be saved and families will be deeply affected by our loss," says Gary. Additionally, a family friend has decided to dedicate a Torah scroll in Lauren's memory.

Says Gary: "You put all your focus in raising your children. They are the center of your universe. My message is to hold and kiss your children harder and more often. Don't take any minute for granted.”

The U.S. Military and Rosh Hashanah

The Battle on Campus

John Lennon, My Father and Me: Imagine and Jewish Universalism
Saadiah Gaon, Rashi and Maimonides: How Three Rabbis Revolutionized Judaism
King Sennacherib and the Siege of Lachish
Three Small and Easy Changes to Add Positivity in Your Home
Comments