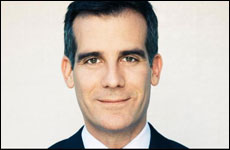 Why his election doesn’t make me burst with pride (yet).

Apparently we (I use the term loosely; I confess to only voting in federal elections) elected Los Angeles’ first Jewish mayor. The media is trumpeting the news. And yet it leaves me cold. It doesn’t mean anything to me.

What’s going on? I’m certainly proud to be part of the Jewish people. I certainly share the joys and pains of our brothers and sisters. I care deeply for the Jews of Israel and across the globe. So shouldn’t I be excited?

I don’t think it’s because I don’t care; I think it’s a reflection of what I do care about – character. Now the new mayor, Eric Garcetti, may be a man of sterling character, someone to respect and admire, a human being who sanctifies God’s name in the world. If so, that would really be something to celebrate. But we don’t know yet; and neither do the reporters who are all bursting with pride.

On the other hand, he may be (although I certainly hope not), like many politicians – self-serving, of weak moral character, and a desecration of the Almighty’s name in the world. In which case, we would all hide our heads in shame.

Someone’s Jewishness alone doesn’t make them praiseworthy. It makes them my brother. It makes their happiness my happiness and their pain my pain. And it means that their actions affect me – for good and for bad.

I know Adam Sandler’s song is meant to be humorous. But it touches a chord. Yes, Jews have achieved prominence in society. Yes, they have received accolades and awards in their professions.

But only one type of accomplishment makes me proud, makes me sit up and pay attention – refinement of character. I know some Jews like that. You probably don’t know their names. They’re not mentioned in any songs, books, online articles or Newsweek’s list of the 50 most influential rabbis. Yet their hearts and hands are open to Jews in need at all times. They can’t sleep if another Jew is lost, is in pain.

Maybe someday I’ll write about those people. But probably not. They wouldn’t want the publicity. They’d be mortified. They do what they do only because they are. They make me proud. They make me better. They make me want to be like them. They are my role models and not a Jewish mayor, actor or athlete.

I hope Mr. Garcetti will turn out to be just like my heroes. Maybe he is already. I don’t know yet. The Jewish pride will have to wait.

Just Breathe: Am I Worthy?

The Golden Rule
Near Death Experience Panel
The Western Wall: The Heart of the World
Ask the Right Question: Tisha B’Av
Comments
MOST POPULAR IN Current Issues
Our privacy policy
Aish.com Is Looking for Great Writers