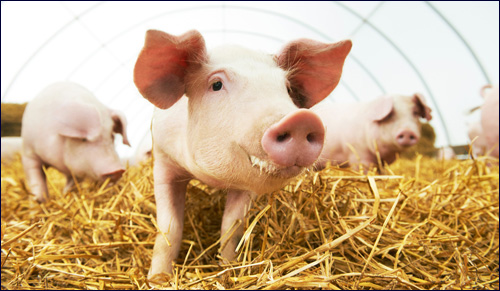 Think about how incredibly insulting it must be to pigs when they see kosher Jews eating "Facon."

Thus, the name alone does not tell you if a particular creature is or is not kosher.

If you want to understand which critters are kosher, you obviously have to start with the Torah. It tells us that kosher land animals are those that have split hooves and chew their cud. "Chewing your cud" means to chew for a second time parts of food regurgitated from the stomach. (Yes, this sounds more like a David Blaine magic trick). Some scholars have pointed out, however, that split hooves and chewing cud have deeper significance. They note that a cow's split hooves symbolize a person's ability to split their selfish desires from their selfless pursuits, whereas chewing cud symbolizes self-examination and reflection. These are important spiritual concepts but a novice may not appreciate the deeper meaning. So, if you're out on a first date, do not mention that, spiritually speaking, you have split hooves and chew your cud. Trust me, it will not be taken the right way and your date, like your spiritual hooves, will split.

The Torah also tells us that certain land animals, no matter what, are not kosher, including the pig. Nowadays, however, there exists a kosher fake bacon product called "Facon" which apparently is a decent facsimile of the real thing. But think about how incredibly insulting it must be to pigs when they see kosher Jews eating "Facon." It's like hearing someone decline your engagement proposal and then watching them get married to your doppelganger. Don't pigs suffer enough humiliation when they hear people exchange insults like "you eat like a pig," "you're as fat as a pig" and "this place is a pigsty"?

The Torah also tells us that sea creatures are kosher if they have fins and scales. According to the rabbis, any fish that has scales also has fins and therefore (barring special circumstances) if a fish has scales, it should be considered kosher. (See, e.g., Talmud, Niddah, 51b) The same type of deductive reasoning, however, does not apply to other aspects of Jewish life. A schlemiel is not necessarily a schlimazel. A rabbi with only a few index cards does not necessarily mean a short Shabbat sermon. A musician with the last name Springsteen is not necessarily Jewish, unless he's singing "Born to Frum," "Hora Dancing in the Dark" or “Bris in the U.S.A.”

Unlike land animals and fish, the Torah does not provide an express litmus test for kosher birds. Instead, it lists non-kosher birds including twenty different species. Based on this list, rabbinic authorities have deduced some telltale signs for identifying kosher birds. Kosher birds include certain species of chicken, duck, geese, turkey and, believe it or not, dove. Of course, I've never seen anyone make dove schnitzel. (I've also never seen anyone make a cholent popsicle, but a man can dream!) Speaking of dove schnitzel, I'm guessing that most doves would gladly dive into a deep-fryer just to escape nerdy magicians and their cheesy dove-up-the-sleeve magic tricks. But if Jews do not want to eat dove, it's no big deal. As they say: no harm, no "fowl."

Non-kosher birds include, among others, pelicans, ostriches and vultures. This is just one reason your mother never treated your illness with vulture noodle soup.

The Torah, however, actually states that certain winged insects are kosher including red, yellow, white and spotted gray locusts. (Darn it! I hear that blue, green and orange polka-dotted locusts are the most delicious.) Notwithstanding, many rabbinic scholars agree that locusts should not be consumed. For obvious reasons, you also should avoid locust-flavored breath mints.

Bottom-line: Some creatures are kosher and some are not and there is way more to keeping kosher than just identifying permitted animals. So, if you are unsure whether a particular animal is kosher, seek rabbinic guidance before consumption, unless you are eating a (certified) animal cracker.

An Interview with the Chief

Did Jew Know?
Adam and Eve Were Vegan
Bechukotai 5782: Divine Retribution
Behar 5782: Working to Live or Living to Work?
Comments
MOST POPULAR IN Funny Stuff
Our privacy policy