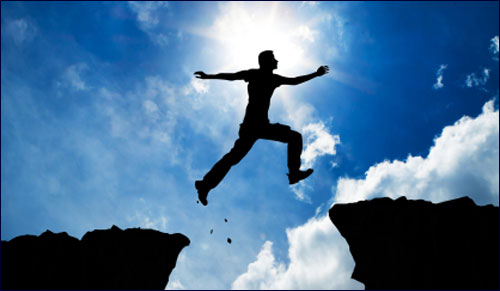 Why I observe Judaism even when I don’t feel like it.

I love writing, but sometimes I just don’t feel like doing it. There are usually a number of valid excuses: Housework, a beautiful day, a compelling book to read. But to grow, sometimes we have to do things even when we don’t feel like it.

This is evident in any artistic field. Practice is necessary just to maintain one's level, and surely to improve. There's a quote attributed to the talented violinist Jascha Heifetz on this topic:

"If I don't practice one day, I know it; two days, the critics know it; three days, the public knows it."

Even on days when an artist feels yucky or unmotivated or uninspired, that doesn't absolve them from going through the motions, just to keep their muscles from atrophying.

This phenomenon is also found in the athletic world (or so I hear), and, more to the point of this post, in the religious world.

When I was first getting into the whole Orthodox Judaism thing, I remember asking a close observant friend about the spiritual ecstasy she must experience every day. After all, weren't we both thinking about lofty concepts such as God's sovereignty over the entire universe, the creative power of speech, and the intrinsic holiness of everything? I was an idealistic 20-something, she, the mother of several small children who had been religious for some years. The conversation went something like this:

Me: "It must be so mind-blowing to start your day off with these blessings where you get to think about how God returned your soul to you and how everything we need is provided for us!!!"

Her: "Well, usually I just end up mumbling through them in a semi-conscious stupor."

The honesty of her statement was, frankly, lost on me until I became a mother of several small children myself, but she touched on a deeper challenge that comes with adhering to the ritualistic aspect of Jewish life.

Judaism is very much a religion of practice, of doing. In the morning, I wake up and thank God for creating me and giving me another day. Then I ritually wash my hands. If I'm really on it, I'll say my morning blessings after that (though sometimes they get said a little later).

I know. I've been there. I AM there in some areas of my practice.

Time to give up? Not so fast.

My rabbi once told me that even when I don't feel like praying, I should still make an effort. Even if I feel completely disconnected from the action that I'm doing. Why? Because there will come a day when I will feel like praying, and if I haven't been keeping my muscles in shape, I won't be able to connect to my Creator through the vehicle of prayer. It will be so foreign to me that it will impede my attempt to connect.

By going through the motions, even in times of spiritual famine, I am keeping the lines of communication clear. I'm weeding my spiritual garden, even though I may not be harvesting any vegetables at the time.

By continuing to practice, I am continually improving, much like a musician who is working on a piece of music.

This doesn’t mean that it’s okay to stay a spiritual zombie. While the reality of my morning blessings may be that I don't have the best concentration while saying them, that doesn't exempt me from trying to improve their quality.

We’re not perfect, and that’s okay. When Jascha Heifetz first picked up a violin, he wasn’t perfect either. It took years of practice and determination to become great.

And that’s something I find encouraging when I’m not feeling particularly “spiritual,” when doing a mitzvah might even feel like one more thing to check off my to-do list. I know that by continuing to practice, I am continually improving, much like a musician who is working on a piece of music.

As a musician, I will sometimes get stuck on a certain musical passage and get into a rut where I make the same mistake in the same place. Every. Time. Is it frustrating? Absolutely! But I’m motivated by my desire to bring a beautiful piece of music into the world, both for my own enjoyment and sense of achievement, and for the enjoyment of those who will hear it.

There are times when I feel like I’m “stuck” on a mitzvah, and it’s also very frustrating. But I keep going because I know that the Torah is the blueprint for life, and the mitzvot are my connection to that lifeline. When I’m doing a mitzvah, even if it’s not at the level that I would like it to be, I’m still bringing some light and positivity into the world, and moving the world that much closer to perfection.

Imagine how beautiful the world would be if we were all as proficient at Judaism as Jascha Heifetz was at violin.

Rivki Silver wants to do all the things. In her creative endeavors, sometimes she feels more like a musician, spending time performing, composing, teaching, and, occasionally, making videos with dancing produce. Sometimes she feels more like a writer, typing pieces which can be found around the internet, and some on her blog, which she named before branding was a thing. Most (all?) of the time she is a wife, mother and community member, living in Cleveland with her husband and four children. Because this is an "about me" blurb, she feels compelled to include that she was a fellow in the 2016 Cleveland Jewish Arts and Culture Lab, and is currently the principal clarinetist in the Cleveland Women's Orchestra.

PODCAST: When Everything is a Crisis

When Every Millisecond Counts

Pandemic: Bringing Out the Best or Worst
Evolution 2.0: The Coming Darwinian Revolution
Chukat 5782: Let’s Play the Blame Game!
The Sin of Moses: The Two Ways to Communicate
Comments
MOST POPULAR IN Spirituality
Our privacy policy