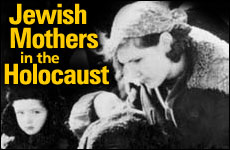 There are no words to describe their valor, only prayers.

It was a time, unimaginable. Unthinkable. A time incomprehensible to any mother. Or to anyone human.

Sitting here, almost 70 years later, I still hear the echoes of these mothers. I see the shadows and feel the horror of madness-let-loose. But I also feel unbridled love and admiration for these women who, shoulder-to-shoulder, bore this monstrous beast with courage, conviction, and faith unparalleled.

So many suffered, but on this Mother's Day, we pay tribute to these special women.

When it came to protecting their children, there can be no greater heroes than these Jewish mothers. And no one better words to describe it, then their own words.

When the Nazis rounded up the Jews of Piotrekow for deportation, Yisrael, age 4, was supposed to accompany his mother, Chaya, to Ravensbruck. This was Himmler's notorious "women's" camp where death by starvation, beating, torture, hanging, shooting and medical experiments were a part of the grotesquerie of daily life. Chaya pushed him away, allowing his older brother, bound for Buchenwald, a "safer" camp, could stash Yisrael in a duffel bag, where she believed he would have a better chance of survival.

She didn't survive. But her son grew up to carry on the 38th generation of rabbis, becoming Chief Rabbi of Israel and one of the most revered Jews in the world: Yisrael Meir Lau.

In the book “Jewish Responses to Nazi Persecution,” by Isaiah Trunk, we see the following testimony from a Jewish mother about to be taken to a concentration camp, dated September 23, 1943:

Bronia... I beg you: take care of my son. Be a mother to him. I am afraid he will catch cold: he is so weak and sickly. He is very intelligent and has a very good heart. I am sure he will love you. Bronia, this letter is a cry from the heart. Michael must eat, become strong, be able to withstand sufferings. Please, it is necessary to dress him in warm clothes, that he wear socks. I cannot go on writing. Even my tears have dried up. May God protect you both. Genya.

Eventually he was captured. Both mother and son died in the camps.

Another from the same book, describing events in 1932

Froh Golde Graucher burst into our home crying. She had gotten a pass to the Land of Israel, but what good was it, since two of her children were grabbed. I could hear my mother crying as they spoke: “Our days are numbered. But save my youngest child! Register him as the child they took from you.”

They fell into each other's arms, sobbing. It was terrible to be the only one going, but my mother tried to make me believe she would follow.

The train started moving. I had to keep forcing myself to call Froh Graucher, “mameh.” I fought back tears, as before my eyes I saw my dear mother. Who knows if I'll ever see [her] again."

During August and September 1942, the Jews of Kowel, Poland were imprisoned in the synagogue, then 18,000 were executed. Knowing their fate, many wrote on the walls in Hebrew, Yiddish, and Polish, using anything, even their fingernails. Here are two:

Reuven Atlas, know that your wife Gina and your son Imush perished here. Our child wept bitterly. He did not want to die. Go to war and avenge the blood of your wife and your only son. We are dying, although we did no wrong.

Forgive me! Mother, I want you to know that they caught me when I went to bring water. If you come here, remember your daughter Yente Sofer, who was murdered on 14.9.1942.

The following was written by Vladimir Shteinberg on November 14, 1944:

My dear sister, today is the anniversary of dear mother's death. She was killed by Nazi criminals on Nov. 14, 1941. On that day, at five o'clock in the morning, they began massacring the Jews in our town. By nightfall, 9,000 people had been killed – men, women, children. My dear mother's image is engraved in my mind. She thought of her children till the bitter end. A family friend, who was taken to the pit with our mother, later escaped and told us that our mother had talked about us all the way. Her last words were, “Thank God, my children are alive. They are not here.”

Rudolf Hoess, the brutal commandant of Auschwitz, noted in his autobiography that "time and time again" he "witnessed mothers with laughing or crying children [who] went to the gas chambers." He recalled a young woman who, as she stood at the gas chamber, said: "I deliberately avoided being chosen for labor because I wanted to take care of my children and go through this in full awareness of what was happening. I hope it won't take long."

In the book Scrolls of Auschwitz, a tragic scene is described. In 1943, children were undressing in the anteroom of a gas chamber. When guards tried to hurry them, one 8-year-old girl resisted, crying: "Go away, you Jewish murderer! Don't put your hand, covered in Jewish blood, on my sweet brother. I am his good mother now and he will die in my arms."

On this Mother's Day – as we celebrate with carnations, brunches, cards, and words of love – may we all light a candle for these women, for whom there are no words to describe their valor, only prayers.

This prayer is based on the words of Alexander Kimel, a Holocaust survivor:

Almighty God, full of love, remember all the Jewish mothers, that carried their babies to their execution, led their children to the gas chambers, or witnessed their burning. Almighty God, let their anguish, pain and torture never be forgotten. In our memory they will live forever and ever.

Searching for Jews Saved by the Angel of Budapest
Faith: the Axis Upon Which the Wheel of Science Turns
Love - Not Just About Chemicals Anymore!
Is There a Moral Code in a Virtual World?
Comments
MOST POPULAR IN Israel
Our privacy policy