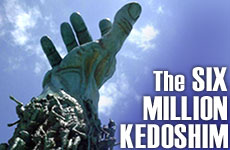 Why we refer to those who perished in the Holocaust as "kedoshim."

No passages written about the Holocaust weigh so heavily on the heart of the religious Jew as those that see "no point, no faith, no Divine inspiration..." in the death of the Six Million. We admire those who preserved their faith under the worst of circumstances. Indeed, we view the individual who is a moser nefesh -- who risks his very life -- to be mekadesh shem shomayim (sanctify God's name) as someone whose concept of life transcends the flesh and blood of a this-world existence.

Thus, we revere the Jews of the Middle Ages -- spiritual giants and simple Jew alike -- who chose the stake over the cross; in their death we catch a glimpse of eternal life. Regardless of the nature of their previous life, their choice at the moment of truth branded each as a kadosh, one who died sanctifying God's Name, and for all time their act is a beacon of inspiration.

In come two soldiers and drag him off to the death camps, while he protests all along that he is a good Catholic. Is he also one of the six million kedoshim?

But what about the Holocaust? What choices were the victims given? What merit could they have earned with death? Why do we call them all kedoshim, when so many of them had been vehemently anti-religious and had helped destroy the foundations of Torah in Europe?

Consider, for example, the most ironic situation imaginable: a young Jew, born of Jewish mother and Catholic father, raised as a Catholic, is kneeling in a church, quietly murmuring his paternoster, perhaps even offering a prayer for the well-being of the brave German soldiers. In come two soldiers and drag him off to the death camps, while he protests all along that he is a good Catholic, and not a Jew. Is he also one of the six million kedoshim?

Without pretending to offer definitive explanations for an inexplicable tragedy, the following essay deals with the use of the term "kedoshim" in regard to those who lost their lives in the Holocaust.

THE MAKINGS OF KIDDUSH HASHEM

God is immutable. He does not ever change in the least -- neither in sanctity nor in its lack -- regardless of any actions initiated by man. On the other hand, man can affect the degree of Divine revelation in our world -- the degree of gilui panim and hester panim -- that which permits man to perceive the Divinity, or veils Him from human perception. This can be understood on a simple level, in terms of psychological impact: if a person commits a sin brazenly and with impunity, it can weaken faith in God on a broad scale, and should he perform a mitzvah, the positive, inspirational effect could be equally far reaching.

This can also be understood on a deeper level, as the Nefesh Hachayaim elaborates: Every person is granted the power both to bring the light of Divinity to this world or to block its illumination if he so chooses. Thus the description mechalel Hashem (desecrator of God's Name) applies to a person whose actions serve to dim the rays of ha'oras panim -- His illuminating presence; and mekadesh (sanctifier) refer to the person whose action brings about gilui haShechina -- revelation.

Any action that makes God's truth more apparent is an act of Kiddush Hashem.

Kiddush Hashem can be achieved in two ways -- actively and passively. The active approach is simple to envision: a person does mitzvot with great dedication, involvement, and self-sacrifice, or he actually gives away his life for God's honor. Rabbi Yerucham Levovitz explains that Kiddush Hashem describes any action that serves as a vehicle to usher the Shechina, the Divine Presence into our domain. In other words, any action that makes God's truth more apparent is an act of Kiddush Hashem.

But what is "passive" Kiddush Hashem? To understand this, we refer to God's declaration of "bikrovei ekodeish" ("I will become sanctified through My close ones") in regard to the deaths of Aharon's sons Nadav and Avihu, who were consumed by holy fire during the consecration of the Tabernacle. Their transgression was so slight that commentaries have difficulty in pinpointing it. Their level of holiness was so great that it surpassed that of Moshe and Aharon (see Rashi on Vayikra 10:3), and they -- not their elders -- were chosen to be the kedoshim.

The Talmud explains that in our conception of things, God becomes elevated, awesome, and sanctified when He castigates tzaddikim, righteous individuals, even though they did not perform any acts of Kiddush Hashem per se; through suffering Divine retribution, they become instruments of "ekodeish" -- "I will become sanctified" -- through them.

We encounter many examples of this type of Kiddush Hashem:

THE CORRECTIVE KIDDUSH HASHEM OF THE NATION

The Kiddush Hashem of the Jewish nation is the realization of:

When the Jewish nation is punished on so awesome a scale that one can almost see the Divine Hand manipulating its fate, we are forced to say, "Why did God do this?"

The Holocaust can be attributed to no other cause than "Why did God do this?"

By the same token, the Holocaust can be attributed to no other cause than "Why did God do this?" The German-Jewish confrontation was not a case of two nationalities competing in a zero-sum-total situation, as existed with the Palestinians vs. the Jews. Nor was it a situation of the Jew as the prospering middleman between the drunken estate-lord and the oppressed serf, as it was during the pogroms of the Middle Ages. We cannot even ascribe the Nazi campaign against the Jews to the madness of a psychopathic aggressor, for deep, deep in the war, when every bit of aggressive instinct should have been engrossed in waging the war on the battle fronts, major emphasis was on the meticulous planning to carry out the Final Solution to its fullest infamy.

In a remarkably prescient essay, Rabbi Meir Simcha Hacohen of Dvinsk (the Ohr Somayach) wrote in the mid 19th century (in Meshech Chochma on Bechukosai) of an impending destruction due to the "Haskala," the Enlightenment -- total assimilation to the host culture of Western Nations; Rabbi Avrohom Grodzenski (who was killed in the Grodno Ghetto) made a list of specific sins that in his view brought down God's wrath; but all this is of secondary importance. The primary point made must be that one way or another the destruction was a Divine corrective action for a long-standing accumulation of shortcomings on the part of the Jewish nation over the ages:

My father, who was in the Kovno Ghetto with Rabbi Mottel Pogremanski (also known as the "Tavriger Illuy" [Tavriger Genius], told me that Reb Mottel would say discourses during the closing moments of the Shabbos. A deep hush would fall on the crowded room ... Reb Motel closed his eyes and began, in a haunting voice: "I see no German parading ... I hear not the bark of their rifles... Passages from Scriptures I do see ... I hear the Voice of God echoing from one end of the ghetto to the other: "As I live, said God, with a strong hand and an outstretched arm and a flow of wrath shall I rule over you ... I will gather you from the lands where you are scattered ... to a wilderness of a nation and I will wrangle with you there face to face" (Yechezkel 20:33-36). Had we been deserving, we would have accepted God's rule -- on our own; but we did not do so, and now He is forcibly imposing his dominion over us.

The prophecy, the warning, and the searing lament at the brink of destruction all seem to suggest that the Jewish nation had chosen to distort its collective image by emulating the nations, rather than pursuing its own sacred destiny. Meant to be a kingdom of priests, a holy nation, inhabiting the sacred soil of the Holy Land, it betrayed its charges. The "corrective action" for this was a brutal, massive rejection of Jewry by the most powerful of Western nations, the epitome of European culture -- Germany. This terrible suffering was "bikrovei ekodeish" before the eyes of humankind as a whole: God is our King, ruling us by His determination, if not by our own elective volition. And the purest, the saintliest, the most learned, the most innocent were included in this terrifying enactment of "bikrovei ekodeish."

The proper response? Perhaps this was most succinctly phrased by the Sforno in his commentary on "And Aaron was silent": "He found comfort in the Kiddush Hashem that resulted from their death."

The burden resting on our shoulders, the generations after the Holocaust, is not the burden of self-defense; nor is it the wreaking of vengeance on the Germans. It is the burden of knowledge by a generation that witnessed "bikrovei ekodeish". If we sin, it is the sin of one who has seen the fury of Divine retribution. It is committed with the callousness of one who has peered into the depths of Hell, seen the fires and heard the screams, and then continued on as if nothing had happened.

As Rashi comments on the impact of witnessing the death of the sons of Aaron: should anyone sin in a like manner after their death, it would be comparable to having witnessed a man drink poison and die, and then drink more of the same potion himself. As surviving witnesses, we are charged with an awesome responsibility.

This essay appeared in The Jewish Observer of September 1980 and is included in the collection of essays "A Path Through the Ashes", Mesorah Publications.

In Death's Shadow
G-d Time
Shavuot is The Holiday of Cheesecake and Blintzes
What Does Kosher Mean Literally?
Comments
MOST POPULAR IN Issues
Our privacy policy