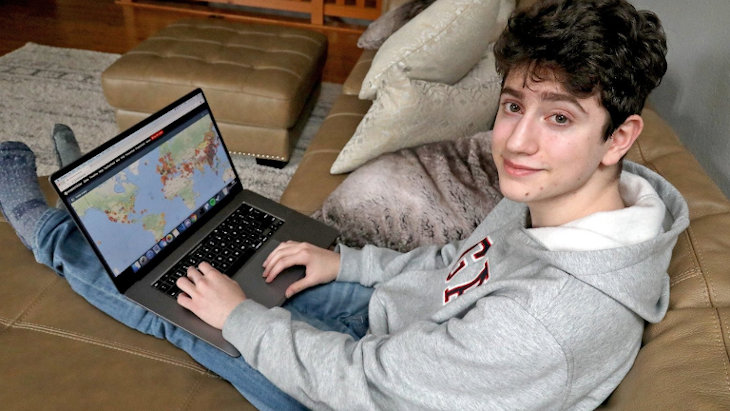 When the Covid-19 was first starting to make headlines in 2019, Avi Schiffmann, a high school junior from Seattle, wanted to learn all he could about the new disease. “It was very hard to find information – I had to go to all these local Chinese government websites,” Avi explained in an Aish.com exclusive interview. “So I decided to start my own website to track the virus."

The site he started – ncov2019.live – is now the world’s most popular website for real-time updates about the disease.

Avi lives with his parents, younger brother and younger sister in a heavily Jewish neighborhood in the Seattle area. His family is traditional in Jewish observance and celebrate Shabbat dinner together. When he was little they lived in Israel for a year where the family has lots of relatives. “I can read Hebrew, but I don’t always understand what I’m reading,” Avi quips.

The family moved to Washington State when Avi was eleven. By then, he was already fascinated by coding and had been creating his own websites and video games for several years. “I’ve been programming for about a decade, which is kind of crazy because I’m only seventeen,” Avi observes. Everything he learned about coding is self-taught. He used online articles and videos to teach himself how to create programs and run websites. 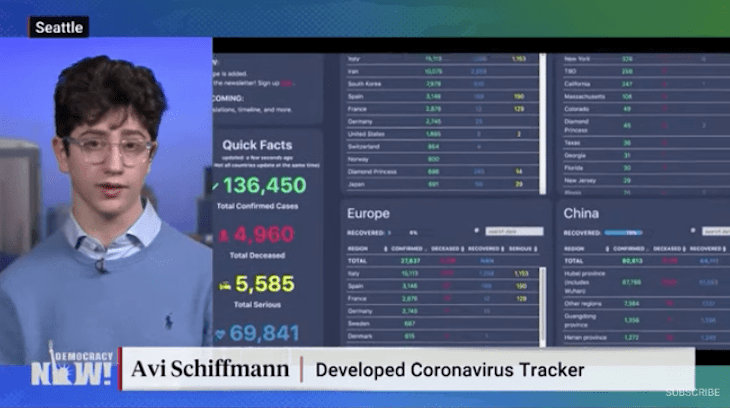 He experimented with several different websites before Covid-19 emerged in 2019, and he applied the lessons he’d learned in website design to create a new site where information about the number of Covid-19 cases and their locations could be tracked in real time. Avi’s father is a medical writer and his mother is a physician; their expertise has come in handy when it comes to understanding the science and medicine behind Covid-19.

To make his website easily usable, Avi turned to a brilliant idea that enables him update information in real time.

“I use something called web scraping,” Avi explains. His website constantly monitors local and national public health bodies in jurisdictions around the world, waiting for them to release updated information. The numbers of sites he has to monitor is vast. China alone has local health authorities for every province. Each time new data is made public, no matter where in the world, ncov2019.live updates itself to reflect these new numbers. The result is an easy to use way to see the numbers of Covid-19 cases around the world at a glance.

Launched in January, it’s already received 250 million visits. “Every 24 hours there are another 25 million visitors.”

For Avi, having up to the minute information is a key goal. “In this day and age it shouldn’t be hard to find the information you want. It should be a basic human right.” With so many people around the world living under lockdown and having anxiety over Covid-19, ncov2019.live has become phenomenally popular globally.

Launched in January, it’s already received 250 million visits. “Every 24 hours there are another 25 million visitors,” Avi notes. People have logged onto his website from every single country in the world, even Greenland. “It’s crazy,” Avi says. About half the users come from the United States and the rest from elsewhere. Israelis have viewed his site ten million times to date.

The site contains no advertisements, even though accepting them could potentially earn Avi huge sums in profit. “I didn’t want to clutter it with stuff,” he says of his website. He also feels that including ads would make the website seem “sell out-ey” as if he was doing it only for money. “It would ruin the user experience; people don’t like advertisements.”

Thousands of people email Avi from around the world each day, and he does his best to read and reply to every single message. Some users have explained how much the website meant to them. One American businessman was trapped in lockdown in Beijing and wrote to Avi to say that ncov2019.live was his only independent source of information about the virus and how grateful he was to be able to read something that wasn’t controlled by the Chinese government.

Some users complained that an earlier version of the website was overly negative because it only listed the number of Covid-19 cases and fatalities from the disease, and said nothing about the very large numbers of people who have recovered. After getting that feedback, Avi started including recovery rates as well. “It makes the website more hopeful,” he feels.

“I’m just a random kid who learned everything by myself."

Avi’s high school stopped classes a couple of weeks ago, and since then he’s been spending virtually all his time on running it and making it better. “I’ve had so many cool opportunities, learning how to run a high traffic website,” he observes. There’s also been a lot of pressure: he doesn’t want his website to experience glitches even for a moment. “Even if it’s nighttime and I’m sleeping, it’s daytime in Africa, and I have thousands of people trying to visit the site."

God willing, the Covid-19 pandemic won’t last forever. Afterwards, Avi hopes to take a gap year to enter coding competitions, then go to college, possibly to study business and computer science. Even though he’s running one of the world’s most popular websites, and is also taking classes in his local community college, Avi characterizes himself as a “terrible student” in high school. “It’s mostly because I spend 100% of my time on other interesting things,” he explains with a laugh.

For now, the entire world is benefiting from Avi’s passion for programming and the website he runs. He hopes that his experience inspires other people to push themselves to reach their potential, too. “I didn’t go to some college class to learn how to make this website,'' he explains. “I’m just a random kid who learned everything by myself. That could be really inspiring to other people around the world who are also dreaming of following their passions and making their mark on the world."

What's Stopping Al Qaeda
Should I Break Up, Get Engaged or Keep Dating?
Time Is Your Precious Commodity
A Constant World in Flux
Comments
MOST POPULAR IN Current Issues
Our privacy policy