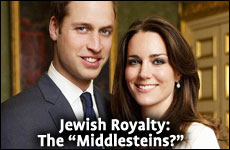 Will the next prince or princess of England actually be Jewish?

Who among us didn’t kvell when William and Kate vowed and cleaved on April 29, 2011. Okay, yes, it’s nice to see a happy couple unite and keep up the family business for at least the next two generations.

Kate Middleton’s mama, Carol, is the daughter of Ronald and Dorothy Goldsmith.

Ah, but for Jews around the world, there was even great nakhes when Alan Dershowitz told us that their future child … yes … the future King or Queen of England -- will be Jewish! According to the prominent lawyer, Kate’s mama, Carol, is the daughter of Ronald and Dorothy Goldsmith who he claims were Jews. So, we’ll finally have an emmes Jewish Prince or Princess now that Kate is expecting a bundle of Royal joy.

Before we do the Hora, I’m bound to report that royal ancestry-mavens whose job it is to ferret out blips (like a recent Catholic since Henry VIII), sort of deny any Jewish connection. I say “sort of” as no one seems really sure, or maybe wants to admit. However, many believe that given all the Jewish names on Katela’s side, chances are blu-ish Jewish blood runs through her veins somewhere.

The Jewish line thickens with her hubby Wills. It’s been speculated that Princess Diana's mother, Frances Shand Kydd was born Frances Ruth Burke Roche, a Rothschild. If that weren’t enough, the London Daily Mail reported that Diana is actually the biological daughter of Sir James Goldschmidt, also a Jew.

Between the two then, despite the churches, they probably should be saving for a Bar/Bat Mitzvah, as their heir may well be DNA-deep in Jewish roots!

And if so, what might Katela and Villy do with their Royal bubbeleh? After all, even one Jewish chromosome has the strength of a Samson, right? Of course right!

A JEWISH PRINCE OR PRINCESS: MY PERSONAL ADVICE TO KATELA

1. The Naming: Darling, we all know that you Royal Brits turn to the traditional “James,” “Henry,” and “George.” Feh! Our little Jewish prince or princess should be named “David” (or “Davida”). Now, this could cause your bubbe-in-law to fling her purse off Buckingham’s balcony. Remember, it was her Uncle “David” who abdicated to marry that skinny vilde chaya Simpson person, thereby almost overthrowing the Monarchy. However, simply explain to her that your little bubbeleh isn’t named for that oysvorf (outcast) – poo poo! but for the greatest Jewish King of all! Trust me. “David–Aaron-Moses Middlestein-Wales” will trip well off the tongue of the most capable Royal Mohel.

2. Symbols: First thing, you need to hang mezuzot on all the doors at Anmer Hall. Figure the “mains” -- front, west, east, north -- and maybe 457 more for each room. But face it, all that nailing could be “overdoing” when you’re expecting. So I suggest, starting now, you supervise say, 40 Gentile Royal butlers who know what to do with a screw driver and a ladder.

3. Appearance: You’re gorgeous! Willy’s gorgeous. But between you and me, Katela … nebuch, there are a few genes in the Royal pool (on the Gentile side) that could pop up like algae. Should, God forbid, your bubbeleh inherit, say, teeth like King James, or The Habsburg Lip, unlike your predecessors … lop. Fix! I know it’s anti-British (and who’s got the chutzpah to bully a future monarch?) But darling, do you want your little one to pose with his stunning parents if he has ears that could wave in the RAF? (NOTE: Should you decide to leave meeskeit-ish flaws alone, at least insist the Royal Guards give your daughter with the buck teeth, the code name “Shayna Maidel” – and say it out loud to help her self-esteem).

4. Dishes: Naturally your kinder will need two sets of Royal Melmac. For you, Katela, I’ve perused and evaluated your 753 choices and came up with White Doulton Melmac for milchig. Personally, I prefer the Red Wedgwood Beatrix Potter Melmac for meat.

5. The Royal Nanny: Choosing the right nanny for your Royal Yiddishe babe is a daunting task. You must test each applicant thoroughly! Here’s a list of excellent sample nanny responses which will tell you she’s worthy:

* “Darling … what are you doing in the royal potty for so long?” if he’s in there for over three minutes.

* “Oy! Could it be pneumonia? Quick, the Royal surgeon!” if he sneezes.

* “You’re too thin. Is the Royal mashgiach not feeding you enough, mamala?” if she’s under 100 pounds at age eight.

* “Sweetheart, I know your parents are bringing you on their tour of DeathValley. Pssst … promise me you’ll wear a sweater?” Hot/cold! Who knows with this global mishegoss?

* “I know you’ll be busy. But even a King can take a minute to call his old nannala once a week, mamala, right?”

* Finally, she should come from the highest yichus! She should at least be related to a Loehmann, or better, a Bloomingdale!

6. Athletics: Okay, you, Willy, and the mishpocheh fling and fly with the polo, football, rugby, hunting. Understand that your tatala will take one look, and swell up. With a 3,000 year history of allergies, he or she, God forbid, could go into Anaphylactic shock in the presence of a horse, never mind pigskin (pui)! But Katela, make sure he or she participates in healthy athletics. Getting out of the royal crib by himself by age five is nice. Also, lying by the royal pool maybe “dipping a toe,” or bouncing a wiffle ball is OK, too. As for toys, in additional to shopping at Genius ’R Us, encourage his innate desire to wear the black, fuzzy “bearskin” hats. Just borrow from a Royal guard who’s shlepping back and forth doing bupkes.

7. Holidays: Okay, true. This could be a little touchy with the mishpocheh, so settle this now! Christmas at Sandringham? Feh! Better you should spend Hanukkah with your side: “the Middlesteins.” As your papa already wears costumes during the Season, this will help prepare your little one for Purim.

So, Katela … mazel tov! And revel in the fact that your bubbeleh won’t hock you with meshugge dreams to become a tattoo artist, a Mini-Cooper salesperson, or a chimney sweep. No. He’ll follow you in the family business! And better still, your Jewish prince or princess will live in the castle with you until he’s employed -- at maybe age 60! Ai! Ai! Ai! Such nakhes! Enjoy, mamala!

The 2014 Jewlarious Calendar
Lessons from the Book of Jonah
Where Are We? The Body, Brain, Soul Problem
Dr. Sheila Nazarian’s Escape from Iran
Comments
MOST POPULAR IN Jewlarious
Our privacy policy
Aish.com Is Looking for Great Writers