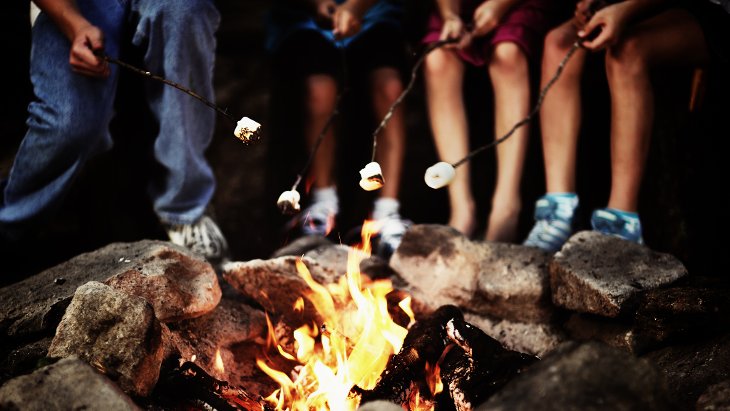 From the ropes course to the room with the air conditioning, this is what you need to know about Jewish summer camp.

I don’t want you to miss out on all the fun. I want you to be able to join in the conversation as one of the cool cats who also knows what it’s like to be considered a great athlete before having to go back to public school. Thus, I bring you the most important places and things that are at every Jewish summer camp, so you too will know the lingo:

Packages- What the other kids will get from their parents, because their parents love them and know how much their children love Pringles.

Annoying Wakeup- It could be a bugle, a PA system or an attention starved counselor with a megaphone. They could very easily use an alarm, but the camp experience is about being very annoying in the morning. This also includes some random guy getting down from the bunk bed with his legs swinging at your face. And then they tell you, “We do this because the rabbis teach that you’re supposed to ‘wake up like a lion to serve God.’” The response to this is to rip off the legs of your bunkmate and attack the division head who woke you up.

Nametag- That is what you need when living with forty people that are exactly your age and all wear the same North Face skinny pants. This helps for the first week of group laundry, before the nametag rubs out. You just better hope nobody else in your bunk also has the name “Sarah.” Or maybe put in your last name. Just pray there’s no other “Sarah Schwartz.”

Amazon- Summer camp would have disbanded if not for these guys. This is why they have the camp office. Otherwise, there would be nowhere for Amazon to be shipped to you.

Benches- They use benches at camp. A lot of benches. You will not have back support for two months. You’ll have a lot of long log looking places to sit, and not one of them will be comfortable. There probably won’t be enough benches, because the exact number each bench seats is between three and fifteen. This will all add to your fervor at services when you’re scrunched in there, praying for someplace you can sit without pain.

Picnic Table- This is another way of saying “a bench without back support.” If you’re creative and turn yourself around, you’ll have a good inch of table back support.

Campfire- Try not to start one of these. That is not good for anybody. Campfires are where you sit around a fire and sing folk songs written by Jews that are not Carol King.

Israeli Flag- Jewish summer camps are like little Israels where American kids have no idea what any Hebrew word means. They think that Degel, the Hebrew word for flag, is an activity. As they go to raise the flag throughout the summer they’re thinking Degel means waking up too early in the morning.

Golf Cart- The coolest thing in all of camp. It moves. It’s awesome. Anybody driving one of these is amazing. If you can jump on the back, you’ll be saving yourself a good forty meters of walking, until they stop short. That is enjoyment. If you can’t take pleasure in a car with no doors that moves at forty miles per hour dangerously on a grass, while children are walking to the waterfront, you’ve never been to Jewish summer camp. Nothing beats watching those little rascals dive out of your way as you sit in comfort.

Random Signs with Years on Them- Apparently they had Color War in 1988 too. And for 31 years they’ve been too lazy to take down the sign.

Announcements- Stuff you really don’t need to know, so don’t worry you didn’t hear them.

Gazebo- A building they didn’t fully build. They just got lazy and decided to not put up the walls. They might even call it a Sukkah or a pergola. C’mon, we all know it as a not a finished structure.

Girls Campus- I can’t tell you. I was never allowed there.

Canteen- Same things they have at prisons, but with more candy. Canteens are also something you drink out of, to ensure your water tastes like metal.

Baseball Field- The place they haven’t mowed since May.

Waterfront- Could call it “the lake,” but that would be scary. That would be almost as scary as the thought of random kids splashing water at your face, while you’re getting whistled at and trying to balance yourself on a moving dock being held up by milk cartons.

Room with Air-Conditioning- Where everybody wants to be, this room is almost as great as jumping on the back of a golf cart. Also known as the infirmary, this is why so many kids get sick.

Ropes Course- A dangerous area of the camp, where you balance on ropes and fall backwards into your bunkmate’s hands, with the goal of living. This is where your child learns not to trust anybody. With any luck, you will end up in the infirmary with a broken arm and air-conditioning.

Buddy System- A system of two nine-year-olds watching each other, so they can get lost together.

Woods- That’s where the killer lives.

Pigeesha- “Meeting” in Hebrew, this is a set time and place where people meet. You say it in Hebrew and it sounds like a special program to these kids. All you need to be a program director at a Jewish summer camp is to buy a Hebrew-English dictionary.

So there you go. Master this list and you will be a cool camp kid. Enjoy the summer! Sorry, the kayitz!