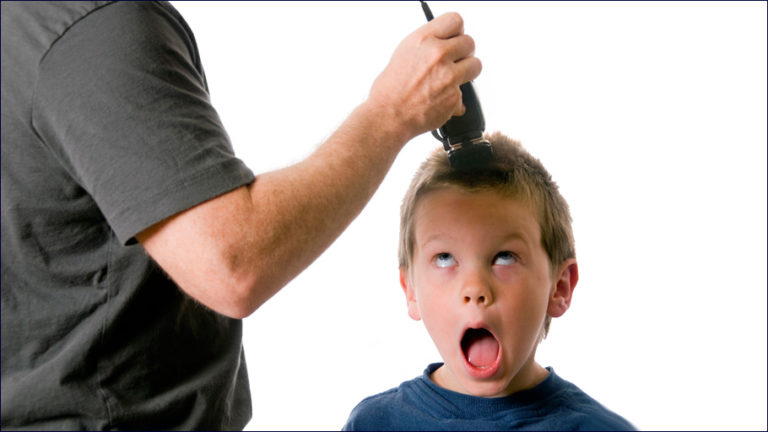 In Israel the “Number 2” is very popular. A barber takes clippers and runs them over your head and charges twenty dollars.

From Pesach to Lag B’Omer, the 33rd day of the Omer, it is a customary to refrain from getting haircuts and many men do not shave as a sign of mourning for Rabbi Akiva’s students who passed away approximately two thousand years ago. Of course after five weeks of no hair cutting, Lag B’Omer and beyond has become male haircut and shaving season. With that in mind, here are some of the shaving and cutting traditions and styles of Lag B’Omer that you will see:

You can always go with the “Big Kippah Look”

This is an Israeli style. The haircut is done by a barber who takes clippers and runs them over your head. After sitting there for a minute, the barber is done. The barber then makes it look professional by brushing the hair off the apron, and charges you twenty dollars.

The first time I got this haircut, upon my Aliyah (move to Israel), I was crying. I told him, “Number 2 is not a style.” I was wrong. The barber that cut my hair said it was. The barber then took the mirror and showed me the back of my head, just to add to my tears.

When the barber puts clippers to your hair on the number six setting and cuts nothing off your head.

You do not get a haircut. That is a good money saving hairstyle. The Grow Long is for people who got used to not cutting or shaving and are now embracing the new lifestyle of relaxation and unemployment. The Grow Long doesn’t work for balding men, like myself. That turns into the Ben Gurion look. And that leads to unemployment.

The Do It Yourself

This is similar to the Number 2, just that the hairline on the back of the neck is crooked. I started doing this after I got a Number 2. I figured that I had the ability to move something from one side of my scalp to the other and charge for it.

The big Kippah look is something you will see at this time of year. Many people get carried away with the shave cut, especially with the Do It Yourself. For this reason, and the Grow Long Ben Gurion look, Kippahs become bigger.

The side gets cut, but nothing is done to the top. This style started when a barber got lazy, put down the clippers and said, “That’s enough…I’ve been working too hard.” At that point, when only half the job was done and all the hair on top was still there, the barber told the person in the chair, “This is the new style.” Now all the kids are doing it, calling it the Fade. For those who don’t know, saying “That is the new style” is how all new styles start.

Got to leave the 2 on the clippers for the payot otherwise known as sideburns. You can make it sound cool by telling people, it is the “I got the haircut three weeks ago Fade look.”

That went out in the 1980s. That was a mistake. Similar to the Side Shave, the barber however doesn’t take any time to fix the error of undercutting the guy’s hair.

This is the look that Ashkenazi men above the age of forty go for.

In the Chassidic tradition, the first haircut of a child is done once he reaches three. In many cases, they save the date of the haircut for Lag B’Omer.

The tradition is to make the three-year-old child cry in front of all the onlookers. This is effectively done by having the whole community stand there while the young boy sees huge scissors jutting at his face for the first time. This first-time experience of sharp pointy metal going for the skull of the child ensures that the child will shed tears and not complain about his long hair for the next three years.

This also induces tears. This has nothing to do with the haircut. Pulling out a nose hair is just a good way to have a nice cry.

That is a style. You are born with it. But according to Israeli barbers, after they have cut your hair, they have given you a style. It’s called ‘Curly.’

The Half Beard Shave

It is tradition to not shave one’s beard over the course of Pesach to Lag B’Omer. Some normally beardless men shave for Shabbat, and others have the tradition of letting it grow so they will not get a second date. The first shave’s goal is to leave parts of the hair on the face for a day, so that one can feel like they were part of the disco generation. Generally, the man keeps the form of the Fu Manchu or Hulk Hogan to bother his wife.

Hairstyles You Won’t See in The Jewish Religious Community

We have to keep the sideburns long and we need to put on Tefillin. Tefillin are of upmost importance when choosing the cut. That is how all Jewish male hairstyles are born. Don’t let anybody fool you. Yeshiva kids would be walking around with mohawks if they were able to neatly place their Tefillin on it. The Mohawk with sideburns would look so cool.

You also won’t see names shaved in the back of the head like you see in the NBA for example. I have never seen somebody in Brooklyn pull off a Kippah with their name on it, to find ‘Moishee’ written into their skull.

The Pompadour was a good look and was cool in Grease, but again, you can’t get the Tefillin on this stuff. The Top Knot is a very neat style, and we do eat a lot as religious Jews, but Sumo wrestling is not our thing, and the Kippah covers it. Knowing myself, I would start crying trying to get the rubber band out of my hair.

Whatever haircut you get this Lag B’Omer and beyond, you want to call it a ‘Look.’

I hope you found my fashion tips useful. I am thinking about changing my career. I am going to start working for E!

Shul Bans Two for Testing Positive for Davening Enhancing Substances
The Promise Of The Land
Which Chat Are You On?: Parshas Behar/Lag Ba’Omer
Do You Like Slow-Cooked Food? Thank the Jews
Comments
MOST POPULAR IN Funny Stuff
Our privacy policy