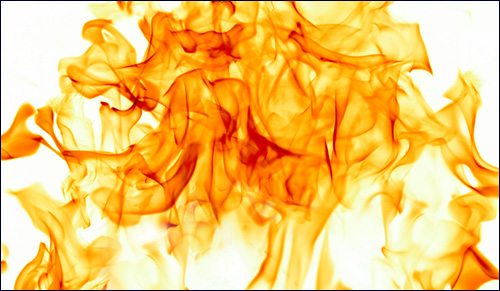 Tapping into the fiery, spiritual energy that is embedded in every iota of creation.

Fire. With dancing, leaping, flashing tongues of flame, fire lights up the Lag B'Omer night sky. Jews light bonfires to commemorate the holiday, continuing a tradition that dates back hundreds of years. Lag B'Omer is the day on which Rabbi Shimon Bar Yochai revealed the chief mystical work, the Zohar, through an explosion of fire, and it is the day on which he died.

The tongues of flame whisper a message. What is the mysterious, inner meaning of all the fire?

To unravel the mystery, we need to go 3,500 years back in time to young Abraham in Mesopotamia, left to mind his father's idol shop. He looked at the sun, the moon, the stars and heavenly bodies and concluded that it would be ridiculous to think that inanimate, man-made idols had control over these things. As he contemplated more and more evidence of design in the world, he concluded that there must be a Creator who controls all.

The world around him thought otherwise, and even united to build a tower to "fight" their conception of God. But the more Abraham saw in the world, the more he realized that everything is guided by the hand of the Creator.

Abraham's discovery is expressed through a metaphor that sheds light on the deeper meaning of fire. Abraham coming to recognize God is compared to a wanderer who sees a mansion engulfed in flames and subsequently concludes that the mansion must have an owner. The master of the house then sees the wanderer and introduces himself. Abraham similarly looked at the world and concluded that it must have a Master, and merited the Master's acknowledgement (Bereishit Rabba 39:1).

This is a difficult parable to understand. A burning mansion is more a sign of neglect than of ownership. What did Abraham, the wanderer of the parable, see that pointed to a Master?

The Hebrew language, the language of creation according to Jewish tradition, provides us with the key to unlocking the metaphor.

Every physical object or phenomenon, in addition to its physical reality, conveys a spiritual comment on existence.

The Hebrew word for 'thing,' the generic word that captures all physical objects, is 'davar.' Davar derives from the Hebrew root 'dibur' which means 'to speak.' This is no coincidence. It teaches us that every davar expresses a dibur -- a spoken message. Every physical object or phenomenon, in addition to its physical reality, conveys a spiritual comment on existence.

For example, a rose, on the surface level, is aesthetically pleasing and fragrant. But the rose also conveys a deeper message: intricacy and symmetry that points to intelligent design and a Designer. The external message is readily apparent. However, the inner meaning of an object can be elusive, and sometimes one needs to develop a sensitivity before one can understand the dibur - the message, that lies hidden within every davar - thing.

The fire of the mansion was an allusion to the dibur in every object in the world. Abraham saw the mansion - the world - on fire. Fire is a phenomenon. It has the power to transform anything that comes into contact with it into fire itself. The release of the latent energy in the object cast into the flames gives rise to a more powerful fire. Fire reveals that within everything, in addition to the practical function of a davar - a thing, there lies hidden energy that, when tapped, gives off light that was not apparent to one looking only at the practical function of the object. That energy is the metaphor for the dibur - the message embedded in everything in the world.

Abraham was able to look at the world and see the fire burning. As a child, he contemplated the sun, the moon and the stars and concluded that they were too sophisticated to be the product of chance. There had to have been a Creator, a Designer who fashioned everything in the world, and continues to control it all. For Abraham, the sun served more than its practical external functions of giving off warmth and light. It broadcasted the message that something so awesome could not have come about by itself.

Physics teaches the laws of entropy. Left alone, things in nature move from a state of higher order to lower order, marching toward chaos. Abraham realized that it is impossible to understand the world as the product of chance. To Abraham, everything in the world expressed a deeper meaning, intelligent design and a Designer who continues to guide his creation.

Abraham saw the mansion burning. The flames, however, were not the fire of destruction. Instead, they represented the hidden energy in the mansion of the world, the inner message, the dibur, that points to the greatness of the Creator who could form such a place. The figurative flames whisper that in addition to the simple function of every davar in the word, there lies a deeper meaning that points to God for those like Abraham who had the eyes to see it.

It is no wonder that we commemorate Rabbi Shimon Bar Yochai with fire. Rabbi Shimon lived in both realms at the same time; in the world of the physical as we know it, and in the realm where the spirituality in everything physical, the dibur in everything, was apparent. To Rabbi Shimon, the world was ablaze with spiritual energy, abounding with tongues of fire whispering messages about the Creator. Not surprisingly, Rabbi Shimon gave us the Zohar, the book of the mystical inner meaning that belies everything.

The ancient, the mystical and the spiritual have applications in modern times. The practical challenge of Lag B'Omer is to see the potential energy in every object and every person, instead of being fooled by the facade of the external.

Spirituality and providence are everywhere, even for those of us who are not Rabbi Shimon. However, we can easily smother the flames of inner meaning by covering over any sparks of life and attributing everything to chance.

Lag B'Omer invites us to look deeper and to hear the ever-present broadcast throughout creation. The flames of Lag B'Omer call to us and whisper that there is more to every person and every object than meets the eye, that one should never give up even if a situation looks hopeless. Look beyond the superficial and acknowledge deeper realms of existence; embrace worlds that we cannot see or touch, but which are every bit as real as the one in which we live.

Lag B’Omer: The Beauty in Every Jew

The Mystery of Lag B'Omer
Faith: the Axis Upon Which the Wheel of Science Turns
Love - Not Just About Chemicals Anymore!
Is There a Moral Code in a Virtual World?
Comments
MOST POPULAR IN Counting the Omer
Our privacy policy