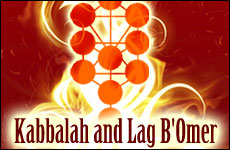 Forget the red string. What exactly is Kabbalah?

Lag B'Omer, the 33rd day of the Omer, is celebrated as a commemoration of the memory of Rabi Shimon bar Yochai. A prominent sage of the Mishna, Rabbi Shimon is best known as the author of the chief mystical work, the Zohar, or “Luminescence”. Accordingly, this day has come to be associated with the Kabbalah, the mystical tradition that deals with the concealed aspects of Torah.

If genuine Kabbalah is decidedly not a quick-fix derivative of Judaism ― a jar of blessed water, an amulet or a red string can bring blessing into your life and solve all of your problems – what is it exactly? Does Kabbalah have something to offer the uninitiated layman in terms of opportunities for growth and enlightenment?

The Torah has two general levels of meaning. One, called “pshat”, is the plain meaning of the text, without resorting to concepts that need to be learned from other sources. This term is somewhat deceiving, since even the basic meaning of the Torah’s texts requires ceaseless study and yields an inexhaustible fountain of inspiration and enlightenment.

The second level is that of “sod”, which means “secrets”. At this level, everything within the Torah can be seen as just the tip of the iceberg, and actually hints at esoteric levels of existence we do not ordinarily come into contact with. Generally speaking, the focus of attention at this level of Torah study is the ways in which God relates to this world. It describes the spiritual DNA of the universe.

The study of sod is also called Kabbalah. This is because the word Kabbalah means the reception of a tradition, and due to the extremely sensitive nature of Kabbalah, it can only be understood properly when received as a transmission from a knowledgeable scholar. The discipline of Kabbalah was given at Sinai as one of the levels of interpretation of the Torah. It was always studied as a part of Torah, and its existence is alluded to throughout the Mishna and Talmud, although its investigation was usually reserved for the most spiritually gifted of each generation.

Just as one cannot study calculus without being fluent in arithmetic or study quantum physics without a background in the basics of science, so too is it impossible to comprehend the esoteric secrets of sod without first having thoroughly studied pshat, the first level of Torah understanding.

Rabbi Shimon expressed the concepts of Kabbalah in a systematic way.

Because Kabbalah is the investigation of exceedingly subtle concepts, its study was always reserved for people who displayed superlative ethical qualities, greatness of intellect, a solid grasp of all areas of the revealed Torah, and scrupulous observance of the commandments. Its sublime nature dictates that it simply cannot be grasped by the unrefined mind.

Rabbi Shimon bar Yochai, seen as the father of the Kabbalah as we know it, did not create the Kabbalah; it was already in existence. What he did was express its concepts and underlying themes in a systematic way. Additionally, he merited Divine inspiration which helped him understand concepts and formulate new ideas. The Book of the Zohar remains the primary source of Kabbalistic knowledge until this very day.

Even after the exposition of the Kabbalah in the form of the Zohar, it remained an enigmatic and hidden discipline. The Zohar is extremely terse and is essentially written in a type of code. The greatest Torah personalities over the ages invested tremendous efforts in explicating and categorizing its themes. The most prominent of these scholars was Rabbi Yitzchak Luria, also known as the Ari, who made his home in sixteenth-century Safed, in northern Israel, together with most of the other prominent Kabbalists of his day. As Rabbi Shimon before him, the Ari not only categorized kabalistic concepts but revealed new ones as well. His works are considered the authoritative interpretation of the Zohar, and, in turn, serve as the primary text of Kabbalah today.

Digging Deeper in the Art of Torah Study

So what does Kabbalah have to do with our lives? Well, for one thing, just the awareness that every word of the Written Torah, every commandment given to us by God, contains unlimited depths of meaning should serve as a reinforcement of our commitment to Torah and its commandments. Additionally, that awareness can serve as an inspiration for each of us to see the Torah as a bottomless source of inspiration, education and meaning, and can prod each of us to proceed on our own ever-deepening investigation of Torah. There is always so much more than what meets the eye.

When studied properly and with guidance, Torah has the ability to infuse life with meaning and depth.

Some people turn to "Kabbalah" because they mistakenly perceive the non-esoteric aspects of Judaism as uninspiring and devoid of any deeper meaning. This attitude is one born of ignorance, for all aspects of Torah when studied properly and with the appropriate guidance have the ability to infuse life with meaning, purpose, and depth. There are secrets even at the most basic levels of Torah – secrets about how human beings work, how they can improve their lives, and how they can build relationships with their Creator. Kabbalah is for when you’ve exhausted that level of meaning and are ready for the next!

Having said that, it is important to stress that Kabbalah has some direct relevance for us, as well. Although its detailed study is best left to those with the proper prerequisites, many of its central themes have become cornerstones of mainstream authentic Jewish thought. A couple of examples:

One of the greatest contributions of the Kabbalah to the understanding of the importance of mitzvah observance and service of God in general is its broadening the scope of the effect of human activity. All schools of Torah thought stress the idea that one’s actions carry awesome significance and responsibility because of the effect they have on his self, not only in this world but in the world of eternity as well. As one of its central teachings, Kabbalah extended this sense of responsibility by stressing the cosmic effect every human deed produces, affecting all of creation at every level.

In the words of Rabbi Moshe Chaim luzzatto, 18th century Kabbalist, “God has ordained that…man’s actions affect the spiritual sources of everything in the world. Not only man’s deeds have this effect but even his words and thoughts…” And Rabbi Chaim of Volozhin writes, “A Jew must never say to himself, ‘Who am I, and what difference do my actions make, anyway?’ Rather one must understand and know and internalize that no detail of his every deed, word and thought, is lost. His deeds are exceedingly powerful and effective; each one ascends to higher worlds and has some impact there.” Viewed from the lens of Kabbalah, each one of us is in the control tower of the entire universe, and our every move has massive repercussions.

Another important teaching of Kabbalah concerns the interconnectedness between all Jews. Although unity is a basic Jewish value, the idea of unity can be grasped as an almost metaphoric one. For example, a partner in a firm may say, “We’re all in this together, so essentially we’re like one person; let’s treat each other accordingly.” In that case, they are in fact distinct beings; common interests and needs bind them together. But the Kabbalah teaches us that we are literally connected by virtue of our souls. The souls of the entire Jewish People emanate from a single spiritual source, so that we are all simply manifestations of one spiritual entity.

In the words of Rabbi Moshe Kordevero, a contemporary of the Ari who was buried right next to him, “You should love your fellow Jew as if he were you, because he is you!” Since at the deepest level we are literally one, there is no room for enmity between us. (At an even deeper level, Kabbalah teaches, there is a real unity not only between all Jews but even between all human beings and even all aspects of creation.)

The bonfires of Lag B'Omer are symbolic of the soul of the Torah.

On a similar note, the Ari taught that before each prayer, one should meditate on the commandment to love each Jew like oneself. Through doing so, one achieves unity with all of the Jewish People, and as a result of that his prayers emanate not only from him but from the entire Jewish People and are thus that more powerful. Today, this teaching is inscribed at the Ari’s tombstone in the ancient cemetery of Safed.

Kabbalah and the Bonfires of Lag B'Omer

Kabbalists have called Kabbalah the “soul of the Torah.” To the observer, a human being looks like a bundle of flesh and blood, while in reality the physical body is merely the clothing that houses the emotions, the intellect, and the spiritual component of man, his soul. The same is true of Torah. Even the depths of Torah available to us, those of pshat, are externalities compared to its inner dimensions.

The human soul is compared to a candle in that it serves as one’s guiding light. For that reason, we commemorate the memories of deceased loved ones by lighting candles. The bonfires that many light on Lag B'Omer are symbolic of the soul of the Torah, revealed through the efforts of Rabbi Shimon, whose memory we commemorate on that day.

May we all merit looking more and more deeply into the soul of the Torah, our own souls, and those of others.

Yair Danielsohn studies, teaches and writes in Jerusalem, where he lives with his wife and four children.

One Drink Too Many: My Journey of Breaking Free from Alcohol
The Scandalous History of the Aleppo Codex
Who was Two-Gun Cohen?
Why Really Everyone Believes in Free Will
Should Jews Support Ukraine?
The Jews of Cuba
Comments
MOST POPULAR IN Lag B'Omer
Our privacy policy