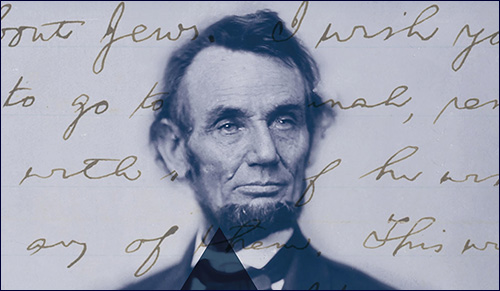 (SATIRE) 150 years after the assassination of Abraham Lincoln, one of the most revered – and researched – American presidents, historians continue to unearth new information about him. Lincoln and the Jews: A History, a new book released to mark the 150th anniversary of his assassination on April 14, 1865, sheds light on the 16th president’s relationship with the Jewish people.

My Book Great Historical Figures and the Chosen People: will be published by Meshuggina Press

Jonathan D. Sarna, Professor of American Jewish History at Brandeis, co-authored the book with Benjamin Shapell, a well-known collector of Lincoln-era artifacts who had acquired letters and primary-source documents illuminating the president’s interactions with Jews. “Lincoln always included, rather than excluded, Jews,” says Sarna. “Most of this story was not known, which is why we wanted to produce this book on the 150th anniversary of the assassination. The evidence presented here will surprise people, both historians and Jews.”

I was excited to hear about this book, because my own upcoming book is in a similar vein. It’s called Great Historical Figures and the Chosen People and will be published next year by Meshuggina Press. Since I have a rare affliction causing me to break out in hives whenever I have to do extensive research, the book will, instead, deal exclusively with my own fantasies of how these esteemed historical figures would, could, or should have interacted with the Jews. As you’ll see, however, these encounters appear so realistic and make so much sense that you shouldn’t be surprised if future historians determine their accuracy after all. You’re welcome.

So, now, as promised, a pre-publication excerpt from Great Historical Figures and the Chosen People.

Are you sitting down? Because I have something shocking to tell you, something which will contradict everything you’ve ever learned about Abraham Lincoln. To get right to the point, Lincoln was Jewish. That’s right. Where do you think Chasidic Jews got the idea of wearing long beards, black hats and long, black overheated clothing in any weather? And it doesn’t take a genius to see the parallel between “Let my people go” and freeing the Negro slaves. The final proof? Rather than deal with the expense of installing central heating, Lincoln split logs with an ax – no doubt while singing “Hava Nagila.”

If you’re familiar with Shakespeare’s plays, you know he took the side of the lower classes, the downtrodden, the persecuted. So, it can’t come as any surprise that he was sympathetic to the Jews and counted many of them among his friends. He’d even ask for their input and suggestions for his writing. Here are some he received: “To buy wholesale or not to buy wholesale, that is the question.”… “Shlomo, Shlomo, wherefore art thou, Shlomo?”… “To thine own self be Jew.”… “All that glitters is not Goldberg.”… “Horseradish! Horseradish! My kingdom for some horseradish!”… “Beware the Ides of March – and pickled herring past its expiration date!”

In his landmark book, On the Origin of the Species, English naturalist and geologist Charles Darwin posited that all species descended over time from common ancestors. This was reinforced by Darwin’s best friend and butcher, Shmuel Rabinowitz, who took out his photo album and showed how his cousin Rivka bore a striking resemblance to the Tyrannosaurus Rex.

Poet and author Edgar Allan Poe is best known for his tales of mystery and the macabre. As a boy, Poe hung out with several Jewish friends whose mothers inspired his later work. The mothers’ response when they found out that their children left the house on a cold day without their jackets – led to Poe’s imagery of a still-beating heart under the floorboards. And Poe’s famed raven that kept repeating “Nevermore” was a direct quote from one of his Jewish friend’s grandfathers who had just found out that his son purchased a suit at a retail price.

Yes, most people now know the “Maid of Orleans” as a Roman Catholic Saint who aided in the French victory over England. But very few know about her best friend, Miriam Schwartz. Miriam was always going on about her grandmother nagging her so much that she just couldn’t get her voice out of her head. The next thing you know, Joan was also hearing voices in her head instructing her to support Charles VII and recover France from English domination late in the Hundred Years' War. Also virtually forgotten by history is the fact that Joan was her town’s dreidel champion three years running.

We know him simply as Michelangelo, but he was born Michelangelo di Lodovico Buonarroti Simoni in 1475. Those of you with an inferiority complex may want to skip the next sentence. Michelangelo was an Italian sculptor, painter, architect, poet and engineer, considered the greatest living artist in his lifetime and one of the greatest artists of all time. His friendship with Jews began while he was painting scenes from Genesis on the ceiling of the Sistine Chapel. Visiting Samuel Feinblatt, a Jewish chiropractor specializing in “painters’ back issues,” Michelangelo befriended the Hebraic healer, who’d often have his famous patient over for Shabbat dinners, relatives’ bar mitzvah celebrations, and brises. A humble man, Michelangelo once stated that his best-know sculptures, Pieta and David “are nothing compared to Samuel’s mother’s matzoh brei.”

Don’t Ask the In-Laws This