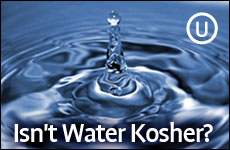 Ever notice how kosher symbols end up where you least expect them? Take apple juice. How could pressed apples not be kosher? Do you really have to worry that someone squeezed a little pig juice in that bottle before it was sealed?

Or, what could go wrong with, say… a bag of pretzels? Water, flour, salt. Sounds pretty kosher to us. How about a can of peas? Peas, water, salt. How much more kosher could you get? What about bottled water? Is there anything more kosher than water? Why does my Dasani need that little OU on the label?

Is every kosher symbol needed? No. Many everyday foods are perfectly kosher with no supervision whatsoever. But since the kosher market is worth hundreds of millions of dollars a year, some manufacturers invest in kosher certification for pure marketing reasons.

In the U.S., almost all bottled beverages are pasteurized.

But commercial food production is nothing like what happens in your kitchen. You'd be surprised to find that lots of ordinary foods can become un-kosher quite easily. For example: spring water. In the U.S., almost all bottled beverages must be pasteurized. Your spring water may run through the same bottling facility as non-kosher grape juice or drinks with non-kosher flavoring. Without a kosher symbol, your Perrier could be perilously close to non-kosher. Pretzels? Canned peas? Not so simple at all (see below).

We spoke with Rabbi Moshe Weiner at Flatbush's Kashrus Information Center to learn more about why lots and lots of ordinary foods really do require competent kosher supervision.

Keeping kosher at home can be a challenge. Keeping kosher in the factory can be a nightmare. What can go wrong in a food factory? Lots. And the use of cooking utensils constitutes some of the most common kashrut problems:

The Torah prohibits not only non-kosher food, but also the flavor of non-kosher food. Flavor, as defined by the Torah, can be transferred back and forth between food and utensils. So a pot or spoon might absorb flavor from a non-kosher product, then transfer it to an otherwise kosher product. In short: any food that has been cooked in any way whatsoever is suspect.

Commercial food factories are often shared by numerous manufacturers. The assembly line that today is baking your kosher biscuits might yesterday have been baking someone else's pepperoni pizza. Without an intensive cleaning in between, each biscuit is about as kosher as bacon.

Some banana chips are fried on the plantation where they are picked… in the same utensils the workers use to fry their burgers and ham. One kosher manufacturer once used a non-kosher facility to produce a run of margarine, only to discover after the fact that some of the equipment had never been kashered. Result: a three-month supply of kosher margarine that wasn't kosher.

Additionally, many foods are transported before packaging. For example, milk might be brought by truck from the dairy farm to the bottling plant. Trucks that have been used for non-kosher foods might render the milk non-kosher. Cooking oil is often transported in heated shipping containers. The containers require kosher supervision.

This intensive cleaning process -- kashering -- must render the equipment spotless and flavor-neutral. Only then may kosher production begin. The kashering must be performed properly by knowledgeable people. Then you have to worry about…

Commercial food production involves stuff you'd never find on the shelves at the Stop-and-Shop: stabilizers, conditioners, clarifiers, enzymes and more. That's just the stuff you don't notice. Natural flavors and colors could be made from anything, and they're used everywhere.

Imported honey has been found adulterated with up to 30% corn syrup, a concern for Ashkenazim on Pesach. Some candies are made with shellac, a shiny resin that comes from lac bugs. Not kosher. "Natural" flavors could come from animal fats. Not kosher.

Flavors can contain as many as 1,500 sub-ingredients, any one of which might by non-kosher and compromise the whole product. As a rule, flavors are never considered "nullified" -- even in the tiniest quantities. This even extends to food products not meant for consumption, such as grease used on baking pans, or gum meant for chewing only. Some unlikely (and unappetizing) sources of common flavors: sperm whale intestines (ambergris), cat guts (civet), beaver glands (castorium), pig pancreas (alpha amylase) and blood (albumen). Natural colors can be derived from dried insects (carmine).

With Israeli products, it's even more complicated. The Torah laws of Shmita, Orlah, Trumah and Ma'aser limit how Israeli produce may be used. If any part of your dinner was imported from the Holy Land, it probably needs special attention to be kosher.

What follows is a list of common foods that probably show up on your shopping list every week. But when it comes to kashrut, none of these "common" foods are commonly kosher:

• Canned goods: Canned peas contains peas, water and salt. Sounds kosher. But that can was cooked in the same factory where non-kosher canned goods may have been cooked just hours before. For example, cans of baked beans and cans of baked pork-and-beans often come off the same production line. Also, foods canned abroad (in China, for example) often contain non-kosher additives.

• Produce: Many leafy greens (lettuce, broccoli, cauliflower, etc.) are infested with tiny insects that are not kosher. If you can't or won't examine the veggies yourself, purchase packaged produce that has been pre-checked or produced in an insect-free greenhouse… and has reliable kosher supervision. Produce can also be coated with wax made from animal oils. Beware of fruits or vegetables sprayed with oleo (animal-based waxes).

Furthermore, Rabbi Weiner says that kosher supervision is recommended for frozen produce, which is blanched (lightly boiled) before packaging.

• Candy: May contain oils, flavors, glycerides or colors of non-kosher origin. Milk chocolate has the same concerns as other dairy products. All require adequate supervision.

• Bottled beverages: Juices may be treated with enzymes. Juice and beer may be filtered through glycerin or gelatin which are clarifiers. Many juices and sodas contain flavorings. Many beverages are transported by truck or shipping container before bottling. Nearly all are pasteurized. All require supervision.

•  Coffee & tea: Unless flavored, generally do not require supervision.

• Spices: Spice companies generally use a single oven to dry all their products. Paprika could be side-by-side with the bacon bits. Look for a reliable kosher symbol.

• Vinegar: Often made from non-kosher wine; requires supervision. Note that vinegar is a common ingredient in dressings, sauces, pickles, etc.

•  Dish detergents: Though they're not edible, detergents can contain colorings or scents of non-kosher origin. You don't want you dishing soaking in them! Use detergent with a reliable kosher symbol.

•  Aluminum foil, plastic wrap & paper towels: Although these often bear a kosher symbol, they normally do not require supervision.

• Oils: These undergo a purification process similar to pasteurization. Imported oils from the Far East are especially problematic. All oils require supervision.

• Potato chips: Raw potatoes? No problem. But when it comes to flavorings, oil and baking/frying -- supervision is required.

•  Baked goods: Pretzels, cookies, cakes, etc. often contain oils, conditioners or glycerides that could be non-kosher. All require supervision. Bagels are commonly made from mixes which include dough conditioners and "release agents" (a baked-in non-stick ingredient); both ingredients could be animal-based and non-kosher.

• Gelatin: This is made from the dried bones of animals that are non-kosher. Kosher gelatin is made either from fish bones, or from bones of kosher-slaughtered animals.

• Dairy products: Milk requires pasteurizing and bottling in a kosher plant. Yogurt often contains flavors which might be non-kosher. Enzymes used for making cheese must come from a kosher source (in kosher cheese production, most curdling agents are derived from plants or chemicals).

• Toothpaste & mouthwash: Generally do not require supervision (except for Pesach).

• Sugar & sweeteners: Sugar does not require supervision. Sweeteners do. Aspartame is made with phenylalamine, which can be derived from eggs or blood. Other sweeteners may contain cream of tartar, made from residue of (non-kosher) wine production.

•  Honey & maple syrup: Not only pasteurized, these may also be adulterated. Requires supervision.

• Meat & poultry: Requires kosher slaughter and proper salting to remove the blood. Also requires proper packaging, so it cannot be confused or switched with non-kosher products.

•  Fish: You need to verify that indeed the fish is of a kosher species -- i.e. that the skin is still intact, with the scales attached. There is an additional concern that the fish was cut with a non-kosher knife. Pickled or salted fish may only be purchased with rabbinic supervision.

One final word about kosher symbols: Just because a product is labeled with a "K" does not necessarily mean it's kosher. In America, there is no law barring a company from putting any letter they want on a label -- whether ice tea or pork rinds.

One rabbi says that he was supervising a kosher bakery in Florida, and they wanted to start using a non-kosher ingredient. So the rabbi told them, "If you use that ingredient, I will have to remove the certification." They replied, "That's okay, we'll just continue putting a 'K' on our packaging anyway."

A handful of national kosher agencies are widely accepted to be reliable and responsible. When it comes to shopping for kosher food, the consumer can take almost nothing for granted. Even the simplest foods can become quite complicated when produced commercially. If you spot a kosher symbol where you'd least expect it, chances are it's there for a reason. Ask your rabbi which kosher symbols to rely on in your home.

But don't let all this scare you. No matter whether you're in New York or Nebraska, your local supermarket is packed with products bearing a reliable kosher symbol. Fortunately, it's never been easier to find kosher food.

Reprinted with permission from Community Magazine, the most widely circulated Sephardic monthly in the world.

Aryeh Zev Narrow has been in publishing and communications for nearly ten years (aznarrow.com). He''s now a freelance copywriter and marketing consultant (and occasional journalist) residing in Spring Valley, NY.

Mezuzah: The Inside Story

Tzitzit
Bechukotai 5782: Divine Retribution
Behar 5782: Working to Live or Living to Work?
The Wholeness of Being Broken
Comments
MOST POPULAR IN Miscellaneous Mitzvot
Our privacy policy