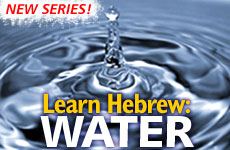 Speaking about the source of life.

Water – the source of life! We need water for drinking, cleaning, irrigating, cooling and other industrial purposes. We need water for fun and pleasure, for survival, for life. Water has always been a high priority in Judaism and in Israel. In the prayers, we find a blessing for the rain in the fall and for dew in the spring, symbolizing the uncertainty of precipitation in the Holy Land. The Torah itself is compared to water -- our spiritual "life-giving force."

A large part of the drinking water in Israel comes from precipitation pooled on the surface, in places such as the Sea of Galilee (

, Kineret) and the Jordan River (

, Nehar Hayarden). Water also penetrates through the ground until it reaches hard rock and accumulates there as underground wate(

, mey tehom). We can obtain this water through natural springs (

, miflas hakineret) with anxiety and hope. This unique freshwater lake, located below sea level, is the lowest freshwater lake on earth. People in Israel are pleased when the water level reaches 208.9 meters below sea level (upper red line), because this means that the Kineret is full. In such a case the Degania Dam, located at the southern part of the lake, is opened so the water can flow into the Jordan River. The last time the dam was opened was during the stormy winter of 2003-2004.

The national mood is somber when the water surface drops to 213 meters below sea level (the lower red line). At that point, no water is pumped from the lake.

As the population of Israel rises, water consumption increases. In other words, the water exploitation is higher than the regeneration of water. In Israel, some methods used to overcome this problem are:

, hashavat kolchin) -- the treated waste water can be used for irrigation and industry.

, hatpalat mayim) – several processes remove excess salt and other minerals from sea water, and transfer it into drinkable fresh water. The current and future desalination plants in Israel are planned to produce 300 million cubic meters of water by the year 2012.

•  Drip irrigation – Israel is a world leader in this field. The modern technology of drip irrigation -- using a plastic emitter -- was invented in Israel by a company called Netafim ("droplets").

Until the amount of fresh water in Israel matches or is above the amount of water consumption, the Israeli public and industry are encouraged to save water.

Proverbs Based on a "Water" Theme

A modern girl's name, meaning the Sea of Galilee

A modern name for both boys and girls, meaning "dew." 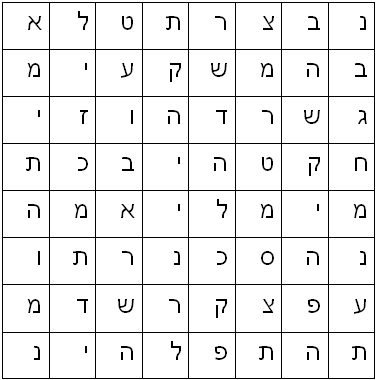 - Lirvaya
May you quench your thirst!