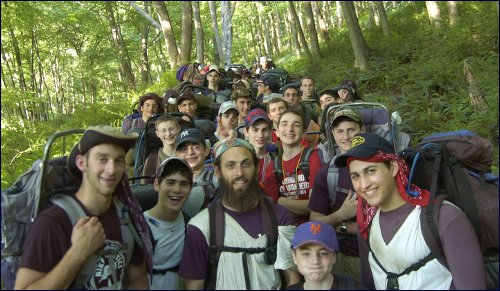 A survival camp helps Jewish boys find their place in the universe.

Shmuel was apprehensive on his first day of camp. He’d never been to sleep-away camp and he wasn’t the type of kid for whom things worked out smoothly. The head counselor, Tani Prero, asked all the boys to stand in a circle and introduce themselves. Shmuel stood, in the middle of the forest with a group of boys he didn’t know, waiting to present himself. He was uncomfortable in the spotlight. His turn finally came.

Shmuel had been unsuccessful in school which in his teenage mind translated into a lack of success in life. Labeling himself as ‘stupid’ made it easier for him to face the world. That way, nobody would have any expectations of him.

Tani looked at Shmuel. “I believe you about the first half,” he said. “As for the second half, you’ll have to prove that to me.”

At Yagilu, a wilderness camp for Jewish boys, Shmuel demonstrated himself to be anything but stupid. 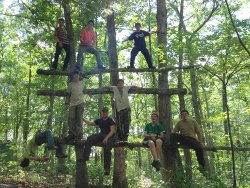 “I taught the boys how to tie knots using ropes and they’d build things in the trees with the knots,” Tani says. “I remember hearing someone call me, ‘Hey Tani!’ I looked up and there was Shmuel, standing on a log that was 15 feet in the air. I saw him jumping backwards from the tree and before I could register my shock and fear I saw him resting comfortably in a nook of the tree. ‘Hey Tani,’ Shmuel said. ‘Look, I invented a harness.’”

Finding Spirituality in the Great Outdoors

Tani Prero is the son and the grandson of pulpit rabbis, eloquent in their speaking, learned in Torah. But as a teenager, he felt a lack of direction and meaning in his life. He couldn’t figure out how to forge a connection with God the way that his father and his grandfather had. Until he discovered the great outdoors. 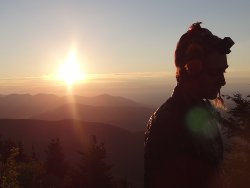 “My appreciation of nature opened me up to a whole new level of spirituality. Out in nature, I felt like I was in the presence of holiness. When I’d see people hiking carrying beer cans or talking on cell phones, I almost felt like they were violating a sacred place. There is something very holy about the world that God created.”

One night, Tani went out with a group to set up camp, to gather firewood and water. He had just finished learning The Song of Songs, a holy text written by King Solomon. Two words were on instant replay in his mind: “emtzaacha bachutz” – “I will find you, (God), outside.” Tani took a couple of moments and sat down next to the river, mountainside at his back. The late afternoon sun shone through the trees and a gentle wind blew. He sat and composed a poem, using the words of scriptures, in Hebrew. He hadn’t even known that he could write. The experience of the outdoors, the beauty and the wonder and the harmony helped him to understand his place in the universe in a way he’d never experienced before.

“I knew that I had to combine my passion for learning and teaching Torah with my love of nature and the feeling of connectedness to God that only comes from being in the wilderness. I wanted to help Jewish boys to find their place in the universe, just as I’d found mine - that’s how Yagilu Wilderness was born.”

Shmuel Baron was one of Tani’s first campers. That was more than a decade ago. Tani couldn’t believe that this kid had ever called himself stupid. It was the farthest thing from the truth. In the wilderness, he was absolutely brilliant.

“I taught the boys how to make their own bows and Shmuel finished his in record time,” Tani says. “Then I taught them to make arrows and, again, he was done way before everybody else. So I coached him on how to make arrowheads using rocks as tools to chisel other rocks, a method called flint knapping. I gave him just the basic instructions. Within a relatively short period of time, he’d made five arrowheads that looked like they’d been constructed by experienced Native Americans. They worked perfectly. The kid was brilliant.” 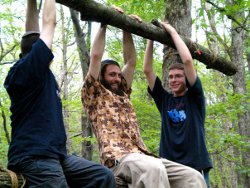 “Another day, we built sandcastles at the beach, just for fun. Most of the boys worked together in groups of three, or five or 10. They built amazing moats and bridges and tunnels. Although Shmuel generally worked well with other boys, I saw he was working by himself, making a giant pile of sand, which wasn’t at all what I’d expected of him. But there he was, making the pile larger and larger. When I came back later, there was Shmuel, sitting next to – not a mound of sand, but a giant sea turtle that looked like it had emerged from the lake he sat near. It had a shell and claws and you could even see its eyeballs. I’ll never forget that.”

As the summer progressed, Tani and Shmuel forged a special relationship. One day, Shmuel revealed to Tani another layer to his lack of confidence in his own abilities.

“In camp every boy has a turn to lead the prayer services at least once during the summer,” Shmuel says. “I didn’t know what to do because I could barely read. I was so embarrassed. I was petrified my turn would come and everyone would figure out how horrible my reading was. ”

Tani decided to let him slip quietly under the radar instead of leading prayer services like the other boys. But on the last night of camp, Tani gave him an opening.

“I knew how much he’d grown over the summer,” Tani said. “I asked out loud if there’s anyone who wants to volunteer to lead the evening services. Shmuel jumped up and said, ‘I’ll do it!’”

When Shmuel began the first word, Tani saw that he hadn’t been exaggerating about his difficulty with reading. He tried his best, fumbling through the words, getting some right and others not so right. Instead of taking the usual 10 or 15 minutes, the evening services took 25 minutes. But his friends were supportive. Instead of getting fidgety, they sat silently, listening and waiting patiently for him to get to the end.

“The moment he finished, the entire camp burst out cheering and clapping,” Tani says. “Then they started singing and dancing for Shmuel. Shmuel was beaming and crying out of happiness right along with everyone else.”

Today, Shmuel is the 25-year-old vice president of development for a Web design company. He still remembers camp as an amazing and transformative experience and keeps in touch with some of his friends from camp.

“It was a really great adventure,” Shmuel says. “I just had the most positive feeling there. It changed me.”

“He never did prove the second half of his statement from that first day of camp,” Tani says. “Not by a long shot.”

Tani Prero has a master’s-degree level certification degree from The Kibbutz College in Tel Aviv in wilderness survival training, an MA in education from Loyola University of Chicago and Rabbinic Ordination from Yeshiva University. He has taught at a number of schools catering to adolescent boys including Bnei Chayil and Shaarei Arazim. Yagilu Wilderness is a shomer Shabbat wilderness survival camp for boys ages 12-18, run under the auspices of Camp Morasha. References to Yagilu in this article include its predecessor camp.

Mandy Patinkin, I Hear Your Cry
Olivia Newton John’s Grandfather was a Nobel-Prize Winning Jewish Physicist
Don’t Believe in Other Gods Versus God is One
Seeing Without Eyes
Comments
MOST POPULAR IN Israel
Our privacy policy
Aish.com Is Looking for Great Writers