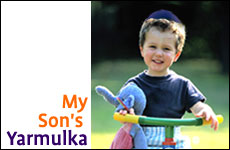 As a child of Holocaust survivor, it's hard for me to imagine that my child will openly declare his Jewishness to everyone.

My son will soon be turning three, have his first haircut and start wearing a yarmulka. I approach the time with anxious impatience. At every opportunity, I ask Michael whether he would like to put his yarmulka on, trying to get him used to it. But the truth is that I don't really think it's going to happen. It's hard for me to imagine that a product of my womb will openly declare his Jewishness to any and all who see him.

My father can't even imagine wearing his yarmulka outside the home. How could anyone be so foolhardy to expose himself to a world he believes hates Jews so ferociously? Living in a Hungarian village as a child, he would run terrified from his home to school, knowing that there were ruffians waiting all along the route to beat the little Jew-boy up. Then the yellow star, and the darkness that followed.

Even after the concentration camps were liberated, Hungary was occupied by religion-haters, and identifying yourself as a Jew could lose you your job, or a place to live. It's no wonder he taught me to actively avoid exhibiting physical indicia of my Jewishness.

My father still enjoys being ethnically anonymous in a crowd. When he immigrated to the New World, he discovered that people are not very good at judging your racial origins by looking at your face. So that if you do not put out any obvious signs, people will not guess that you are a Jew, and you can listen to work colleagues make anti-Semitic small talk without being afraid.

For my father, wearing a yarmulka means the private world, the home. It means that you trust the people you are with enough to expose yourself to them. To wear a yarmulka outside is like undressing your most private parts in public. When he was in Israel the first time, my father wore his yarmulka in the street. It was an extraordinary experience; he was able to bring his secret private space out into the open.

For a Jewish woman, it is much easier sit on the fence about these issues of identification. The Jewish dress code for women focuses on covering things like elbows and knees; for females there is no outward expression of Jewishness which all the world can see. When I was in college, I fought my fear of publicly proclaiming that I was a Jew and started wearing a Magen David necklace over my clothes. Surprisingly, my father did not object when I paraded around his office with this conspicuous ornamentation.

But after a while, the Magen David no longer satisfied the need to announce my Jewishness to the world: it could be too easily hidden away if needed; and it had no religious meaning. It was just about me volunteering to decorate myself Jewishly.

My husband, Moshe, just about never takes his yarmulka off. His worst memory of a surgery he had as a boy was when the nurse took his yarmulka away, and when he cried out for it in the night, they wouldn't give it back to him. Moshe has traveled through Western and Eastern Europe, never removing his yarmulka, never covering it up. When someone advised him to take it off at work, he said as long as people were coming in with rings in their ears, noses and navels, he was coming in his yarmulka. He's a third generation American and just can't see what all the fuss is about.

My son is named after my uncle, who taught himself French and disguised himself as a diplomat to hide from the Nazis in Budapest during the War. We don't know how he died. We assume that someone recognized him, and then all the Gestapo had to do was strip him, find the circumcision and, as was their practice, shoot him into the Danube. Bodily symbols are very important in our history, our culture.

Three years ago we imprinted upon my son one indelible sign of his Jewishness. In a few weeks he will show to the world another sign. And in doing so, he will announce his allegiance to our people in the public domain. For him, it will be a coming of age. For me, a coming out.

Viva Hammer is an attorney in Washington, D.C. She has published in several places, including The Washingtonian, The Forward, Jewish Action, and Los Angeles Jewish Journal.

L’Chaim: To the Toastmasters

Jewish Captives In Iran
Why Are The Prayers Of Yom Kipur So Repetetive?
Ha'azinu 5783: A Time for Unity!
Twisted Thinking
Comments