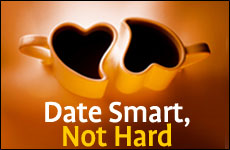 Staying focused, by using a simple formula, may help us shorten our journey from dating to marriage.

My concept of Jewish dating was somewhat skewed when I began seriously looking for my better half. Having never seen Fiddler on the Roof, I had no strains of "Matchmaker, matchmaker, make me a match. . ." wafting through my subconscious. I didn't think that a third party, let alone God, would have much to do with my success. It was all on me.

Dating meant going to a Jewish singles event at a synagogue or local venue and making small talk with someone of the opposite gender, which seemed more like a chore than a social life.

As a 20-something single living in Los Angeles, I networked, put myself out there and went to cool singles' parties, only to end up in one bad relationship after another and always shocked at the outcome.

For a while, I consoled myself with the notion that each bad dating experience was somehow educational and would serve to keep me from repeating my mistakes. For a while, this worked. Then it got old, and I realized that I wasn't getting any younger. I came to the conclusion that I needed to get a handle on how to date.

I mean, why date anyway?

After a great deal of introspection, I decided that the purpose of dating for me was not for a social life, or lack of one, nor as a cure for loneliness. It was ultimately for marriage.

There are three major points to consider when dating for marriage: attraction, character traits and common life goals.

Saying this out loud... okay, whispering this to myself, forced me to ask myself why I continued to date guys who were not marriage material (for me). Dating, in my book, still meant just kind of showing up and waiting for something to click. I figured that I would just win over anyone I thought was in the ballpark.

The ballpark of course was filled with cute guys who had jobs. So I dated a lot of cute guys with jobs and dutifully broke up with the ones who were generally unemployed. But the cute guys with jobs often behaved like total jerks and somehow grew less and less cute over time. So what was a nice Jewish girl to do?

I decided that if I was serious about dating for marriage, I had to find out how to maximize my time and minimize my suffering.

I became more interested in Judaism's insights about dating. I learned that there are three major points to consider when dating for marriage: attraction, character traits and common life goals. The latter two points had never entered my radar screen before, but when I thought about it, I realized that without them I had been wasting a lot of time.

Out of necessity I learned quickly that there is a lot more to say on the topic of dating. With this new information I changed the way I began to date, which had a profound impact on my life.

One thing I noticed was that people do not want to waste time or focus on trivial matters when they are dating for marriage. Still I found it difficult to know what to emphasize and what to deem less important when evaluating a person as a potential life partner. Staying focused on these three major points kept me on track:

While it seems obvious, I'd like to emphasize the importance of attraction. You have to be attracted to someone in order to marry them; physically, spiritually, mentally, emotionally and intellectually. Even if "Matchmaker , Matchmaker. . ." sets you up with someone who looks great on paper, it is unwise to commit to marrying someone unless you are wildly excited to be with them for hopefully the rest of your life.

It is important to mention that the concept of attraction can mean different things to different people. Unfortunately the media has a great deal of influence on our subconscious with respect to who and what we find attractive and to what degree. Although it can take time to develop or know if there is a basic level of attraction, after a few dates if you have to convince yourself that you could tolerate it if the person held your hand but you feel that this would be a charitable act on your part, you don't need another date as a confirmation. Be polite and say good night.

Assuming that attraction exists between both parties, the next major focal point is character traits. When I say character traits, I do not mean an individual's personality. Someone can have a nice personality and not be a nice person. A good way to assess someone's character is to see how they treat children, animals and people whose job it is to serve them, such as waiters, salespeople or cabdrivers.

One time I was on a date and we went for drinks. The place was not terribly busy and the service was a bit slow but I didn't consider it to be a major big deal. My date was seriously rude to the waiter and I was totally embarrassed for both of us. It didn't matter that my date had brought me roses. He was unnecessarily rude to the waiter and that's what I remember about that date. It's easy for someone to be on their best behavior for someone they are trying to impress, but observing one's behavior in less obvious situations can reveal a great deal about a person's character.

Sometimes people make the mistake of staying in a relationship because "She's just so nice" or "We have such great chemistry." But if she doesn't want a relationship with your kids from a previous marriage or your "chemistry partner" has openly admitted that he has no interest in being anyone's marriage partner then you are wasting your time.

It is a necessity for both parties of a potential couple to possess common life goals. People often mistake lifestyles for life goals. If two people love playing tennis they share a desire for a common lifestyle. But if those same two people disagree on whether or not to have children they definitely lack commonality of an important life goal.

A common mistake to watch out for is marrying someone for their potential; for the person you hope they will become. If someone has a drug addiction, a short temper, lack of restraint with spending money, etc. but are otherwise "perfect" for you, don't get married hoping they'll change. You have to be real about who you are and the life you want. Therefore you also have to be real with who you are dating and where your relationship is going.

Taking the time to investigate the subject of dating over the years provided me with tools to get the clarity I needed to recognize my husband. I developed an acronym, DATE, which helped me stay focused during my search:

Define Life Goals -- You have to know your life goals in order to assess if your potential partner and you have common life goals.

Assess Level of Attraction -- Attraction is like a thumbs-up from God. Without it, it is virtually impossible to build a lasting relationship.

Try it -- If you are clear that there is no future in it, you aren't doing anybody a favor by continuing to date someone, even if they are nice.

Evaluate Strength of Character -- We are all trying to perfect ourselves. It's a lifelong journey; however, there is no compensating for major infractions in this area.

Before you go shopping it's helpful to have a list. If healthy food choices and other household essentials are on your shopping list, you are less likely to come home with a cartload of donuts, soda, cigarettes and supermarket tabloids, right? However, many people I have talked to in the dating scene (former or present members) have expressed an intense dislike for lists. Sometimes you might rule out someone fabulous for a less than crucial reason. Just because you have a list of ten must-haves in a spouse and this really nice person you just met only has nine, is it smart to write them off at the starting line?

You might feel very strongly about marrying someone who is a baseball fan. Your soul mate might think that "Red Sox" is solely a typographical error. However, if that person respects you and your love for baseball, is it worth passing them up for a second date? By sticking to a simple yet non-negotiable formula you might be able to focus on genuine, multi-faceted attraction and assess another person's appropriateness as a life partner.

After a few dates if the level of attraction is not growing stronger, you find that you don't share life goals and you're not sure that you and that person will bring out the best in each other, move on gracefully and be thankful for the clarity. Although breaking up is hard to do, when it's the right move it's better to make it after three dates than after three kids.

While I would never willingly revisit the often treacherous road of single life, the clarity I gained while learning how to date more effectively finally led me down the aisle to my husband. Focus on what you want in life and who the best person will be to share it with. Don't get distracted; use your time wisely. In other words, date smart, not hard, and may your journey be swift and sweet!

How To Survive Getting Dumped

How to Get Married After 35
In Aftermath of Chicago’s July 4th Shooting, Local Moms Provide Countless Points of Light
Baked Burik Recipe
Blocked Goals and Anger
Comments
MOST POPULAR IN Dating
Our privacy policy