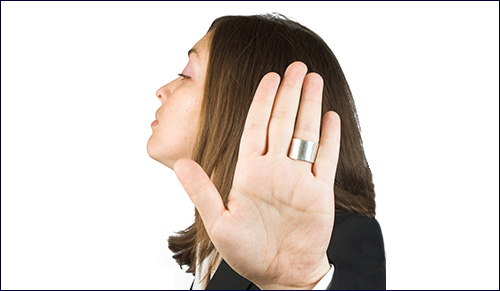 How to move on after you've been dumped.

My phone rings and I hear the subdued voice of a close friend on the other line, “He said no. I really thought this was going to work out. I feel so rejected.”

Rejection. The word itself stings.

For those of us who have been involved in the dating scene for a while, the concept of rejection is not a new one. It could come after we have just met someone and were excited;it could come after things have gotten more serious and we were hopeful. Eventually that abrasive word begins to grate on us. As we turn to our kitchens to eat our feelings, we begin to wonder, Is there something wrong with me?

Thoughts begin popping into our minds: Do I need to lose a few pounds? Is it my fault that my parents don’t have an education? Am I not religious enough? Did I not express myself correctly?

People often color the past for comfort. Many people will pin the other guy (or girl) as a jerk, undeserving, or immature. Somehow, when you dated him, you thought you that he was God’s gift to the world, but the second you hear that word ‘no,’ you begin to mutilate every memory of him that you possess.

This is one way to handle rejection.

You can move on while still believing in the goodness and quality of the other person.

But there is another way of viewing the situation – a healthier way that is more in accordance with Jewish values. It’s a way that affords one the opportunity to move on while still believing in the goodness and quality of the other person.

The last words the father of the Baal Shem Tov (the founder of the Chassidic movement) said to him before his passing were: “Fear nothing but God alone. Love every single Jew, without exception, with the full depth of your heart and with the fire of your soul, no matter who he is or how he behaves.” Every single person is in possession of a spark of G-d and is entitled to my respect. He has a soul and unique purpose on this earth that only he can fulfill.

Thank God, there are plenty of phenomenally wonderful people in the world. But only one out of those thousands is meant for you.

In the dating process we are often fortunate enough to cross paths with those objectively fantastic people. We all know the type; those individuals about whom we feel happy with the knowledge that we live in a world in which the other exists. And for a while, we hope that this is the person that we will be able to spend our lives with. But for some reason it didn’t work out.

The fact that it didn’t work out is not necessarily a reflection of the properties or characteristics of either one of us. It does not have to indicate that I am defective or that he is inadequate. Instead it’s a gift of clarity from the Almighty. It may be a disappointment, but knowing that there is Someone Else in charge allows me to be assured that this is either not the right time for this particular match, or that there is someone out there who is more fitting for me.

The Talmud says that 40 days before an embryo is formed, a heavenly voice calls out, “So-and-so is to marry such-and-such!” For some of us, it just takes a while until we find our such-and-such.

So whoever you are that is reading this, be confident in your abilities, your qualities, and God’s capacity to conduct this world in a way that is entirely more perfect and complicated than you can begin to imagine.

If your date says no because you grew up non-religious, thought you were too serious, or because he just “wasn’t feeling it,” – the reason doesn’t matter – he is not a bad person and nor are you. He is just not your guy. The person you are meant to marry will find you – and embrace your qualities.

The word ‘rejection’ need not have such negative connotations. In fact, rejection is a blessing. It brings you one step closer to meeting your match… because he (or she) is out there. And he is searching for a person just like you.

Not Feeling It, Should I Break Up?

3 Things I Wish I Knew when I was Dating

Three Tips to Dating an Introvert
Near Death Experience Panel
The Western Wall: The Heart of the World
Ask the Right Question: Tisha B’Av
Comments
MOST POPULAR IN Dating
Our privacy policy
Aish.com Is Looking for Great Writers