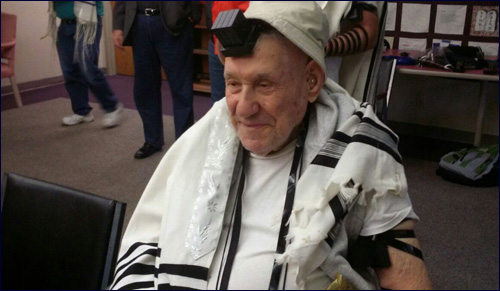 Sometimes it takes a community.

As a former member of the armed forces, veteran Max Landsman was honored with a full military funeral after his death on July 12th at the age of 96. And as a member of the Jewish nation, Max Landsman was honored with a full religious burial, something that happened through the combined efforts of several dozen people, most of whom had never even met the World War II veteran or any of his family members.

Landsman was born on December 31st, 1918 in Brooklyn, New York. He and his wife Ida raised six children and were the proud grandparents of seven grandchildren. Landsman, who worked for the New York City Transit Authority, lived in the Monsey area for many years, and when his wife Ida died over 30 years ago, Landsman buried her at the Frederick W. Loescher Veterans Cemetery in Monsey. While Landsman eventually moved down to Florida, he knew that one day his final resting place would be next to Ida, in Monsey.

That day came on Wednesday, July 15th. It’s hard to imagine that Landsman, or any of his family members, could have anticipated the flurry of activity that preceded his burial. 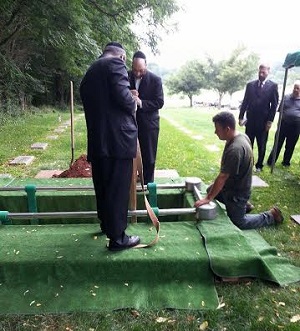 It all began with a request posted on Facebook one day earlier from Landsman’s daughter, Gloria Levine, who was unable to come to New York for medical reasons and was concerned that there might not be a minyan at her father’s funeral. Levine’s cousin, Rivky Hertz, saw the appeal for a minyan and shared it on Facebook, where it was noticed by several people including Abby Binah, who runs the Keren Dovid Winiarz Free Items Gemach. Binah tagged several Monsey contacts hoping that they would be able to make the minyan including Rabbi Jonathan Gewirtz who realized that there was another issue to be dealt with: Landsman was about to be buried in a non-Jewish cemetery.

Both Binah and Gewirtz worked the phones that night trying to find a way to shift the burial to a Jewish cemetery, but it was a complicated effort and Landsman’s family decided that it was too late to arrange for an alternate location. Meanwhile, news of the upcoming funeral was making the rounds through Monsey Facebook groups, What’s App, synagogue emails and other means, as locals contacted each other, hoping to shore up a minyan to honor Landsman.

Gewirtz was pleasantly surprised to see a respectable turnout when he arrived at the funeral and set to work doing his best to ensure that he would be buried according to Jewish law. Thankfully, the customary tahara (purification) had been done in Florida and after some gentle persuasion, gravediggers allowed Landsman’s casket to be lowered into the ground by Jewish hands. Family members and Monseyites shoveled dirt by hand onto the coffin, ensuring that Landsman’s burial had been completed according to Jewish law. Both Rabbi Daniel Pernick and Rabbi Gewirtz eulogized Landsman, with Rabbi Gewirtz speaking about Landsman’s life of service, the Torah’s special appreciation for those who serve others and the strong kinship that exists between every member of the Jewish faith.

“I spoke about how many of the people present didn’t know the deceased or the family members,” said Rabbi Gewirtz. “But in truth, we’re all family and that’s why we were all there.”

Over two dozen men from all across the religious spectrum turned out for Landsman’s funeral. Each one played a vital role in ensuring that Landsman was buried as a Jew.

Mendy Halpert, a 28 year old sales representative, received word of the need for a minyan just one hour before the funeral’s scheduled start.

“It struck a chord with me that here you have this person, this Jew, whose family is coming in from all across the country and is desperately trying to arrange a minyan and I’m at work five minutes away,” said Halpert. “It was a no brainer and the looks on the faces of the family members showed how appreciative they were of the support from the local community. It was also special to honor a Jewish serviceman who served our country in World War II.” 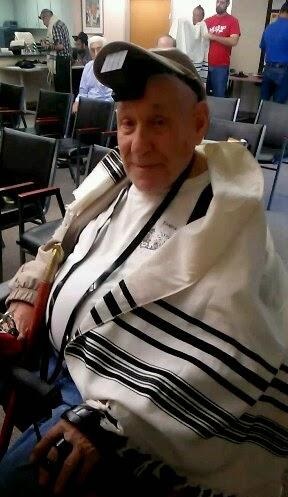 “It was amazing to see how many people left work or used up their lunch breaks to make sure a neshama (soul),who wouldn’t have had it otherwise, got a proper send off,” added 25- year-old Hillel Kapnick. “We know that a person after passing away is still ‘around’ until after the body is buried. I am sure that Mr. Landsman never expected to have a crowd of Jews in white shirts, jeans, long coats and yarmulkas of all shapes and colors to see him off to the next world. I hope it helped enforce the message we tell our children all the time which is that we are an ‘Am Echad, one nation.’”

Rabbi Levi Rivkin of Bais Menachem Chabad in Tampa, Florida, knew that he could always count on Landsman to make the minyan on his Monday and Thursday morning visits to the Weinberg Village retirement community that Landsman called home.

“He never said no to me. He was like a soldier. He was still in bed but he would get up and come and he frequently was the tenth man. If his daughter was reaching out for a minyan for his funeral, you think Hashem wouldn’t listen so that this Jewish soul, who was devoted to making a minyan, could have a minyan for his neshama?”

They say it takes a village to raise a child, but last week in Monsey it took a community to escort a man they had never met to the next world and to show his family just how deeply Jews care for each other.