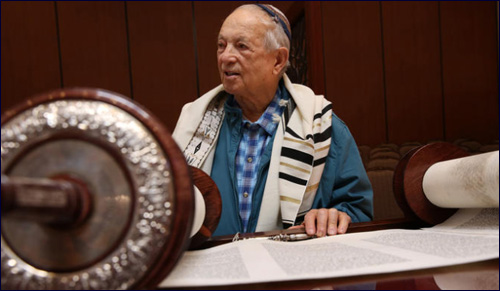 Delayed by the Nazis, Harold Katz is the first person to read from the Torah Scroll he has dedicated.

Seventy-six years ago Harold Katz prepared for his bar mitzvah in Czechoslovakia, but the Nazis took over his home town before he could read from the Torah. His father, mother, three brothers and four sisters were murdered in the Holocaust. “They’re always with me,” Harold says. “In dreams, I see them.” One of Harold’s brothers survived and Harold’s own survival is a miraculous story. 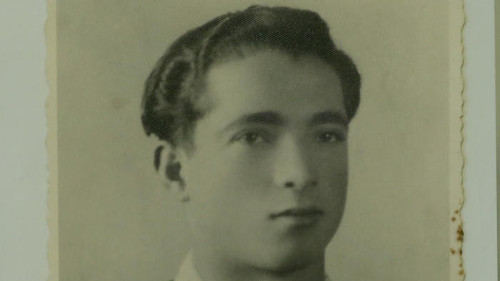 Harold Katz as a young man

“They went up and down the streets, ordering the Jews to get dressed quickly and come to the synagogue. I remember it as if it was yesterday. The trucks coming down the street. How we were loaded up,” Katz said. The trucks took them across the border to Poland where they were ordered out and left beside the road without food, shelter or water. 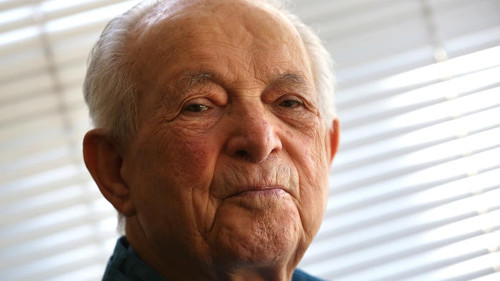 “We ate out of garbage cans,” Katz said. They moved in for a short time with one of Harold’s aunts, but Harold’s father thought the family would be safer if they snuck back into Czechoslovakia into the city of Chust. Then a Hungarian woman offered to smuggle Harold into Budapest and with his father’s consent, she hid Harold under a wagon of lumber and brought him into Hungary. The rest of his family stayed in Chust where they were deported to Auschwitz in 1944.

Katz often speaks about how he wishes he could have saved his family. His daughter, Lila Katz, knows that her father won’t listen to her when she tried to reassure him that there was nothing that he could have done. “I tell him: ‘You were a boy, barely 13. What could you do?” 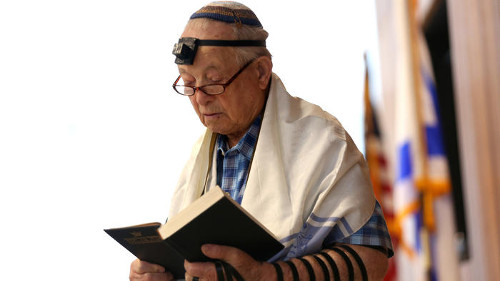 In Hungary, Katz joined an underground Zionist group that gave him false identity documents and pretended that he was a member of the Hungarian army’s youth group, wearing a cross and a red-and-white armband. He was caught three times and escaped three times. Once in jail he had to bribe a guard with a watch not to cut his hair off because a shaven head was an obvious sign of a prisoner. A different time he ran away while he was unloading wagons. In 1944, he was supposed to board a boat heading to Israel, but the boat filled up and sailed before his number was called.

When the war was ending, he was hiding in an abandoned building in Hungary next to a deserter from the German army who bragged about murdering Russians and Jews. When the Russian army liberated them, Katz told the Jewish commander about the German soldier; the Russian soldiers blindfolded the German murderer and the commander handed Katz a gun. Harold shot the soldier, but his anger at the Nazis remained within him. At the end of the war, Katz was 17 years old and assumed he had lost his entire family. But then a survivor from Auschwitz told him that his brother Maurie was still alive and they were soon re-united. 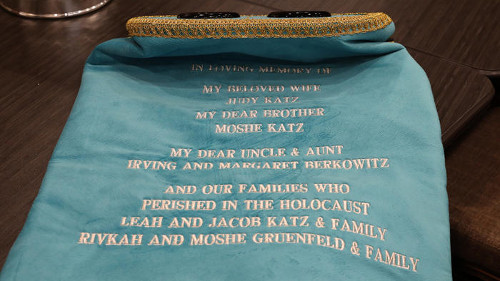 While they were living in the displaced persons camps, Harold remembered that his mother had relatives in New York, so he sent an ad with someone who was traveling there to place in the Forvertz, a Yiddish newspaper.

“Ich zich mein feter and tante,” the ad began. “I’m looking for my uncle and aunt.” Miraculously, his aunt and uncle in Chicago read the Forvertz on the day the ad ran and recognized their nephews’ names. They sent Maurie and Harold airplane tickets to America and the brothers moved in with their aunt and uncle. Harold found work as a sewing machine operator and Maurie went into construction. Eventually, Maurie built his own construction company which Harold joined, and they built homes together across Chicago for many years.

Harold met his wife Judy, a survivor of Auschwitz, at the Jewish People’s Institute where he learned English. They had two sons and a daughter, Lila. Lila says her parents never spoke about the Holocaust until 13 years ago when she saw a film about Budapest in WW II. She asked her father to take her to Budapest and show her where he had been. Harold showed her where he witnessed Jewish children being killed and pointed to a watch in a jewelry store window. “A watch like that saved my life,” he told his daughter.

Last year at a big, birthday party which his family threw for him, Harold suddenly stood up and announced: “I’m going to have a bar mitzvah.” He set about re-learning the Torah portion that he had learned over seven decades ago, and he decided to celebrate the momentous occasion by donating a Torah scroll in the synagogue, Chabad of Wilmette, which is built from Jerusalem stone that Katz himself donated to the building. 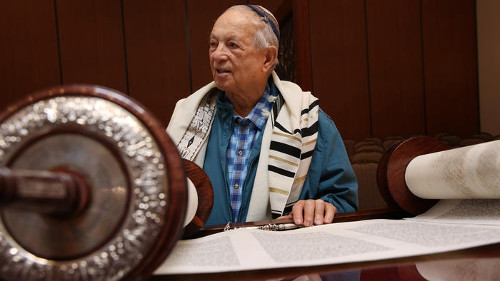 In the past few years, Harold lost his wife and his brother, and he began thinking how he would like to be remembered. He wanted to give his children and grandchildren a story that they could pass on for generations.

On Memorial Day Grandpa Katz stepped up to the bimah, touched the Torah scroll with his tallit and kissed it before reciting the blessing over the Torah. Harold Katz ultimately took back what the Nazis tried to destroy and had that bar mitzvah he had prepared for so long ago. Mazel tov Harold!

9 Facts about Jews and Egypt

Young American Jews & Israel
The Blue Beyond
Great Place to Live
Is Eating Supposed To Be Spiritual?
Comments
MOST POPULAR IN Israel
Our privacy policy